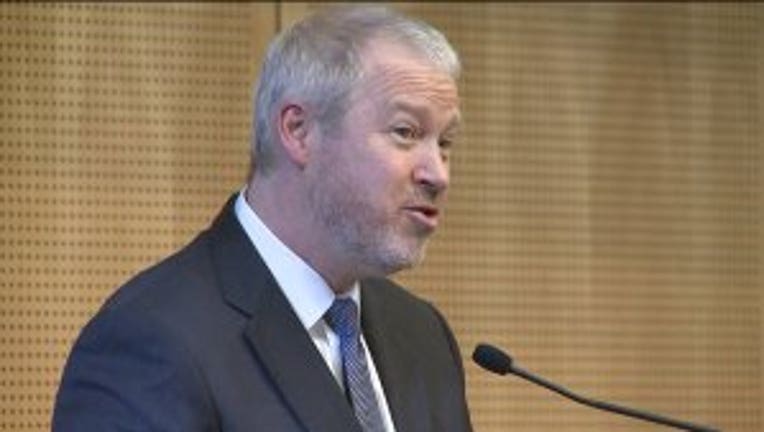 SEATTLE -- Seattle Mayor Mike McGinn delivered the annual State of the City address Tuesday, his final before the November election.

It was an extremely upbeat message by McGinn, highlighting a long list of good things he says has happened in city government in the last three years; everything from the passage of the library levy, to transit improvements, to record recycling rates.

“We have one of the strongest economies in the nation,” McGinn said. “I think those progressive policies and strong economy go together.”

After a rocky first year where McGinn was mired in a losing fight over the viaduct tunnel, the mayor now wants to give the impression that he’s able to build coalitions and get things done.

“Working with King County, we’ve laid the groundwork for hundreds of millions of private investment and new jobs so that we can bring back the Sonics,” he said.

With two well-funded challengers looking on, McGinn addressed the issue of public safety, something that has dogged him for the last few years as he engaged in hard negotiations with the Justice Department.

“With a spotlight on policing unlike any in recent decades, we’ve continued to bring down our crime rate,” he said. “I believe this community, together with our police force, can squarely confront our challenges.”

McGinn’s goal:  “To have the safest city and most trusted police force in the nation.”

The mayor also made a handful of announcements at Monday's State of the City address. First, he said the city will start an Early Learning Academy to help train workers employed in the preschool-through-kindergarten field. Second, Seattle will soon conduct another gun buyback.

City Council member Bruce Harrell, who sat on the dais near the mayor Tuesday said the speech was goodbut lacking.

“He’s describing a vision a little late in the game,” he said.

Harrell criticizes the mayor for not working closer with the council and community.

“You have to be collaborative,” he said. “I don’t think that what he understands is he’s part of a much larger ecosystem.”

Also in attendance at today’s speech was former councilmember Peter Steinbrueck, another challenger to McGinn in this year’s Mayor’s race.

“I am hearing an outcry from neighborhood voices all over the city,” Steinbrueck said. “That outcry is dissatisfaction with the way this administration has conducted its affairs and set its priorities.”