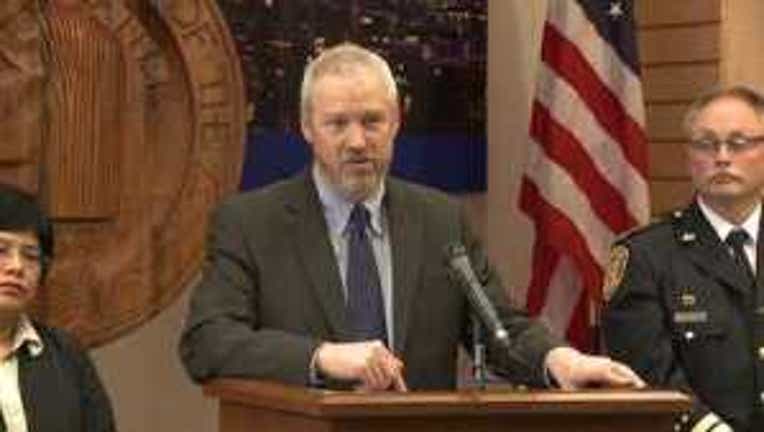 Seattle Mayor Mike McGinn on Thursday announced a sweeping set of Seattle PoliceDepartment reforms in response to an investigation by the  U.S. Justice Department  into high-profile complaints of excessive force by police officers.

McGinn said the reforms will help regain public trust and credibility. “Our goal is reform, and that is what we are going to work on,” he added.

The mayor released his list of changes one day before the Justice Department is expected to give Seattle recommended major reforms for its police department.

“We are going to negotiate in good faith to reach a mutually acceptable agreement,” McGinn said of the Department of Justice recommendations. “I can’t predict how long that will take, because we want to get it right.”

The DOJ recommendations have been expected ever since it released its investigative findings in December that said one-fifth of the time officers use excessive force in Seattle and they violate the constitutional rights of suspects.

The SPD pushed back hard when the findings were announced, but the city has since said that it will work with the DOJ to make whatever reforms are necessary.

The reforms also include improving reviews of "uses of force," develop a binding, written code of ethics, provide better information to the public and "improve transparency and accountability."

It`s an ambitious package and an ambitious timeline -- 20 reforms McGinn wants to implement in the next 20 months.  Many will see this as an attempt to get out ahead of any mandates that may be coming from the federal government.

“I answer to the voters of Seattle, and I answer to the public,” McGinn said. “This is responding to their concerns that I have heard from community after community. You know, if my only job is to work with the DOJ, then I am not doing my job.”

“It’s the right thing to do,” said Seattle Police Chief John Diaz, who joined the mayor for the announcement.  “We’re continuing to get closer to our community.”

The American Civil Liberties Union said it was "encouraged" that the city was identifying steps in the police department that need improvement. But indicated that was not enough.

"We urge the city to speedily negotiate a consent decree with the DOJ that will include a monitor and court oversight," said ACLU Executive Director Kathleen Taylor. "Seattle cannot solve the longstanding problems of SPD culture and accountability without that assistance.

"A consent decree is critical to ensure that reforms are thoroughly implemented and are sustained in the long term," Taylor said.

The mayor didn’t put a price tag on his reforms, which could easily be in the millions, nor did he offer a plan for where he might find the money. Currently the city faces $40 million budget shortfall.

“We’ve got some hard choices in front of us,” he said of the funding challenge.

Many member of the city’s minority communities have been pushing hard for these kinds of reform for years. Some expressed caution about whether this plan will make the needed difference.

One person who was absent from Thursdaay's City Hall press conference was City Councilman Bruce Harrell, chairman of the public safety committee, which deals with police matters. He only learned about the event Thursday morning.

“I was hoping that we could have been more collaborative on reaching that point,” Harrell said.  “I wasn’t aware that those discussions were even occurring.”

He said he looks forward to giving input to the mayor’s plan.

The mayor didn’t put a price tag on his reforms, which could easily be in the millions, nor did he offer a plan for where he might find the money. Currently the city faces $40 million budget shortfall.

“We’ve got some hard choices in front of us,” he said of the funding challenge.