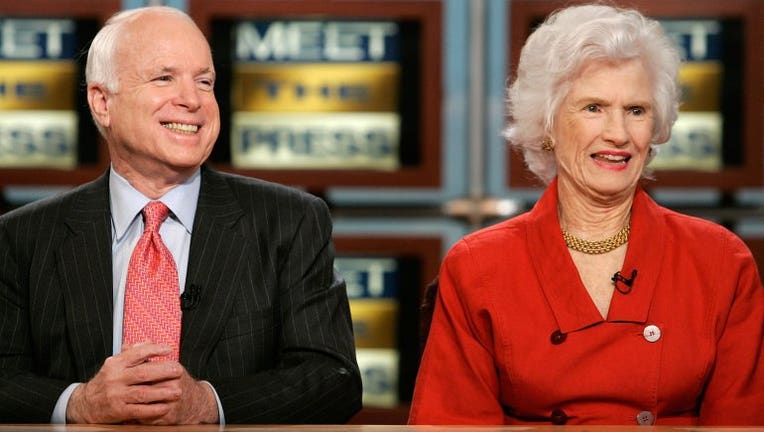 Roberta McCain, mother of then-presidential hopeful Sen. John McCain (R-AZ), speaks during a taping for a broadcast on the "Meet the Press" website at the NBC Studios May 13, 2007 in Washington, DC. (Photo by Alex Wong/Getty Images for Meet the Press


WASHINGTON (AP) — John McCain's rebellious streak didn't come out of nowhere. His mother, Roberta, had a habit of speeding behind the wheel and racking up tickets. When told during a trip to Europe that she was too old to rent a car, she went out and bought a Peugeot. Her son once answered the telephone to hear his mother say she was on a cross-country driving trip — by herself, in her 90s.

Now 106, the wife of a Navy admiral and mother of a Navy captain lived a life full of travel and adventure, punctuated by her sass and determination.

She once said her son liked to hold her up as an example of "what he hopes his lifespan will be."

But in the end, she is mourning him instead of the other way around.

Though slowed by a stroke, she is expected to attend memorial and burial services in Washington and Maryland later this week for the middle son she called "Johnny," the Vietnam prisoner of war, congressman, senator and two-time presidential candidate who died of brain cancer on Saturday at age 81.

The senator said in one of his books that "my mother was raised to be a strong, determined woman who thoroughly enjoyed life, and always tried to make the most of her opportunities. She was encouraged to accept, graciously and with good humor, the responsibilities and sacrifices her choices have required of her. I am grateful to her for the strengths she taught me by example."

McCain's father, too, had a penchant for living large, with the senator recalling that a predilection for "quick tempers, adventurous spirits, and love for the country's uniform" was encoded in his family DNA.

A native of Muskogee, Oklahoma, Roberta Wright was nearly 21 and a college student in southern California when she eloped to Tijuana, Mexico, in January 1933 with a young sailor named John S. McCain Jr. He would go on to become a Navy admiral, like the father he shared a name with, and the couple would have three children — Jean, John and Joseph — within a decade.

With her husband away on Navy business most of the time, Roberta McCain raised the kids. She didn't complain, and loved Navy life. The family lived in Hawaii, the Panama Canal Zone — where the senator was born in 1936 — Connecticut, Virginia and many points in between.

"To me, the Navy epitomizes everything that's good in America," she told C-SPAN in 2008 during the presidential contest John McCain lost to Barack Obama.

John McCain followed his father and grandfather's footsteps into the U.S. Naval Academy in Annapolis, Maryland, where he'll be laid to rest on Sunday. He became a fighter pilot and joined the combat action in Vietnam. He was on his 23rd bombing run over North Vietnam when he was shot out of the sky and taken prisoner in October 1967.

His parents were in London getting ready to attend a dinner at Iran's embassy when a special phone that Roberta McCain says she never touched rang while her husband was in the shower. She answered and listened as a friend told her two planes had been shot down and none of the pilots had ejected. She told her husband when he came out of the shower, and they kept to their plans.

"We went and decided we were not going to say one word at this dinner," she said in the 2008 interview.

She said that later learning her son was alive and had become a prisoner of war was "the best news I ever had in my life."

Roberta McCain missed watching her son's release from Vietnam on television in 1973. Someone telephoned and told her to watch the TV, something she said she did little of. "These people came off and the television stopped, so I turned off the television," she explained. "I didn't know that between ads he did come off ... and I missed it."

She later said she was "ashamed" of her son for the "terrible language" he used toward the Vietnamese captors who tortured him.

"I never would have believed in this world he would ever use language like that, but he did," Roberta McCain said in the interview, which was conducted at her Washington home.

Well into her 90s, she became a fixture on John McCain's 2008 campaign, connecting with audiences and displaying some of the sass and wit he appeared to have inherited from her.

John McCain wrote in his final book, published this year, that his 106-year-old mother's "vivaciousness is a force of nature" but that although a stroke has slowed her once-brisk pace and has made speaking a "chore," she still has "a spark in her, a brightness in her eyes that would light up the world if she could resume her peripatetic life."

Roberta McCain and her identical twin sister, Rowena Wright, who died in 2011, often traveled around the world together.