TACOMA - The City of Tacoma’s mayor is responding to protests over a police officer driving through a crowd of people and running over some of them Saturday night.

Police say an officer was responding to calls regarding street racing. Police say when the officer arrived a group of people surrounded the officer’s car and began banging on the windows. Police say the officer, fearing for his safety, tried to get out of the area, but in doing so, hit several people with his car and ran over one person.

At least two people went to the hospital.

"For those who woke up this morning feeling outraged, or frustrated, angry, shocked, hurt, scared, I understand, because I feel the very same way about what we witnessed last night," said Mayor Victoria Woodards.

Over the last eight months, Woodards has worked to rebuild the relationship between Tacoma police and the city, after tensions rose to the surface following the death of Manuel Ellis.

Woodards says while this incident is a step back in that progress, it is more of a reason to keep working toward change.

"The reality is that when you’re trying to make this kind of change, you do take several steps forward and then sometimes a step back, but what I want us to remember is you can’t give up," she said.

Woodards asks the community to be patient while the outside agency’s investigation continues. She says she has faith when the investigation is completed, the appropriate actions will be made.

She says this incident only makes her more focused on the need to bring change.

"We can fix it, and I have to believe that because it’s my job to get up every single day and work toward that change," Woodards said.

On Sunday, a group of about 150 – 200 people protested the incident. They marched through the city setting fires, spray painting, and smashing windows.

Community members came out to try and clean the damages and put out a fire.

Tacoma police say they had no reports of injuries.

The patrol officer involved in the incident, a 58-year-old man, has been with the department for more than 29 years.

The officer was placed on paid administrative leave per department policy on the evening of January 23 immediately following the incident.

Tacoma City Council is holding a special meeting on Monday at 4:30 p.m. to discuss the incident. 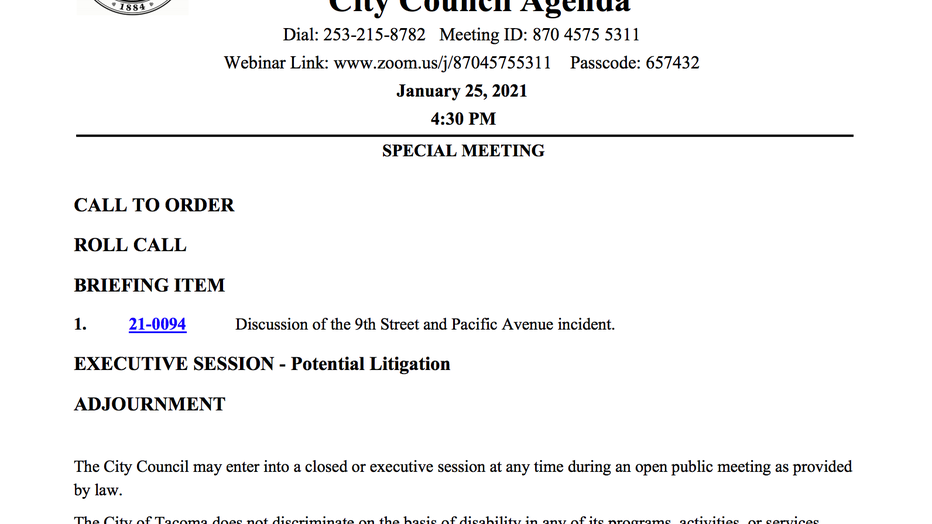