First Look: Back To Win | MASTERCHEF

Gordon Ramsay, Aarón Sánchez, and Joe Bastianich as well as returning contestants introduce you to the new season of MasterChef Back To Win.

Chicago - Welcome back to "MasterChef" recaps! In episode 6, "Feeding the U.S. Coast Guard," the chefs head outdoors to feed 100 service members in a hotly-contested team challenge. Who sinks and who swims? Let’s find out! Miss a week? You can read our recaps and watch On Demand, on FOXNow, on Hulu and on Tubi, FOX’s free streaming service. This television station is owned by the FOX Corporation.

There are two truths that are self-evident in every "MasterChef" season: one, there will be a high-pressure outdoor team challenge, and two, Gordon Ramsay will yell and throw food in the air during said challenge. And just as surely as the sun rises, here we are with the first team challenge of the "Back to Win" season, as the eighteen remaining cooks stride out to a Los Angeles pier to find Coast Guard helicopters and boats racing towards them.

Naturally, Gordon, Aarón Sánchez and Joe Bastianich are all definitely, absolutely at the helm of these vessels, and before you know it they’ve docked and are ready to hand down this week’s challenge: to serve 100 Coast Guard members in an outdoor feast.

This is "Back to Win," so the chefs have all been through the team-challenge wringer — notoriously one of the show’s most harrowing, tension-inducing rounds — and are justifiably spooked. But hopefully, that experience will also teach them how to weather it better this time. (Spoiler alert: it doesn’t.) 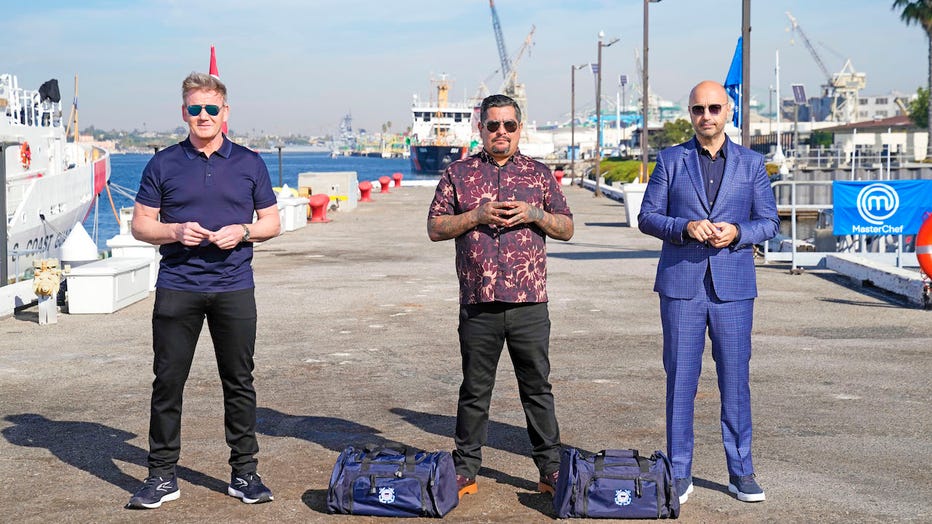 "MasterChef: Back to Win": A tale of two captains

Gordon splits the chefs up by season to form two teams: the blue team has everyone from seasons 1-7, while the red team includes cooks from season 8 and beyond. Shanika’s not happy to be paired with Emily again, since the latter called her "sassy" in their last team challenge together; guess the feud’s still on! The crew must pick their own captains, so the blue team chooses Christian (because he really wants it) and the red team goes for Alejandro (because, well, no one else put their hand up).

From there, they start conceptualizing and cooking, and we immediately see that Team Red and Team Blue suffer from opposite problems. For Team Blue, it’s Christian’s overbearing, dictatorial nature: He settles quickly on a Cajun-style dish, featuring spiced cod, garlic mashed potatoes, corn maque choux (a Cajun corn and peppers dish), grilled asparagus and tomato gastrique, without taking suggestions from anyone else. He also, it must be said, yells a lot, to the point where both Derrick and Brandi have to tell him to chill. "I know this is the way you work, but don’t yell at me," Brandi warns. 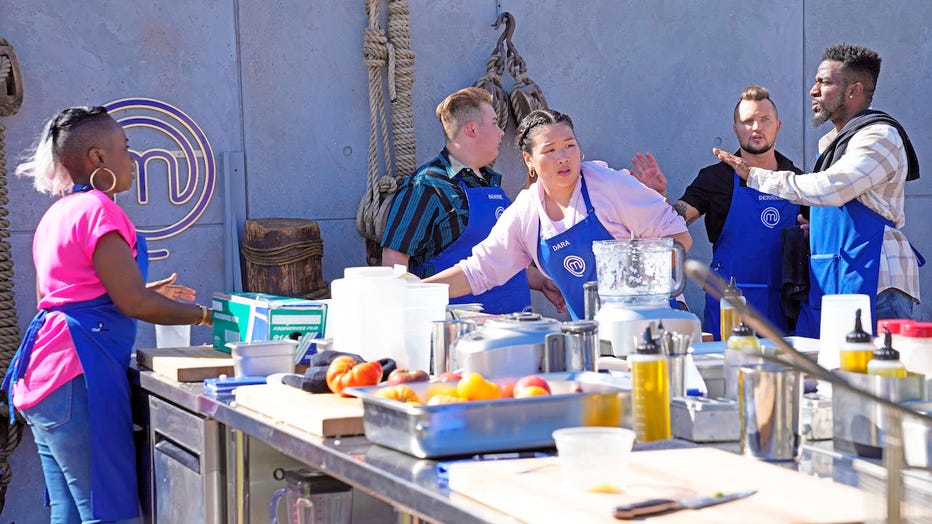 If the blue team is bristling under a taskmaster, Team Red flails with no leadership at all. Poor Alejandro, who lost his season 11 team challenge also as captain, hasn’t learned any lessons, trying way too hard to defer to his team without giving them any structure. Plus, once they decide to do a New York strip with broccolini, roasted potatoes, mushrooms and chimichurri, he spends most of his time at the grill flipping steaks instead of checking in with his team. ("He’s like a dog with a bone," Shanika notes.)

It’s not long before the heat rises in both kitchens. Christian’s got a short fuse, so when he sees Derrick boiling potatoes in three separate pots (because, you know, it takes a long time to get a single huge pot of water boiling), he ends up dumping hot potatoes into cold water. And neither team’s test dish impresses the judges: Team Red’s strip was raw and under-seasoned, while Team Blue’s cod is too sweet and not at all spicy.

In classic "MasterChef" fashion, it only gets worse from there. Christian’s starchy blunder means the mashed potatoes aren’t finished by the time 18 pieces of cod are already cooked, which means long lines of impatient Coast Guard members just standing awkwardly in front of Team Blue’s table. But at least it gives us a few solid minutes of Gordon shouting "WHERE’S THE POTATO?!?!"

"MasterChef: Back to Win": A big mis-steak

Team Red doesn’t fare much better, as their first steaks are cold by the time they’re starting to plate. Alejandro remains silent, and Michael begins to discreetly lead the team. It’s not quite enough, though, as one Coast Guard member gives Gordon the opening we’ve all been waiting for: a rare steak that’s "still mooing," which Gordon brings back to Team Red’s kitchen so he can shout at them and (that’s right) fling the chunk of raw beef into the California sky. (A later cutaway reveals that a gull got it: Enjoy that beef, buddy.) 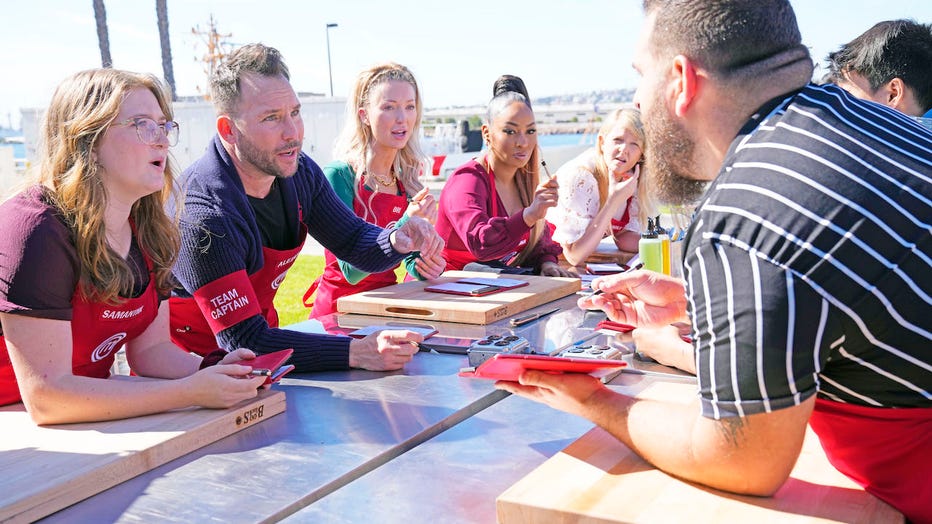 But that’s only the first of Team Red’s protein debacles, and the second one is a doozy. Alejandro performs what should be a disqualifying offense for any cook, let alone a "MasterChef" contestant: After dropping a tray of steaks on the ground, he picks them back up and throws them on the grill. Gordon looks on, horrified, and calls him over. Alejandro’s explanation is sure to be the stuff of "MasterChef" legend:

"Chef… I thought the heat would kill the bacteria."

It’s so scandalous, Fred gasps in horror (and he’s not even up for elimination, since he won last week). Gordon stares at him dumbfounded, and so, I presume, does everyone watching at home: The five-second rule is suspect even in the privacy of your own (indoor!) kitchen, and it certainly doesn’t fly in a professional culinary setting, whether you’re cooking for active service members or not. Gordon immediately fires Alejandro from leadership, and the team quickly rallies around Michael, who’s been quietly building up to this moment. Suffice to say, the stakes have never been higher, and the steaks have quite literally never been lower (to the ground).

While Michael makes a solid show of rallying his team, it’s too little, too late: Team Blue handily wins the challenge, 71-30. That’s an admirable feat, considering Christian’s self-sabotage and all the yelling (for which he apologizes to his team as he thanks them for their hustle).

That said, the judges look quite unhappy with both teams. And as if there could be any other choice after the stunt he pulled, Alejandro is the member of Team Red asked to leave the competition. Gordon stresses that he’s never seen someone in the competition, let alone one of his own kitchens, attempt to cook and serve food they’d just picked up off the ground, and the other judges agree.

To Alejandro’s credit, he takes it in stride, considering it a teaching moment. He’s the third semifinalist in a row who’s been eliminated on "Back to Win." As Gordon warns the chefs, past performance remains no guarantee of success — but the remaining 17 chefs will live to cook another day. 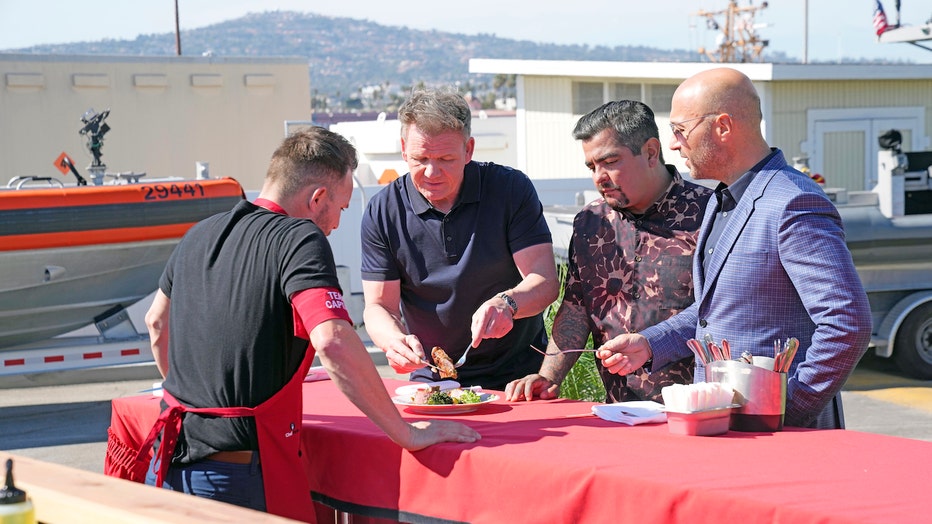 No real dish of the night, since there were only two dishes and the team challenge focus means we didn’t get a good look at either of them. So instead I'll use this space to gush about the two seals we see frolicking on a floating buoy!

Next time on "MasterChef"

The chefs cook vegan for Gordon when "MasterChef" returns on July 13.

"MasterChef" airs Wednesdays on FOX. The first six episodes are also currently available to stream on Hulu. Recaps run weekly, and you can read them all below.

About the writer: Clint Worthington is a member of the Chicago Film Critics Association. He is the founder and editor-in-chief of The Spool, and a Senior Staff Writer at Consequence. You can find his other work at Vulture, Nerdist, RogerEbert.com and elsewhere.

"MasterChef" airs Wednesdays at 8 p.m. EST on FOX. You can also watch On Demand or stream online via FOXNow.All 12 seasons of the show, including the first six episodes of the current season, are streaming on Hulu. And there’s a whole world of "MasterChef" streaming free on Tubi, including beloved series "MasterChef Junior" and several international editions.