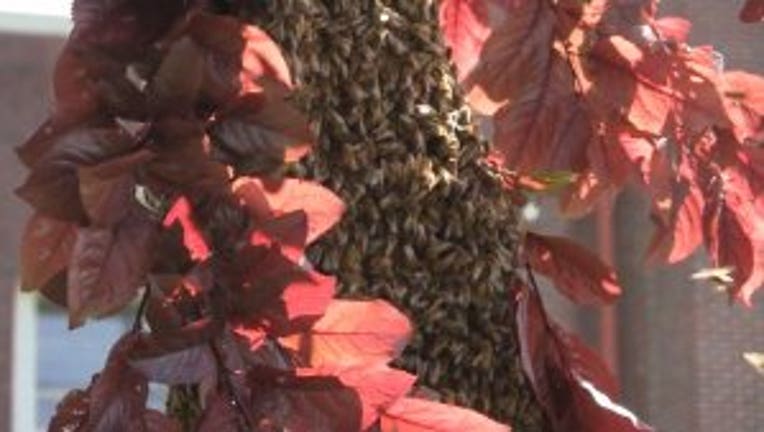 A swarm of bees settled on a tree outside of a junior high school in Estacada, Ore., Thursday. (Photo: KPTV/Portland via Estacada Eagle)

Estacada is 30 miles southeast of Portland.

Once the swarm of bees arrived on campus around 10:30 a.m., administrators said they immediately made sure all students and staff were brought indoors.

"I just kept looking, like 'where does it stop?'," said principal Tina Rhue. "It was kind of like Alfred Hitchcock's 'The Birds,' but it was the bees."

She estimated the size of the swarm was "probably half of a football field in length or greater. It was tremendous."

The bees were spotted near the school building and eventually balled up in a large tree along a sidewalk at the school.

School staff notified a beekeeper, Dave Imholt, who arrived on campus to remove the bees.

Imholt estimated he collected around 5,000 bees. He said the swarming bees were not likely to sting anyone.

"They're all gorged full of honey and their purpose right now is to reproduce and make a new colony somewhere else," he said. "That's what they're really after, so they're not interested in us. Honeybees are never interested in us unless we're disturbing them."

All outdoor breaks and P.E. classes were canceled for the afternoon.