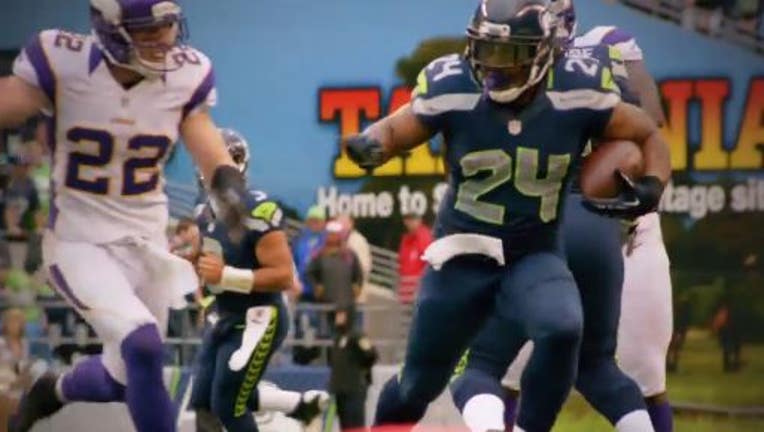 Tony Drovetto/Seahawks blog -- Good morning, and here’s what’s “out there” about the Seahawks for today, January 4 – two days prior to their Wild Card game on the road against the Washington Redskins.

Danny O’Neil of the Seattle Times highlights the play and persona of running back Marshawn Lynch, “For all the attention the quarterbacks in Sunday’s game are bound to get, it’s Lynch who is the foundation for Seattle’s offense. ‘He’s as smart a football guy as I’ve been around,’ said Tom Cable, the Seahawks’ assistant head coach. ‘Some people don’t get to know that because he won’t share that with you. He won’t open up very much.’ This is by choice after a career that has seen him praised as a prodigy in Buffalo, celebrated as a Pro Bowler and later characterized as a pariah. And nearly three years into his second chance in Seattle, we’re still trying to get a picture of what this Skittles-chomping, defense-stomping force of nature is really like. ESPN.com NFC East blogger Dan Graziano has a video preview and prediction of Sunday’s Wild Card matchup between the NFC East champion Redskins and the Seattle Seahawks.”

Quarterback Russell Wilson has been nominated for NFL Rookie of the Year ’12, and you can cast a vote for Wilson here. Our Insider Clare Farnsworth has more on the rookie Wilson and those that are challenging him for the honor here.

Larry Stone of the Seattle Times says containing Redskins running back Alfred Morris will be a priority for the Seahawks on Sunday, “Morris outrushed Lynch by 23 yards this season. And whereas Lynch is rightly lauded for his relentless running style, Morris has more yards after contact than Lynch, 643 to 558. Shanahan saw that play-sustaining ability when he watched tape of Florida Atlantic before the draft. ‘Here’s a guy that was on a football team that didn’t have a great record, and you could see some runs — some 4- and 5-yard runs — that we thought were special at the time,’ Shanahan said. Coupled with Griffin, whose running ability is well-documented, Morris presents a formidable challenge for the Seahawks defense. ‘They force you to play sound football, because if you don’t, they’re going to expose it,’ defensive tackle Alan Branch said. ‘That’s what their offense is meant to do. Hopefully, we read our keys and stay in our zone, and hopefully we can knock it out.’ “

Joshua Mayers of the Seattle Times catches up with cornerback Brandon Browner, who returned from his month-long suspension earlier this week, “Coach Pete Carroll said Wednesday that the team will see how rusty Browner is after the month away. Defensive coordinator Gus Bradley said Browner has been doing extra work in practice to help regain his sharpness. So does Browner think he’ll be ready for Sunday’s playoff game at Washington? ‘Most definitely,’ he said. ‘It starts in the head, mentally. I’m mentally tough. I know I’ll be a little bit tired out there, but at the end of the day I’m fighting for a playoff victory, so I’ll be all right.’ “

John Boyle of the Everett Herald writes the Seahawks are confident their early season road struggles are behind them, “That win in Chicago helped spark a 5-0 finish, which included three consecutive blowouts, and another road victory over Buffalo in Toronto. Heading into what they hope is the first of three road playoff games — again, assuming Minnesota doesn’t win two playoff games as well — the Seahawks are confident that their game now travels well. ‘We had trouble on the road early in season, but lately we’ve been playing great ball, home or away,’ safety Earl Thomas said. ‘We’re very excited about this championship opportunity. It’s a big stage. We’re blessed to make the playoffs and we’re going to make the most of it.’ “

Boyle also passes along Thursday’s injury report for both clubs, noting rookie cornerback Jeremy Lane did not participate with a knee injury, and Lynch was a full participant after a limited outing on Wednesday when he rested his back.

Brady Henderson of 710Sports.com says the Redskins will present a challenge for the Seahawks run defense, “The Seahawks held three of their final four opponents to fewer than 90 yards rushing. But while that might suggest an end to their struggles against the run, it could have also been a product of the way the games played out. Seattle jumped out to early leads in three of them, forcing opponents to throw the ball more in an attempt to catch up. Sunday’s game should provide an answer as to whether or not those issues are a thing of the past. Washington’s offense is similar in many ways to Seattle’s in terms of style and personnel. Both teams run a variation of the option, each with a powerful running back and a dynamic rookie quarterback who can beat teams with his arm and legs.”

Brock Huard and Mike Salk of 710 AM ESPN Seattle’s “Brock and Salk” discuss the candidacy for Rookie of the Year in this short video.

Tim Booth of the Associated Press writes that Russell Wilson is ready for the big stage of the NFL playoffs, “While this is his first time in the NFL playoffs, the feel and sense around the team’s facility reminded Wilson of his preparations a year ago when he was getting ready to lead Wisconsin in the Rose Bowl against Oregon, a game the Badgers lost 45-38. Offensive coordinator Darrell Bevell didn’t hesitate earlier in the week when asked if he was worried about Wilson getting too wrapped up in the noise of the postseason. ‘I just expect him to be very poised, have everything under control and play well,’ he said.”

Jarrett Bell of USA Today takes a look at the way teams have built winners through the NFL draft, “If he isn’t already, Seattle Seahawks quarterback Russell Wilson might be held up as another example of how many teams miss on great potential. Wilson, 5-11, was considered too short to be a first-round pick despite his production at North Carolina State and Wisconsin, smarts and athleticism. He lasted until the third round, 75th overall. Wilson joins RGIII as the only qualifying rookies to post 100-or-better passer ratings, and he tied Peyton Manning’s NFL rookie record with 26 touchdown passes. ‘After he got here, you didn’t know how tall he was,’ Seahawks coach Pete Carroll said this week.”

Mike Sando of ESPN.com has his “best guesses” for Week 18, picking the Seahawks over the Redskins, 24-17, “The Seahawks are the only road team favored by oddsmakers in the wild-card round. They are healthier than the Redskins and have the healthier, hotter quarterback now that Seattle is running more of its offense through Russell Wilson. Redskins quarterback Robert Griffin III remains a threat, of course, particularly on play-action throws. The Seahawks’ run defense also will be tested in this game. Those are concerns for Seattle. But with Griffin limited by a knee injury, the Seahawks should end a playoff road losing streak that dates to the 1983 season.”

Sando compares and contrasts the play of the Seahawks’ Lynch and Redskins’ Morris.

And we close out today’s “cyber surfing” with Sando’s “Final Word” on Sunday’s Wild Card matchup, “Rookie showcase. Washington’s Robert Griffin III (102.4) and Seattle’s Russell Wilson (100.0) are the only qualifying quarterbacks in NFL history to finish their rookie seasons with NFL passer ratings in triple digits. They also are the first full-time rookie starting quarterbacks to face one another in an NFL playoff game. Houston’s T.J. Yates was a replacement for Matt Schaub when he went against fellow rookie Andy Dalton in the playoffs last season. Wilson and Griffin aren’t alone among rookies playing prominent roles for their teams. The Redskins, led by Griffin and 1,600-yard rusher Alfred Morris, have a league-high 46 touchdowns passing, rushing or receiving from their rookies this season. The Seahawks and Indianapolis Colts are tied for second with 30 apiece. Seattle also got 12 sacks from its rookies. Bruce Irvin had eight of them. Middle linebacker Bobby Wagner finished his rookie season with 140 tackles, three interceptions and two sacks as an every-down player.”