FUGITIVE CAPTURED April 11, 2013 -- The Pacific Northwest Violent Offenders Task Force in Yakima apprehended Keith Cain this morning. The tip came from a source who recognized Cain being on a local Yakima County Crime Stoppers Flyer. FUGITIVE WANTED IN YAKIMA COUNTY April 5, 2013 -- Missing ‘high-violent’ offender, Keith Cain, calls himself ‘Red Rooster’. He’s wanted by the Department of Corrections for Escape in Yakima County. He served time for manslaughter after using a whiskey bottle as his weapon in a brutal, booze-fueled – and bloody attack. "Cain and a friend were drinking all day, says DOC Ofc. Emily Isaacs. “They got into an argument. He proceeded to take the bottle of whiskey they shared, smashed it over his head, proceeded to stab the victim multiple times, cutting him across the face and the neck. Just before he left he stabbed him with one more piece of the bottle. Neighbors found the victim dead in their yard the next morning." When Cain was locked-up once, he knocked out another inmate whose head smashed into the ground, cutting it. Here are the details on KEITH CAIN: 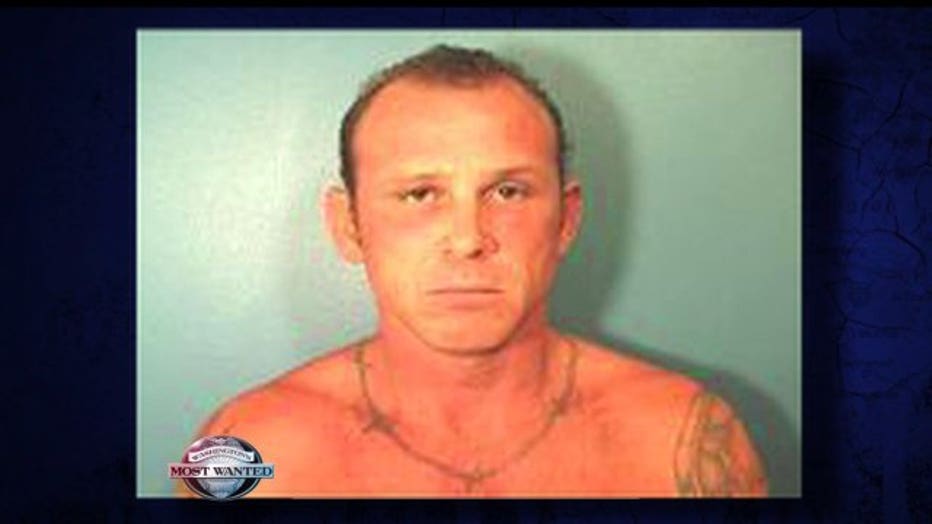 His shirtless mug shot shows the shoulder tattoo he has, and that barbed-wire necklace he's inked with around his neck. If you have the tip that can cage the ‘Red Rooster’ in Yakima County, call an anonymous tip into: CRIME STOPPERS: 1-800-222-TIPS You must call the Crime Stoppers hotline with your tip to be eligible to receive a cash reward for information leading to a fugitive’s arrest. CLICK HERE for information on how to TEXT A TIP to Crime Stoppers. ,