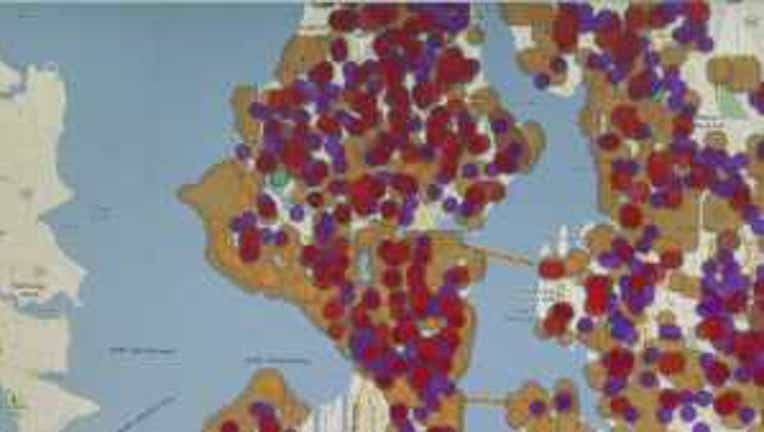 SEATTLE -- After voters in Washington last month approved the legalization of marijuana, the state Liquor Control Board started working to draft rules and regulations for future pot retail stores. But the law, as originally written by the Legislature, will make it tough to open any shops in Seattle.

Ben Livingston, a local marijuana activist with the Center for Legal Cannabis, has created a map showing that pot retail stores will basically be outlawed within Seattle city limits. That's because, according to the new law, these stores can't be located within 1,000 feet of most places where kids are gathered.

Livingston uses colored dots on his map to note parks, playgrounds, schools and day care facilities in Seattle. The dots cover most of the city, leaving open spots around the Sodo district and the southern areas near the airport.

Alison Holcomb, who directed the campaign to legalize marijuana, recently told Seattle Weekly that she believes voters wanted to end marijuana prohibition and weren’t as concerned with having easy access to it.

Some believe the buffer zones were created to keep federal authorities from cracking down on the state now that pot is legal.

Livingston said he believes the law will simply force pot retailers to open shops in the suburbs. He said that's not fair to the people who live in the state's largest city. “The intent of the voters was to legalize it and let them buy it in a store,” he said.

The Legislature can't make any changes to the law for two years.

Once stores open up, in another year or so when regulations are complete, they're expected to bring in a half-billion dollars in tax revenue to the state every year.