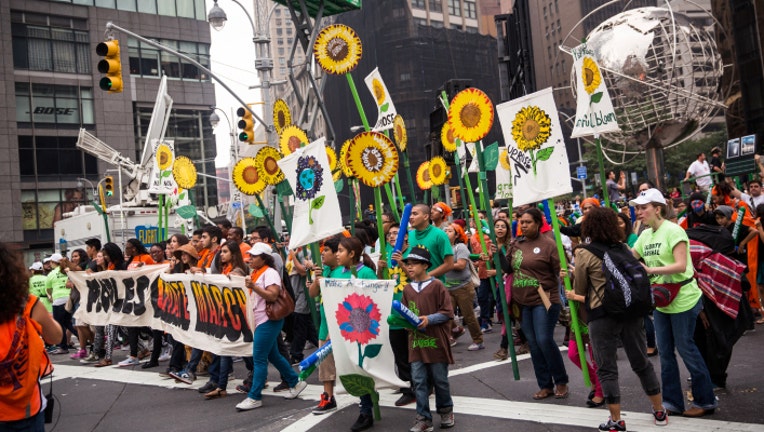 People protest for greater action against climate change during the People's Climate March on September 21, 2014 in New York City.

One marcher's sign read "cut your emissions or you'll sleep with the fishes."

The "People's Climate March" in New York was billed as the largest of several protests held around the world two days before the start of the United Nations' Climate Summit.

"I see the world changing very quickly already, and I want to do my best to give them the best world that they deserve to have and that I was fortunate to come up into," Ruffalo told CNN.

Ricken Patel, the founding executive director of march organizer Avaaz, told CNN the "solution is so clear. It's to get to a 100% clean energy power society and economy."

"We're seeing massive droughts across the Midwest and California," Patel said. "We're seeing storms that are devastating the East Coast and the Gulf Coast. We're seeing flooding that's threatened this city and many others. All of those impacts that are happening, but it is just a taste test of what's to come if we don't urgently reverse course."

The Environmental Defense Fund said it expected up to 100,000 people to walk, while the New York Police Department predicted about 30,000 would participate.

Speakers will include President Obama and DiCaprio, who was recently appointed as U.N. Messenger for Peace with a focus on climate change.