A history of the term March Madness in basketball

The term March Madness got its origins in Illinois surrounding the annual tournament of high school boys basketball teams, according to the Illinois High School Association -- which sponsored the event.

Each year the NCAA Men’s Basketball Tournament features an underdog team that upsets a powerhouse school and gains national attention.

Loyola Chicago has been one of those underdog schools in recent years. College basketball fans have gotten behind the Ramblers and Sister Jean during their runs in the tournament. The Ramblers made the Final Four in 2018 as a No. 11 seed and a regional semifinal last season as a No. 8 seed.

College basketball fans tend to get behind lower seeds like these.

"There’s a couple things. The underdogs feel more like they could be us. I think that there's this certain way that we relate to the folks who made it there but maybe aren’t coming in with as much … glory and recognition from the year," Day said.

"And I think that on a deep level, it shows that even the little guys can win sometimes," the psychologist said. "Sometimes those No. 13 seeds are still powerhouse schools that have a long history of being successful in basketball. But it's something about they're in this position. We're going to see them rise to the challenge and do things that no one's expecting them to do, which is kind of what we all often want in life. We wanna show up, and even when the odds are against us, we want to be able to do it and surprise people. I think there’s some relatability on that side of things.

"We also like to make those risky decisions in the brackets like, ‘Well, everybody thinks this is gonna happen. I’m going to pick this person,’ and then you feel so gratified when that actually happens because you didn’t just go by what the seeding is." 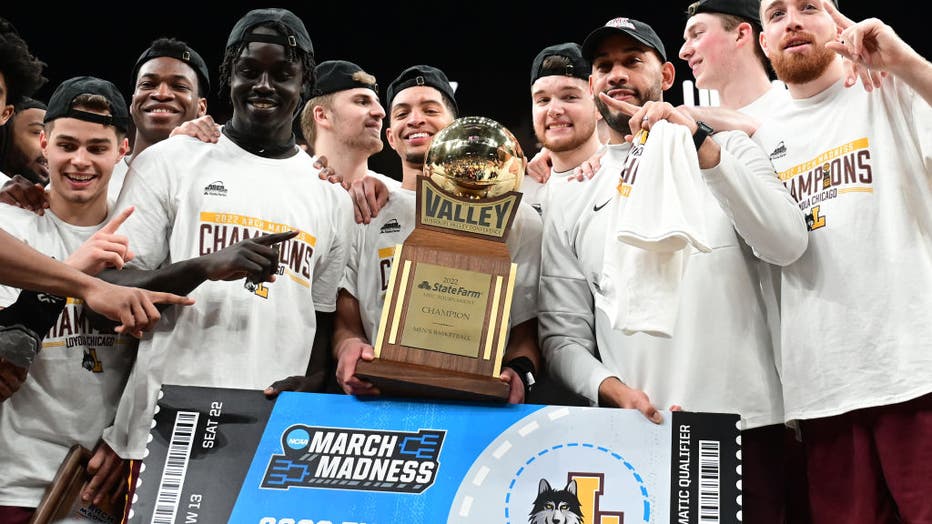 FILE - Loyola players with the championship trophy after winning the championship game of the Missouri Valley Conference Tournament between the Loyola Chicago Ramblers and the Drake Bulldogs on March 6, 2022, at Enterprise Center, St. Louis , MO. (Ph

When it comes to teams like Duke, Kentucky, North Carolina and other "blue bloods," fans love to watch them lose.

Day said it’s part of fans wanting to see the "little guy" get a victory every once in a while.

"You’ve got these powerhouse schools that are always successful or often successful, and it’s not even so much that you want to see them go down as much as you want to see the little guys succeed," Day told Fox News Digital. "You’ve got the David vs. Goliath situation where this is the obvious winner. That the way the chips are stacked, this team should win. So, how cool is it when this smaller team, maybe with less resources, less recruiting power, shows up and takes down a giant? And again, I think it’s so gratifying to see the little guy win.

"Even societally even, right? We think about that when the small local company has their best sales ever and beats out the local giant. I think it spans society that we really want to root for those who aren’t expected to win because they don’t have the same resources. And you will never hear the end of it because it’s not supposed to happen. It’s built to not happen. So, when it does, it’s also surprising, and you’ve got to thrive on that energy of ‘no one can stop us. We are capable no matter what.’"

The First Four starts March 16-17 with the first full round of the tournament beginning March 18-19.