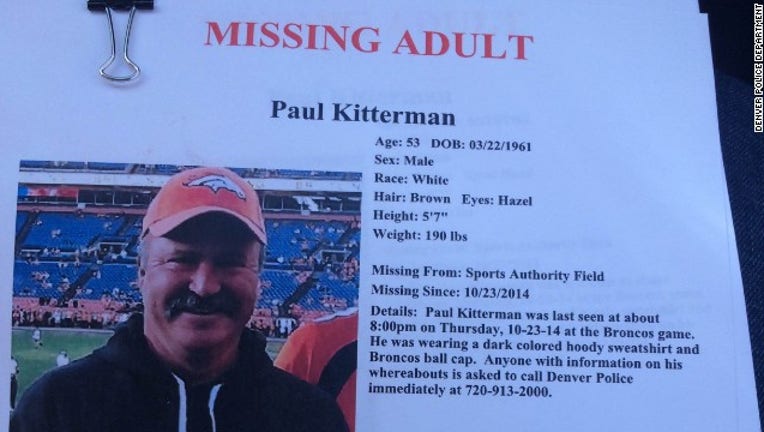 DENVER (CNN) -- Paul Kitterman, a Denver Broncos fan who disappeared during a game five days ago, has been found and is safe, the Denver Police Department tweeted Tuesday night.

Kitterman was located some 112 miles away in Pueblo, Colorado.

Police directed questions to Kitterman's family. They tweeted that there was no reason to suspect a crime was committed.

Kitterman, 53, vanished while waiting outside a bathroom Sports Authority Field at Mile High on Thursday where the Broncos were playing the San Diego Chargers.

He had gone to the game with his stepson, Jarod Tonneson, and two friends, who sat in another section in the stadium.

According to one of the friends, he waited was last seen waiting for Tonneson, who was using the restroom just after halftime.

Tia Bakke said this type of behavior is not customary of Kitterman. He was not intoxicated, and he had no mental health issues, she said.

According to CNN affiliate KUSA-TV, Kitterman didn't care for credit cards and was carrying about $50 in cash.

"Paul is the best guy you could ask for. They don't make them like Paul anymore," said Bakke, who met Kitterman through her boyfriend, who has known the missing man for a decade.

Authorities had treated the disappearance as a missing person's case, but told Bakke they believed Kitterman just walked away from the game.

He had been a passenger along with Tonneson and Bakke, whose boyfriend drove to the game from Kremmling, Colorado, which is northwest of Denver.