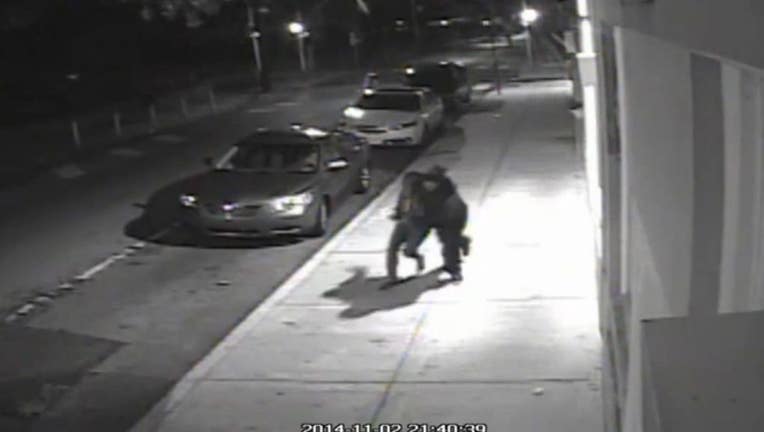 (CNN) -- Two people yell and struggle on a city street. It happens every day.

And when it does, what do you do?

Dwayne Fletcher found himself thrust into this position around 9:40 p.m. Sunday, as he was walking in Philadelphia's Germantown-Penn Knox neighborhood. He saw a man seemingly manhandling a woman, then forcing her into a car. Fletcher said he yelled out and called police.

The car sped away. But three days later, the two -- Carlesha Freeland-Gaither and the man police say abducted her, Delvin Barnes -- were tracked down 115 miles southwest in Jessup, Maryland.

The fact that they were found then and there, police say, is largely thanks to Fletcher.

Fletcher didn't stop the alleged abduction, nor did he have enough information to name either the suspect or the victim. But he did pay attention, he immediately contacted authorities, and he told them everything he knew -- something that doesn't always happen, even when crimes take place in full public view.

One of the most cited examples of the latter happened in 1964 in New York City. That's where Kitty Genovese struggled with her attacker on the street and in her building, shrieking for help as she was raped, robbed and murdered.

According to The New York Times, at least 38 people "watched a killer stalk and stab a woman in three separate attacks" over a more than half-hour period. None of them intervened. And only one called police, though only after Genovese was dead.

This, of course, isn't the only case of what psychologists and social scientists call the bystander effect or Genovese syndrome, as named after the slain New York woman.

In 2009, for instance, about 10 people watched a 2½-hour-long gang rape of a 15-year-old girl outside a Northern California high school's homecoming dance. And two years later, residents of southern China's Guangdong Province found themselves on the defensive after video came out showing passersby ignoring a toddler getting hit twice by vehicles.

That's not what happened this week in Philadelphia.

Rather, Fletcher told CNN affiliate KYW that when he saw the struggle, "I called the cops and I'm running and (yelling), 'Yo, yo, what's going on?' "

Fletcher said that he saw the woman forcibly pulled into the car, then saw her attacker get into the same vehicle.

"They were in the car for like 15 seconds. Then you just hear, like, a tap, tap on the window, and then the window come out," he told KYW, referring to how Freeland-Gaither managed to kick out one of the car's windows but not escape.

After that, Fletcher said, "I jumped back. I moved back, I didn't know what was going on. I didn't know if it was gunshots or whatever."

The witness called police twice and waited for officers to arrive, Sloan said.

And what if Fletcher hadn't? What if he'd walked away and never alerted authorities, spurring them to check that area right away for surveillance video? What if, because of that, they'd never gotten a description of the suspect and the getaway car? What if they'd never recovered Freeland-Gaither's cell phone, which police believe she dropped deliberately, hoping it'd lead to her recovery?

After all, there are too many examples of abductions that don't end, as this one did, with the safe recovery of the victim and arrest of a suspect.

Thanks to Fletcher, authorities don't have to answer any of these questions. While a great deal went into the investigation -- from several key surveillance videos, to tips, to the GPS device that a car dealer, worried about Barnes' bad credit, placed on the alleged getaway vehicle -- it all started with Fletcher.

"If it wasn't for him," Sloan said, "I don't think we would have had the same outcome."

Fletcher, who KYW reports works at a local recycling center, certainly is glad for that and happy to be called a hero.

"It feels good; I wouldn't change it for nothing," he said. "... But tomorrow's another day. I got to go to work. It's back to being Dwayne.