SEATTLE -- When running back Marshawn Lynch asked Seahawks fan John Scott in the crowd for his Native American hand drum at the team's Super Bowl victory parade last Wednesday, Scott hesitated at first, but then he gave it up.

“I was kind of concerned; he doesn't know how sacred it is to the Native community, but then when I realized, hey, this is Marshawn Lynch, he just won us a Super Bowl. So I thought it was an even exchange -- the drum for the Super Bowl,"  Scott said.

Lynch beat on the drum during much of the parade. 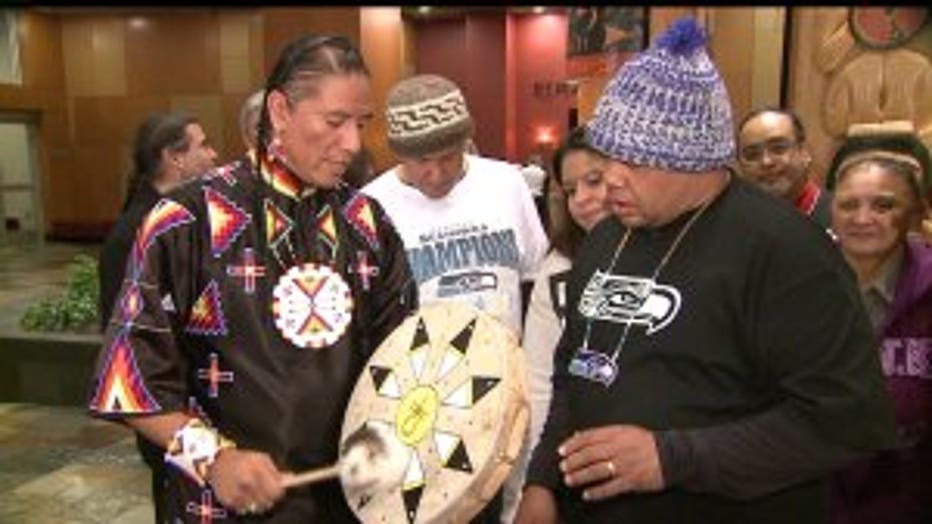 Nathan Chasing Horse, left, a medicine man with the Rosebud Lakota Sioux Nation who is best known for starring as “Smiles A Lot” in the blockbuster film "Dances with Wolves," presents a new Native drum to John Scott after Scott gave his to Seahawks r

Nathan Chasing Horse, a medicine man with the Rosebud Lakota Sioux Nation who is best known for starring as “Smiles A Lot” in the blockbuster film "Dances with Wolves," heard about Scott’s gift from Tina Hagedorn.  He takes a lot of pride in preserving his Native people’s teachings and customs.

For him, the drum is the heartbeat of Mother Earth. He uses it during healing ceremonies and said, “My people call it the Chan Chega and the Ichabu, the drumstick and the drum, what it symbolizes is thunder and lightning."

Chasing Horse said his people believe there is a purpose for everything and, though some tribal members may have frowned at first on Lynch beating the drum during the parade, he said, “When you think about it, the Seahawks won the Super Bowl and for that in itself has brought some change for the state of Washington.”

He understands the loss Scott felt when he gave Lynch his drum and was proud of him for representing the giving nature of the Native people’s culture, so during a ceremony at the Tulalip Casino, he replaced Scott’s gift with his own personal hand-made ceremonial drum, telling him. “I pray that this will serve a good purpose in the smoke house or wherever you choose to use it and so my brother friend, this is your drum.”

Hagedorn, who arranged the meeting, works with Chasing Horse on his nonprofit youth drum project organization.

"The things that Nathan and John talked about with the drum are very meaningful to our Native community and I think all of our Seahawks fans can really feel what it means to be united together by a team,"  Hagedorn said.

Beast Mode may not have known the true power of the drum he was given, the power to bring people together and to touch hearts.

"I gave it to Marshawn expecting nothing in return; so for me, to get another drum from such a special person, I'm honored," Scott said.