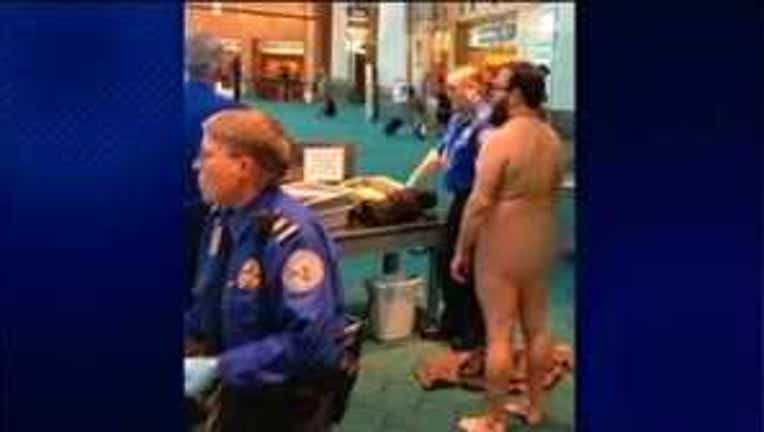 John Brennan took off all of his clothes in the security line at Portland International Airport in April 2012. (Photo: KPTV)

PORTLAND (KPTV) -- The man arrested for taking off all of his clothes while going through security at Portland International Airport is challenging a $1,000 fine by the Transportation Security Administration.

John Brennan stripped in April 2012 after a TSA agent patted him down and after he declined to step into one of the body scanners or go through a metal detector.

"I was protesting their invasion of my privacy, my Fourth Amendment right and I felt I was assisting them in showing them that I was not carrying explosives," said Brennan, who was told that some nitrates were picked up on his clothing.

As part of the protest, Brennan took off all of his clothes during the security screening. Within minutes police showed up and arrested Brennan.

The TSA, however, fined Brennan $1,000 for interfering with the screeners that day.

The TSA issued a statement saying "it doesn't normally comment on civil penalty cases … but that all its policies and procedures comport with the law and the Constitution."

"Part of the problem is that the TSA and the Department of Homeland Security have been set up so that they don't have a lot of judicial review, so the systems of checks and balances, which is designed to keep our democracy fair and square, is a little bit tilted here," said Brennan.

Brennan's hearing is scheduled for Tuesday morning at a U.S. Bankruptcy courtroom.

If he loses, he can appeal that decision to a higher court, and he says he'll continue to fight till the end.