HENRICO COUNTY, Va. - Nearly a year after a Virginia  neighborhood woke up to find dozens of vintage box television sets sitting on their front porches, the strange circumstance has happened again.

Only this time the culprits, who apparently dropped off more than 50 TVs, were caught on several neighbors' doorbell cameras.

The bizarre discoveries were made by families in the Hampshire neighborhood Sunday morning.

Michael Kroll spotted a TV set on his doorstep when he went to let his dogs outside.

"I thought my son brought it home, but apparently not," Kroll said. "I think it’s just a prank."

"They had way too much time on their hands if they had all these TVs and spread them all over the neighborhood," Kroll said. "I think it’s funny in some ways... Now if my whole front yard was covered with TVs, I’d kind of get upset."

Jim Brooksbank said he found an old, tube-style, 13-inch TV on his porch.

"It’s sort of funny... He wants to be known as the TV Santa Claus, I don’t know," Brooksbank said. "I can’t think of any technology or political point that would be valid here. It’s just a senseless prank." 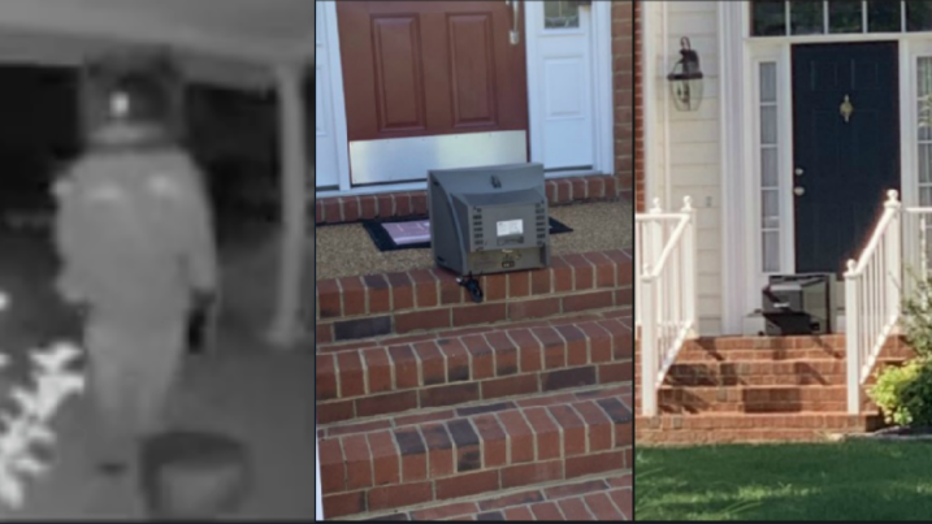 Lt. Matt Pecka with Henrico Police said more than one person "wearing a mask resembling a television" dropped off the TVs to "the majority of homes throughout the community."

"Many residents were alerted by their security devices of these unwanted deliveries," Pecka said.

As a result, Henrico Police and Solid Waste Divisions worked together to remove the more than 50 TVs.

"In just over an hour, officers were able to speak with residents and remove a lot of unwanted televisions," Pecka said.

Brooksbank said officers made quick work of collecting the TVs.

"Nobody should have to now go to the dump, pay the $3 and have to dispose of someone else’s garbage," Brooksbank said.

"It’s summer, and people are getting ready to go back to school," Brooksbank said. "Maybe TV man was just ready to strike and put a little humor in our lives."

Police urged anyone who spots suspicious activity to call Henrico County Police at 804-501-5000.

Robyn Schorr told WTVR last year that she was leaving for work on Thursday, Aug. 23 when she spotted what she assumed was a package at her front door.

"I told my husband to get the package off the front door," Schorr said.

"He took a picture of it and sent it to me and said, 'Amazon must be getting lazy. Where did you want this?'" Schorr said. "It looks like a TV from back to the future."

Schorr posted the picture on a Grey Oaks neighborhood discussion page where she found out she wasn't the only victim.

"Apparently down the road they have lots of TVs delivered to their houses," she stated. "People were calling them Trojan horses saying 'Don’t put them inside your house. Who knows what can happen.'"

Neighbors estimated more than 20 vintage televisions were left at homes throughout their neighborhood.

However, it remained unclear whether a crime had been committed.