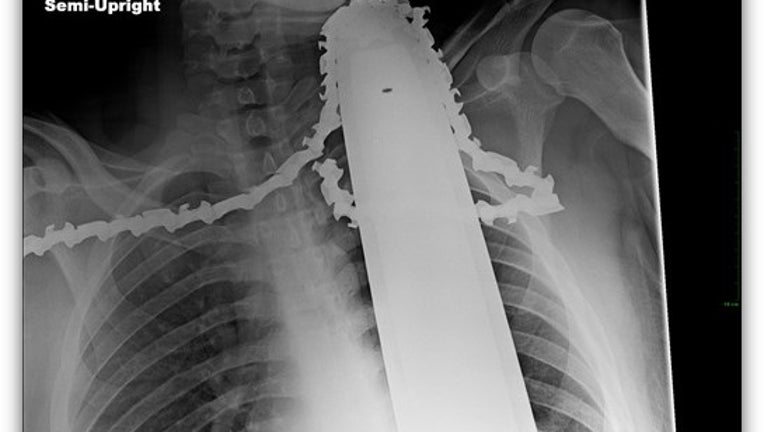 GIBSONIA, Penn -- (CNN) -- The calendar said March, but Monday clearly was Valentine's day -- James Valentine, to be specific -- when the 21-year-old Pennsylvania man survived a work accident that sent the razor-sharp teeth of a chainsaw blade deep into his neck and shoulder, and barely a centimeter from a vital artery.

Thanks to quick but cautious work by his colleagues and medical responders, 30 stitches and an hour of surgery, a day after the accident Valentine was recovering in stable condition at a Pennsylvania hospital.

"He looks more like himself, he's walking and talking today," Valentine's sister, Becca, told CNN on Tuesday. "We can't believe it at all."

Valentine was on his job with Adler Tree Service in Gibsonia, north of Pittsburgh, and was performing maintenance work on a pine tree when the chainsaw "kicked back," Becca Valentine said.

The blade sawed into flesh instead of wood. Valentine's co-workers were able to detach the blade from its motor, but they left the blade and chain where it was -- in Valentine, about a quarter of an inch from the carotid artery that supplies blood to the head -- and they held the blade in place until emergency responders arrived.

On the ambulance ride to Allegheny General Hospital in Pittsburgh, Valentine was awake and alert, according to hospital spokeswoman Jennifer Davis.

The hospital's director of trauma, Dr. Christine Toevs, said the trauma unit had 10 minutes to prepare -- to get ready for a man coming up with a chainsaw blade in his neck.

"We prepare for the worst. The unit expects the injuries to be catastrophic," she said of trauma work in general.

Toevs said this kind of injury could usually cause major damage or sever the spinal cord, esophagus, or the airway. Instead, Valentine sustained most of his injuries to muscles and soft tissue around the shoulder, rather than his neck.

After Valentine was stabilized and anesthetized, doctors removed the blade. There was no major blood loss; the blade had missed that vital carotid artery by a mere centimeter, Toevs said.