EUREKA, Utah — A Utah man has been charged with killing two missing teens after investigators found two bodies in an abandoned mine.

Baum is suspected of murdering Brelynne "Breezy" Otteson and Riley Powell, a Eureka couple who disappeared December 30 and were reported missing January 2. 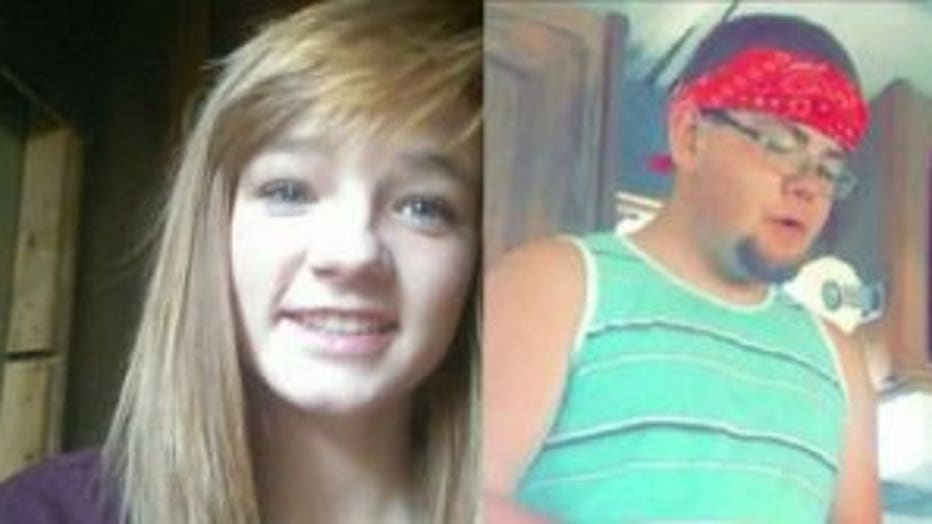 According to the Juab County Sheriff's Office, Baum had been arrested on January 30 for probation violations at his Mammoth residence. A probable cause statement indicates Baum is not allowed to possess firearms, and his girlfriend, Morgan Lewis Henderson, had purchased a .45-caliber handgun and ammunition, which she took to Baum's residence.

On Sunday, a Sanpete County Sheriff's deputy booked Henderson into jail following a traffic stop. A probable cause statement for Henderson indicates she was stopped for speeding, and arrested on one felony and several misdemeanor charges.

According to Henderson's probable cause statement, she is restricted from possessing dangerous weapons, but the deputy found her in possession of an ax, a rifle and several knives. She is also accused of driving on a suspended license, driving without insurance, two counts of possession of a controlled substance, driving with an open container and other charges.

See a timeline of the search for the missing couple

Detectives interviewed Henderson Sunday at the Sanpete County Sheriff's Office. Henderson had previously spoken with investigators because a search warrant yielded evidence she had communicated with Powell via Facebook Messenger the day before he and Otteson disappeared.

"The messages showed that Riley and Morgan agreed to meet at Morgan’s house," according to a probable cause statement for Baum. "Morgan eventually told detectives that did arrive sometime after midnight on 12/30/17 in Riley’s Jeep. They came into the residence and stayed for 40 minutes, smoked some 'weed', and left. She stated that she did not know where they went or what happened to them."

Henderson, who was living with Baum and his father, Bill Baum, told investigators she was scared to admit Powell and Otteson had visited "for fear that she would get into trouble for having people over with Jared and Bill," the probable cause statement said.

During the interview Sunday, Henderson told detectives that Baum let her know he was aware Powell and Otteson had visited.

" told he had previously instructed her not to have guy friends and that it was too bad because he has never killed an innocent before," the probable cause statement said. " said that later told her that he took care of Riley and Brelynne."

On Monday, the probable cause statement said, detectives took Morgan to the Mammoth area, where Henderson showed them a barrel believed to contain evidence in the case.

"A search warrant was obtained, and the barrel was searched. Inside the barrel detectives located a stocking that contained multiple phones that had been destroyed, several lengths of rope, used duct tape, pieces of a Marlboro cigarette carton, pieces of two knife sheaths, roofing nails, baby wipes, plastic sacks," the probable cause statement said.

Investigators and family members believe the bodies are those of Otteson and Powell.

Detectives interviewed Henderson again on Wednesday after the discovery of the bodies, and Henderson disclosed further details, according to the probable cause statement.

During that interview, Henderson told detectives Baum "came into the house and got her" after Otteson and Powell had left their home in the early morning hours of December 30.

"They went outside and she saw and [Otteson] tied up in the back of Riley’s Jeep. Morgan also stated that told her to get in the jeep and that they would go for a ride to have a talk," the probable cause statement said. "They then drove to the area of the Eureka Liliy mine. While at the mine used a knife to kill both and [Otteson] and then dumped their bodies in the mine. Then they went back to their home in Mammoth where  threated Morgan with a weapon known as a garrote. She then drove the jeep out to Cherry Creek while following Jarred who was in a truck. The truck became stuck and they used the camo tie down strap to pull it out. "

The Juab County Attorney's Office also filed a second-degree felony charge of possession of a firearm by a restricted person against Baum on February 13. According to the filing, Baum has previously been convicted of murder, theft and burglary.