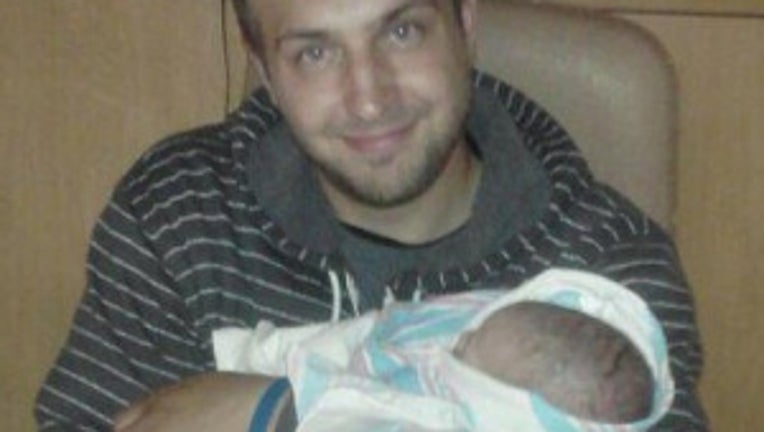 Tyler Deutsch, 25, who lives near Roy, was booked into the Pierce County Jail on suspicion of attempted murder for allegedly putting his baby daughter, shown here on April 9, in a freezer Saturday to try to stop her from crying. (Photo: Facebook)

ROY, Wash. -- A 25-year-old man suspected of putting his girlfriend's newborn daughter in a freezer was charged with first-degree assault of a child and other crimes Tuesday in Pierce County Superior Court.

According to the Pierce County Prosecutor's Office, Tyler James Deutsch put his girlfriend's 6-week-old daughter in a freezer because he grew tired of her crying. The baby was allegedly in the freezer for close to an hour and had a core temperature of 84 degrees when it was taken to the hospital.

The newborn is in serious condition at a Tacoma-area hospital.

Pierce County sheriff's deputies received a domestic violence call Saturday afternoon from the 7600 block of 320th Street South. Medics were first on the scene and found a baby only wearing a diaper. The baby's core body temperature was 84 degrees and she suffered blistered skin, a broken arm and leg and a head injury, the prosecutor's office said.

The mother told police she and Deutsch live together in the Roy trailer. She said she left home Saturday afternoon and returned about an hour later to find Deutsch removing the baby from the freezer. She grabbed the baby and immediatly left the home to call 911.

Deutsch allegedly told detectives he was tired of the baby crying so he put her in the freezer and closed the door and then fell asleep until his girlfriend came home.

Police found a bag of cauliflower and a partial bag of ice in the freezer that registered 10 degrees.

Deutsch was charged with assault, criminal mistreatment and first-degree interfering with domestic violence. He is scheduled to be arraigned Tuesday afternoon in Pierce County Superior Court.