A man accused attempted rape of a child used free candy and cash to lure kids at a Lake Stevens store, according to police. Officers arrested the suspect after an undercover sting operation.

LAKE STEVENS, Wash. - A man accused attempted rape of a child used free candy and cash to lure kids at a Lake Stevens store, according to police. Officers arrested the suspect after an undercover sting operation.

Court documents say a mother contacted police on Feb. 3 after her 13-year-old daughter reported that she had been given free candy, drinks, food and condoms from an employee at a convenience store in the 12300 block of N. Lakeshore Drive. The girl had a note from an employee at the store that asked her to return anytime to get more free items and to share her social media accounts with him. 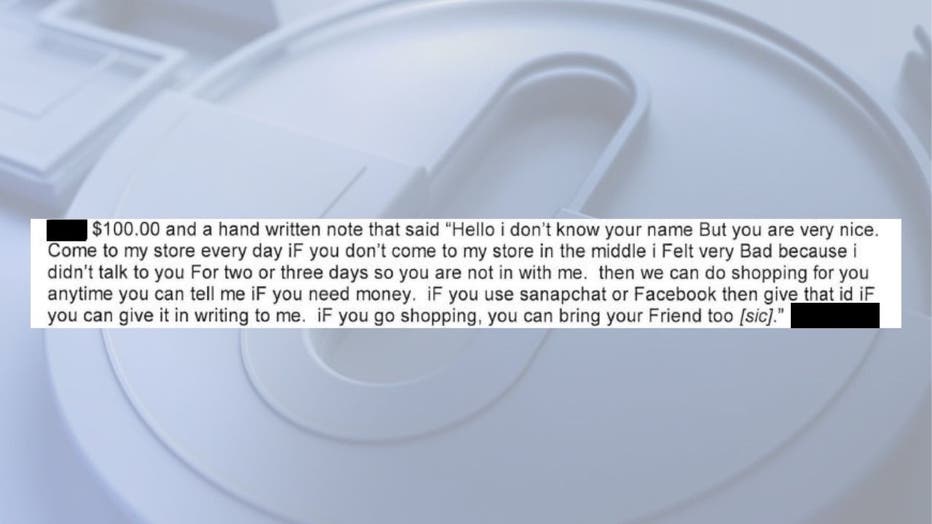 Documents say the girl and her friends returned to the store several times and got more free items from the 30-year-old suspect, including boxes of condoms. On one occasion, the victim said the suspect gave her $100 along with the note and refused to take the money back.

On Feb. 17, Lake Stevens Police got permission from a judge allowing officers to perform an undercover operation. Posing as the victim, a detective left a handwritten note on the suspect's car outside the store stating that she had been grounded and asking him what he meant when he said they "could go shopping."

According to documents, the suspect identified himself as the store employee and unknowingly began texting the undercover detective. The two exchanged text messages discussing sex. At one point, the suspect described wanting to perform a sex act on the girl while having her spend the night at his apartment in Snohomish.

Documents show that the sexual text messaging continued over the course of several days. On March 5, the suspect arrived at a meetup spot where police were waiting. They arrested the suspect and took him to the Lake Stevens Police Department for questioning. Using a translator from Bothell Police, the suspect was read his rights and admitted that "he was in love with her and wanted to marry her when she turned 18. He said he knew she was 12 years old but planned to have sex with her because he was in love with her."

Detectives said in text messages the suspect repeatedly offered the girl money up to $5,000 a month and gifts including clothing, shoes, an iPhone and Oculus VR system.

Police booked the man into jail for investigation of communication with a minor for immoral purposes and 2nd-degree attempted rape of a child.

During the investigation, police also were contacted by an immigration officer who said the suspect had been detained in April of 2021 for attempting to enter the US illegally at the border. He made a claim that allowed him to remain in the country and out of custody during proceedings and is required to check in with the Seattle Immigration Office.

Lake Stevens Police said detectives are searching for possible additional victims. Anyone with information is asked to call their tip line at 425-622-9369 and reference case #2022-2009.