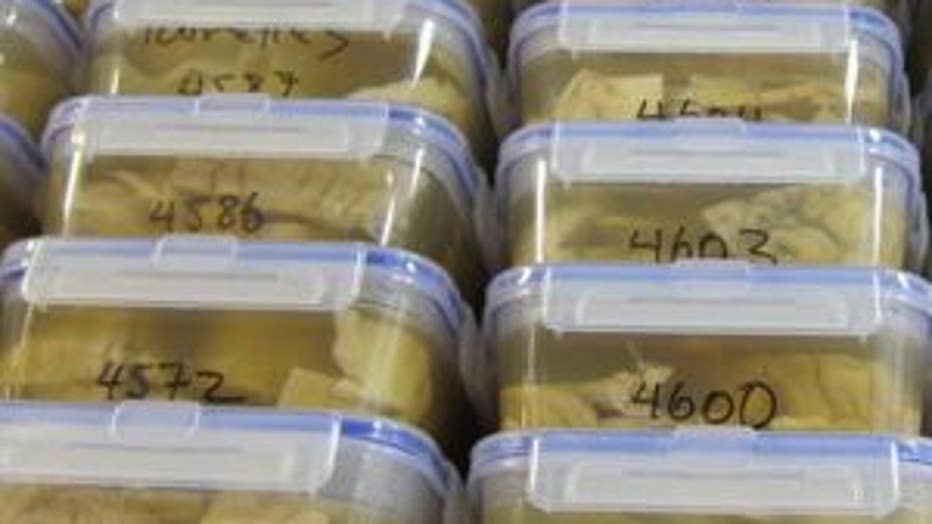 The man, identified as David Charles, allegedly stole more than 60 jars of brain and other human tissues in early October from a warehouse space at the Indiana Medical History Museum, the Marion County Prosecutor's Office said in court papers Thursday. Charles was arrested Dec. 16 on felony theft and other charges.

Charles is to appear an Indianapolis court later this month in connection with the alleged theft of dozens of jars of preserved human brain tissue valued at about $4,800.

Court documents said some jars were sold on the auction site eBay by a middleman, despite a company policy against listing "humans, the human body, or any human body parts or products."

Attempts to reach Charles on Thursday were unsuccessful. He declined to comment when seen outside his Indianapolis home by a reporter with CNN affiliate WXIN.

The alleged scheme began to unravel when the executive director of the museum, Mary Ellen Hennessey Nottage, received a call last month from a man in California who said he had purchased "six jars of brain matter" for $600 on eBay, according to court documents.

The man suspected the jars were stolen when he compared them to others on the museum website. Nottage notified the police.

Nottage said the California man collected oddities. The specimens he bought were stolen from a warehouse space on the museum campus, where thousands of jars of brain and other human tissue from autopsies performed on patients at the now-defunct Central Indiana Hospital for the Insane in the 1890s were stored.

"Apparently that's a trend that's building -- the macabre, the oddities," Nottage said. "The television reality show 'Oddities' illustrates that very well. I think it's indicative of people's collecting interests. It's definitely bizarre. It's infuriating that they do not have respect for the human remains."

In the universe of bizarre items that Internet users sell on eBay -- host to millions of auctions each day -- human organs are forbidden. To buy or sell them is a felony under federal law, and trading in illegal goods is a violation of eBay's rules.

Police determined that the buyer on eBay had received the brains from a middleman who allegedly got them from Charles. Charles was arrested during a sting after allegedly agreeing to sell jars of brains to an undercover officer at a Dairy Queen, police said.

Nancy Scheper-Hughes, a professor of medical anthropology at the University of California-Berkeley, and director of Organs Watch, a program that researches human organ trafficking around the world, said the sale of the organs of deceased people was uncommon compared to a thriving, worldwide trade in illegal organ sales of living people.

That trend has been fueled by the Internet and a global shortage of organs for transplants. "Wherever there's an Internet, people are trying to sell organs," Scheper-Hughes said.

"We have thousands of pieces in the warehouse and we're still checking against our inventory," Hennessey Nottage said.