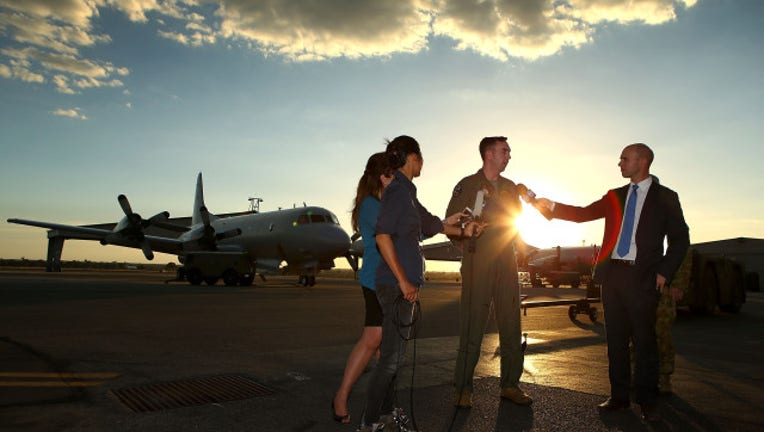 Orion captain Flt Lt Benn Carroll speaks to reporters after returning from a search mission for debris from missing Malaysia Airlines flight MH370 at RAAF Base Pearce on April 8, 2014 in Perth, Australia. ACM Angus Houston advised the towed pinger by

In a sea of uncertainty, two pieces of good news surfaced Wednesday.

Searchers picked up fresh signals that officials hope are locator beacons from the data recorders of the missing Malaysia Airlines Flight 370.

The Australian ship Ocean Shield had first picked up the underwater pulses Saturday. But then, for the next three days, nothing.

On Tuesday, the ship once again reacquired the signals. That's four signals in the same broad area: two on Saturday; two on Tuesday.

"I believe we are searching in the right area but we need to visually identify wreckage before we can confirm with certainty that this is the final resting place of MH370," said Air Chief Marshal Angus Houston, the chief coordinator for the Australian operation.

The second piece of good news? Authorities analyzed the signals picked up Saturday and determined they weren't natural occurrences, but likely came from specific electronic equipment.

"They believe the signals to be consistent with the specification and description of a flight data recorder," Houston said.

"I'm now optimistic," he added, "we'll find the aircraft or what's left of the aircraft in the not too distant future,

Wednesday is Day 33 in the search for Malaysia Airlines Flight 370, which went missing March 8. It was carrying 239 people.

Authorities haven't given up trying. Instead, they are pinning their hopes on the so-pings.

But time is not on their side.

The batteries powering the flight recorders' locator beacons are certified to be working for 30 days. Stored in a plane's tail, they are designed to begin sending off distinct, high-pitched signals as soon as they come in contact with water.

"The signals are getting weaker. Which means we're either moving away from the search area or the pinger batteries are dying," Houston said.

The third signal was picked up Tuesday at 4:27 p.m. That lasted 5 minutes 32 seconds.

"There is still much work to do, however."

There's still no indication of wreckage from the plane. And so the visual search goes on.

Wednesday's effort includes up to 11 military planes, four civilian aircraft as well as 14 ships. Three of them -- the Ocean Shield further north, and the British HMS Echo and Chinese Haixun 01 to the south -- will be focusing underwater.

All told, everyone involved will be scouring a 29,000-square-mile zone centered about 1,400 miles northwest of Perth.

But it still pales in comparison to the once nearly 3 million miles, at sea and on land, the searchers were scouring for signs of the lost aircraft a few weeks ago.

Kevin McEvoy, a New Zealand air force commodore involved in the effort, noted that authorities once "didn't even know which haystack" to look in for the aircraft.

"I think we have got a much clearer picture around the areas that we need to concentrate on," McEvoy told CNN's Erin Burnett from Auckland.

Authorities greatly shrank that area after analyzing satellite data to determine Flight 370 had set off from Kuala Lumpur toward Beijing, turned around to go back over the Malay Peninsula, then ended up in the southern Indian Ocean.

Why? No one really knows.

The best chance to answer that question may rest wherever the plane -- and its so-called black boxes, with their trove of information about the plane and its movements -- now resides.

Search planes dispatched day after day looking for evidence of the missing airliner -- a floating wing, a seat cushion, anything -- thus far have come up empty.

The latest, greatest hopes have come from crews listening underwater for signs of Flight 370.

The ocean to contend with

The first such possible breakthrough came last Friday and Saturday, when a Chinese ship detected pulses that may have been from the plane. No more have been heard since.

According to McEvoy, "the main focus" centers around the site of Ocean Shield's discovery. The ship used more advanced detection gear than that aboard the Chinese vessel and was found some 375 miles away, leading Houston to believe they are separate signals.

Beyond the dwindling battery life, there's all the ocean to contend with: The Ocean Shield signals were in water about 2.6 miles deep, meaning a number of things could literally get in the way of or otherwise disrupt the pulses.

To make sure the waters in the area isn't roiled any further, air and sea traffic there is being limited. That's why there's no rush to put in underwater drones to take photos.

Ocean Shield can search six times the amount of area with a towed pinger locator than can be done with the sonar on a drone, Houston said.

"The better the Ocean Shield can define the area the easier it will be for the Autonomous Underwater Vehicle to subsequently search for aircraft wreckage," he said.

"Bear in mind with the Air France disaster, it took the underwater vehicle 20 days to get to the wreckage."

If more pulses are detected, it's not as if they'll lead down in a straight line to the flight recorders. As is, the pings that were heard could have emanated from anywhere within a 5-mile radius, said Mary Schiavo, a former inspector general for the U.S. Department of Transportation.

Finding more signals could narrow the search area. Without them, authorities could then start the painstaking process of using side-scanning sonar to try to find the aircraft on the ocean's bottom.

The absence of wreckage near these detected signals leaves some skeptical, worried that the Chinese and Australian ship's finds could be yet another false lead in an investigation that's been full of them.

"It's either the most extraordinary event, or those pings weren't real," O'Brien said. "It's somewhat befuddling."

Sarah Bajc, the partner of American passenger Philip Wood, isn't convinced about anything. She told CNN's Erin Burnett she thinks the plane was hijacked.

"All of us pretty well agree that until there's the bulk of the plane, the bulk of the bodies discovered, and a black box intact, we won't believe that it's final evidence," Bajc said early Wednesday from Beijing. "I don't think the authorities have given us much confidence of their investigative skills so far."

The lack of clarity makes it hard to "grieve properly and ... move on" -- something that she's not yet willing to do.

"I want to fight to find him, in whatever form that ends up being," said Bajc, who is coordinating with other passengers' kin to press for answers. "And I think most of the families feel the same way."

Until they get answers, family members like Steve Wang are clinging to hope while trying to hold themselves together. His mother was on the plane.

"We're just going through so many kinds of emotion," said Wang. "Desperate, sad and helpless -- something like that. Everything."