KUALA LUMPUR, Malaysia -- Malaysian Prime Minister Najib Razak said Saturday that missing Malaysian Airlines Flight MH370's communications were "disabled," its transponder was "switched off" and "someone" deliberately diverted the aircraft from its scheduled route to Beijing and instead headed west over the Indian Ocean.

He added that despite media reports that the plane likely was hijacked, "we are investigating all possibilities that caused MH370 to divert" and investigators now are focusing on passengers and crew. 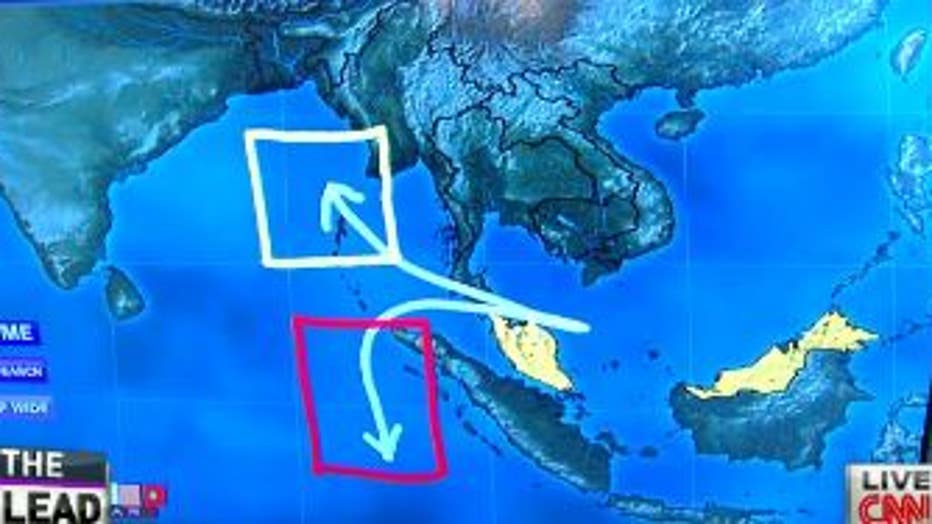 Authorities say that Malaysian Airlines Flight 370 diverted west, over the Indian Ocean, either toward India or south. (Image: CNN)

The prime minister's comments at a news conference came about two hours after the Associated Press said an unidentified Malaysian official told the news agency that investigators had concluded the plane had been hijacked.

"Despite media reports of speculation that the plane was hijacked, I want to be very clear that we are investigating all possibilities that caused MH370 to divert from its" scheduled route, Razak said at the news conference.  However, he said the movements of the aircraft "are consistent with deliberate action by someone on the plane."

"Based on new communication, we can say with a high degree of certainty that the aircraft communications addressing and reporting system … was disabled just before the aircraft reached the east coast of the peninsula of Malaysia," Razak said. "Between Malaysia and Vietnamese air traffic control, the aircraft’s transponder was switched off."

He said investigators were so confident that the plane had turned back and flown west across Malaysia and toward the Indian Ocean that search operations in the South China Sea were being halted and the search was going to focus instead on two corridors in the Indian Ocean -- one that would head north over the ocean toward Kazakhstan and the other to the south.

The search for the missing airliner would now focus on those two corridors, he said.

The question of what happened to the jetliner has turned into one of the biggest mysteries in aviation history, befuddling industry experts and government officials.

The flight took off from Kuala Lumpur last Saturday, heading northeast en route to Beijing.  It vanished about 50 minutes after it took off.  Malaysian authorities feared it had crashed into the Gulf of Thailand, between Malaysia and Vietnam, and concentrated search efforts there. Nothing was found. 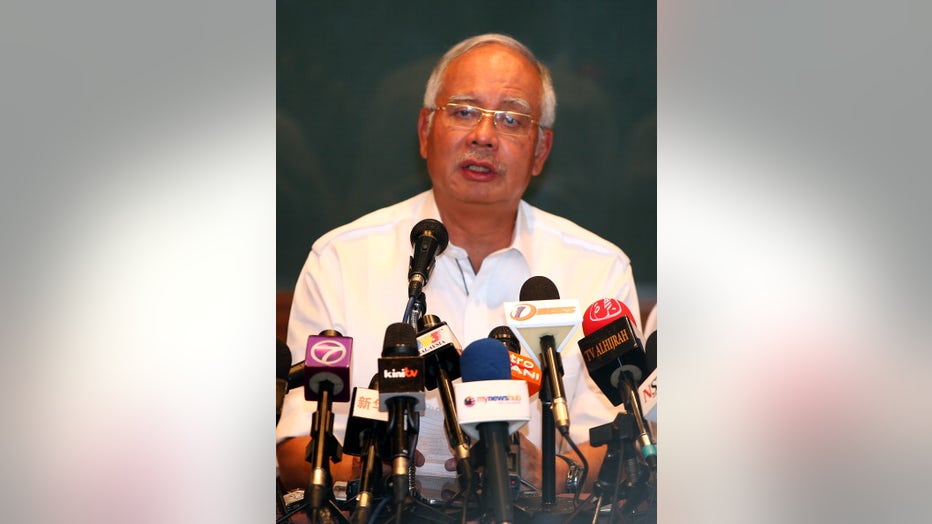 Malaysian Prime Minister Najib Razak speaks to the media at the Kuala Lumpur International Airport on March 8, 2014, hours after Malaysian Airways Flight 370 vanished with 239 people on board. (Photo: How Foo Yeen/Getty Images)

In the first few days after the plane fell off radar screens, investigators were looking at the possibility of a hijacking or sabotage, focusing on two passengers traveling on stolen passports. Those passengers have since been identified as two young Iranian men who authorities have said have no links to terror groups and appeared to be seeking entry to Europe in order to work.

The sabotage theory got a boost Friday from The Wall Street Journal, which reported investigators increasingly suspect the plane's communications systems were manually switched off.

Investigators are trying to determine whether the satellite communications system that pinged for hours stopped functioning because "something catastrophic happened or someone switched off" the system, the newspaper reported, citing an unnamed person familiar with the jet's last known position.

The pings stopped at a point over the Indian Ocean -- far to the west of its scheduled route -- while the jetliner was flying at a normal cruising altitude, according to the newspaper.

Malaysian officials, speaking at a news conference Friday, acknowledged that the shutting off of the transponder could indicate that there had been a hijacking.

Malaysian officials said they would expand their search toward India on the possibility that the airplane had veered in that direction, but that they would also continue to search closer to the original flight path in the South China Sea.

"This is not a formal investigation that becomes narrower with time,” Hishamuddin said. “The new information forces us to look further afield.’’

A senior U.S. official familiar with the investigation told CNN that the Malaysia Airlines plane made several significant altitude changes and altered its course more than once after losing contact with flight towers.

The jetliner was flying "a strange path," the official said on condition of anonymity. The details of the radar readings were first reported by The New York Times on Friday.

Malaysian military radar showed the plane climbing to 45,000 feet soon after disappearing from civilian radar screens and then dropping to 23,000 feet before climbing again, the official said.

The more the United States learns about the flight's pattern, "the more difficult to write off" the idea that some type of human intervention was involved, another U.S. official familiar with the investigation said.

Still, no conclusion has been drawn, said the official, who spoke on condition of anonymity.