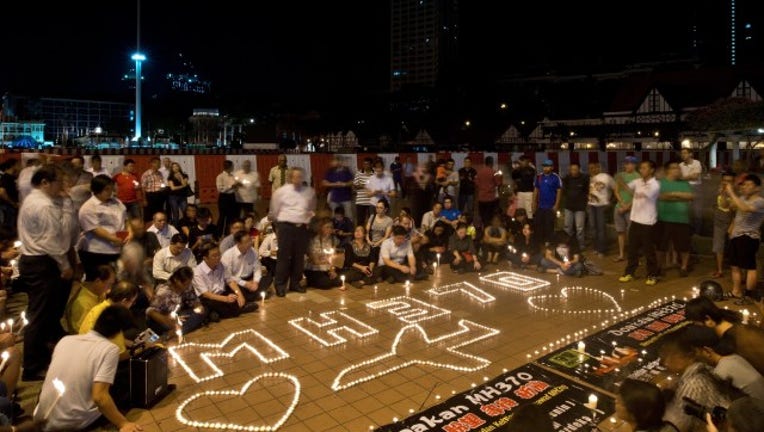 Tuesday is Day 32 since Malaysia Airlines Flight 370 disappeared. One hundred and thirty-three search missions have been carried out so far but they have been fruitless.

Now, hope seems to rest on underwater pulses that an Australian navy ship has detected.

Investigators hope the signals could be locator beacons from the plane's data recorders, but they're not sure yet.

"This is the most positive lead and rest assured, we are pursuing it very vigorously," Australian Defense Minister Sen. David Johnston told reporters Tuesday.

What happens after the Malaysian plane's pingers die?

The signals were detected over the weekend. They have not been heard from since.

But buoyed by the hope that they're closing in, they're scouring the Indian Ocean and trying to hear the pings again.

"We have at least several days of intense actions ahead of us," Johnston said. "We're throwing everything at this difficult, complex task."

It's too soon to say whether the sounds were signals from the missing plane. But authorities appeared optimistic as they described the find on Monday.

"We've got a visual indication on a screen, and we've also got an audible signal. And the audible signal sounds to me just like an emergency locator beacon," said retired Air Chief Marshal Angus Houston, the chief of the Australian agency coordinating the search. "We are encouraged that we are very close to where we need to be."

But he cautioned reporters to "treat this information cautiously and responsibly until such time as we can provide an unequivocal determination.

"We haven't found the aircraft yet," he said. "We need further confirmation."

It could take days before officials determine whether the signals came from the plane, which fell off radar on March 8 on its way from Kuala Lumpur, Malaysia, to Beijing.

Search teams have been scanning vast swaths of the Indian Ocean in the search for the aircraft, with very little data to pinpoint its whereabouts.

Finding pings from the data recorders would be a major step in the investigation, helping searchers narrow the area where they're looking. Authorities reduced the size of the search area on Tuesday, focusing on a smaller area about a third of the size of the previous search zone: 30,000 square miles (77,580 square kilometers) about 1,400 miles (2,270 kilometers) northwest of Perth.

Australian officials are scheduled to give an update on the search's progress at 11 a.m. Tuesday (11 p.m. ET Monday).

For investigators trying to hear the signals, time is running out.

The batteries powering the beacons, which are designed to start sending signals when a plane crashes into water, last about 30 days after the devices are activated.

Monday marks the 31st day in the hunt for the plane. Experts have said it's possible that the batteries could last several days longer if they were at their full strength.

That race against the clock is the "No. 1 challenge" searchers face, U.S. Navy Cmdr. William Marks told CNN on Monday.

The developments over the weekend were encouraging, he said, but it's been almost a day and a half since then.

"This is a 24-hour operation. We haven't quit since we initially heard these signals," he said. "We've been going continuously around the clock and we haven't been able to reacquire them."

Searchers are still scouring the waters, but their optimism is "more cautious" now, he said.

"As hours pass," he said, "our optimism is fading away, ever so slightly."

Next steps in underwater search

Cheers erupted when the team aboard Australia's Ocean Shield first reported a possible signal had been heard, according to Capt. Mark Matthews, the U.S. Navy's salvage supervisor.

The first detection lasted for more than two hours; a second lasted for about 13 minutes.

The signals, detected about 1,750 kilometers (1,100 miles) northwest of Perth, Australia, were consistent with those sent by a flight data recorder and a cockpit voice recorder, Houston said.

Houston said the signals, heard in seawater about 4,500 meters (14,800 feet) deep, are "probably the best information that we have had" so far in the search.

Matthews told CNN's Will Ripley he has cautious, measured optimism about the two signals.

If they are heard again, he said, an underwater drone could be deployed to take photos before officials would know whether Flight 370 has been found. That process could take days, and possibly a week or more.

No one should jump to conclusions before the signal is confirmed to be from the aircraft, Matthews said.

Matthews praised the international team in Kuala Lumpur for what he called a remarkable feat of engineering and mathematics that helped pinpoint the place for the Ocean Shield to begin its search.

The Australian ship is carrying two key pieces of U.S. equipment to help scan the water for signs of the plane: a towed pinger locator and a Bluefin-21 underwater vehicle.

"If we can locate this wreckage and salvage the important components, it's just going to be a phenomenal event," he said. "Because I don't think in the history of aircraft searches, we've ever started with such inexact information to identify where it went in the water."

Teams are also still investigating pulses detected Friday and Saturday by a Chinese ship about 600 kilometers (375 miles) southwest of the area that the Ocean Shield is searching.

The Chinese said the electronic pulses -- detected only 2 kilometers (1.25 miles) apart -- were consistent with those emitted by pingers on an aircraft's "black boxes."

The signals had a frequency that's specially designed for recorders -- a sound that does not occur in nature, officials said.

Houston said sounds travel long distances underwater, making it difficult to find their sources. If detectors were near a pinger, they would pick up the signal for a more sustained period.

The signals detected by the Chinese weren't as sustained as those picked up by the Ocean Shield, and the Chinese vessel's detection gear isn't thought to be as advanced as the U.S. pinger locator.

Could the two vessels have been listening to the same sounds?

Houston said Monday that they were probably separate events, pointing out that the search area where they were detected is over 300 nautical miles long.

One instance "was at one extremity" he said, and "the other at the other extremity."

Investigators have described the search not as finding a needle in a haystack, but rather trying to find the haystack.

Narrowing down the search area Tuesday was a key step, said David Gallo, director of special projects at the Woods Hole Oceanographic Institution.

"They've cut down the size of that haystack incredibly," he said, "into the size of something manageable."

But the search area ships and planes are scouring still presents major challenges.

The ocean water is deep, and a massive cyclone churned through the area just two weeks ago, packing wind speeds of more than 160 mph. At the time, search crews were looking at a different part of the Indian Ocean, but now that the focus of the search area has shifted, the possibility that large waves from the storm made it even harder to find debris is a reality investigators must face, according to CNN meteorologists.

"This was an area that looked like a washing machine in the first place, but now we know it was even worse than that," CNN meteorologist Chad Myers said.

Despite the obstacles searchers face, Malaysian authorities are hopeful there will be a positive development in the next few days, if not hours, acting Transportation Minister Hishammuddin Hussein told reporters Monday.

But some friends and relatives of passengers said they're not putting too much stock in Monday's news. Relatives have repeatedly heard from officials that they thought something had been found, only to have their hopes dashed when those finds have not led to the plane.

"Until they physically locate the bulk of the plane with the black box intact and passenger bodies, I won't believe it," said Sarah Bajc, the partner of American passenger Philip Wood.

At a candlelight vigil in Beijing on Monday, some relatives sobbed and others bowed their heads.

"If the plane is there, it's there. We can't change it," the husband of one passenger said. "But I am still hoping for a miracle to happen."

While searchers may be getting closer to the plane, a fresh mystery has emerged about what happened during the flight.

The jet skirted Indonesian airspace as it went off the grid and veered off course, a senior Malaysian government source told CNN on Sunday.

After reviewing radar track data from neighboring countries, officials concluded that the plane curved north of Indonesia before turning south toward the southern Indian Ocean, the Malaysian source said.

Whoever was flying the plane could have been trying to avoid radar detection, the source said.

Investigators haven't said who they think might have flown the plane off course or why.

The possibility that the plane was hijacked by someone who knew how to fly a commercial jet is still on the table. Authorities have also been investigating the plane's captain and co-pilot. And they haven't ruled out mechanical problems as a possible cause of the plane's diversion.

So far, no physical evidence of the plane's eventual whereabouts has been found.