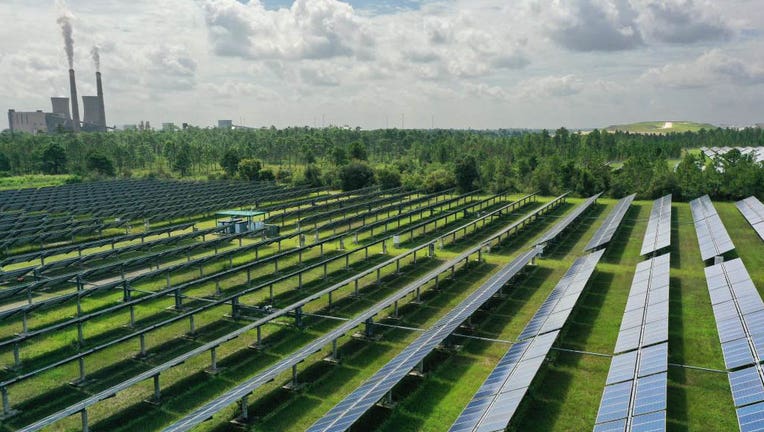 FILE IMAGE - The 6 megawatt Stanton Solar Farm outside of Orlando, Florida is seen in this aerial view from a drone in a file image dated Sept. 9, 2021. (Photo by Paul Hennessy/SOPA Images/LightRocket via Getty Images)

A majority of Americans say the U.S. should prioritize the development of wind, solar and other renewable energy sources, as well as support the federal government taking steps toward becoming carbon neutral by 2050, according to polling by Pew Research Center.

A survey of 10,237 U.S. adults, conducted between Jan. 24 to Jan. 30, 2022, found that 69% of respondents said they prioritize developing alternative energy sources over expanding the production of oil, coal and natural gas. The same share (69%) also said they favor the federal government moving toward carbon neutrality in the decades ahead — which is a key component of President Joe Biden’s climate and energy policy agenda.

Climate neutrality refers to the idea of achieving net-zero greenhouse gas emissions — which warm the planet — by balancing those emissions, so they are equal to or less than the emissions that get removed through Earth’s natural absorption, according to the United Nations.

In December, Biden signed an executive order to bring the government closer to its 2050 goal, aiming for a 65% reduction in greenhouse gas emissions, such as carbon dioxide through burning fossil fuels, by 2030 and an all-electric fleet of cars and trucks five years later.

The latest Pew survey on climate found a smaller share of Americans (31%) believe the U.S. should phase out the use of oil, coal, and natural gas completely. A majority of those surveyed (67%) say the country should use a mix of fossil fuel and renewable energy sources, the researchers said.

Pew noted that the survey was conducted prior to Russia’s invasion of Ukraine on Feb. 24, which has driven increased uncertainty in global energy markets.

Visions for the country’s climate and energy future were divided mostly by political party affiliation, Pew said. Republicans and Republican-leaning independents gave a greater priority to expanding the production of oil, coal and natural gas, compared to developing alternative energy sources. Overwhelmingly, these respondents said they believe that fossil fuels should remain a part of the country’s energy picture, according to the researchers.

A majority of Democrats and Democratic leaners, on the other hand, said they support prioritizing the development of alternative energy sources and favor the U.S. taking steps to become carbon-neutral by 2050.

RELATED: What is net-zero living and why experts say it’s worth it

But the research center found internal differences about energy policy within both political parties. On the GOP side, Pew noted disagreements about the carbon-neutral goal, with 66% of self-described moderate and liberal Republicans favoring taking steps toward this, while 64% of conservative Republicans opposing this.

Democrats also had a similar split. Some 49% of Democrats said they believe the U.S. should phase out the use of oil, coal and natural gas completely, while 50% said there should be a mix of energy sources.

"This overall divide reflects competing views within the Democratic Party: 63% of liberal Democrats say the U.S. should phase out the use of fossil fuels completely, while a majority of moderate and conservative Democrats (61%) say it should use a mix of energy sources," Pew said.

More than two dozen countries, cities and companies joined the Powering Past Coal Alliance, whose members committed to ending coal use by 2030, for developed countries, and no later than 2050 for developing ones. The U.S., Canada, Denmark and several other nations also signed a pledge to "prioritize" funding clean energy over fossil fuel projects abroad.

The Pew survey found broad support for the U.S. participating in international efforts to help reduce the effects of climate change, with 75% favoring and only 24% opposing.

Meanwhile, California wants to slowly phase out new gas-powered cars, aiming to slowly raise the sale of new cars that are electric, hydrogen-powered or plug-in hybrids to 100% by 2035.

About 11% of all new passenger car sales nationally happen in California, giving the state significant influence over the auto market. Californians would still be allowed to drive gas-powered cars and sell used ones.

Elsewhere, Washington Gov. Jay Inslee signed a law last month setting a goal of requiring all new vehicles in the state to be electric by 2030, but regulators have until the end of 2023 to say how the state will get there.

RELATED: How to reduce your carbon footprint: Practical tips for day-to-day life