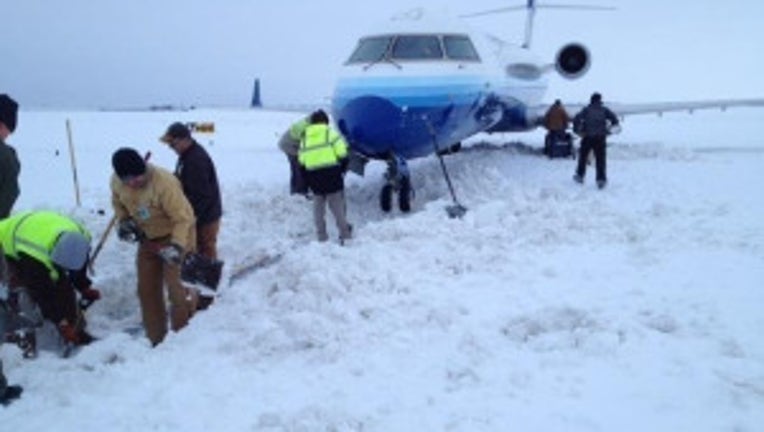 KANSAS CITY (CNN) -- A massive winter storm spanning 20 states dumped more than a foot of snow in some places Thursday and brought life to a standstill in parts of the central United States.

About 60 million people -- 20% of the U.S. population -- were under winter weather warnings, watches and advisories in the 750,000 square miles affected.

Missouri Gov. Jay Nixon declared a state of emergency. Snow, sleet and ice could wreak havoc, and parts of the state could see more than 10 inches of snow.

Kansas City Mayor Sly James also declared a state of emergency. There were 250 snow plows working to clear roads in the city, and residents were urged to limit travel.

Kansas City International Airport shut down because of the weather, according to Joe McBride with the city's aviation department.

The city picked up 7.6 inches of snow, a record daily snowfall, the National Weather Service said.

Authorities in Kansas had closed a 240-mile stretch of Interstate 70 west of Salina earlier in the day. Two dozen soldiers from the Kansas National Guard later searched the interstate and U.S. Highways 54 and 400 farther south for any stranded travelers.

In Wichita, despite crews spreading salt and sand across roads for days, many roads remained slick. Side streets were worse, CNN affiliate KSN reported.

"If you don't have to travel, don't do it," the governor said.

The storm started to wind down Thursday night in Wichita after leaving 14.2 inches of snow over two days -- the second highest storm total in the city's history, according to the National Weather Service.

The University of Kansas closed two of its campuses -- in Lawrence and Overland Park, both near Kansas City -- through Friday because of the weather.

Across the country, flights were canceled or delayed because of weather. St. Louis, Dallas/Fort Worth, Chicago's O'Hare, and Denver had the most cancellations and delays after Kansas City, according to FlightStats, which tracks air travel.

A United Airlines flight from Denver had some snow trouble when it arrived in Wichita, Kan.  Flight 5518 got stuck on the taxiway at Wichita’s Mid-Continent Airport.

The flight was originally scheduled to land in Wichita at 3:19 p.m. Thursday, but it was delayed.

At 4:39 p.m., one of the passengers sent KSN-TV a message that the flight landed but was stuck in the snow. At 5:03, he said workers were trying to clear a path so that a bus could drive to the plane and pick up the passengers. But that didn’t work.

The passengers weren’t able to get off the plane until 6:30 p.m.

(KSN-TV/Wichita contributed to this report)