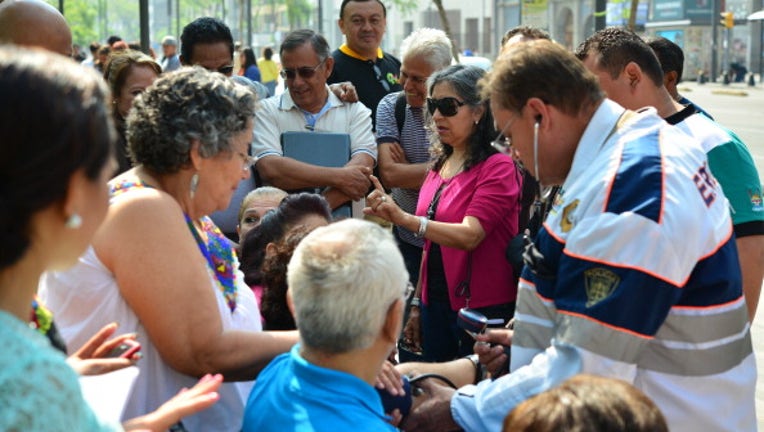 The quake occurred on the Pacific coast between the major resort towns of Acapulco and Zihuatanejo during Holy Week, when Mexicans traditionally flock to the beaches, and resorts typically run at full capacity.

It struck at 9:27 a.m. (10:27 a.m. ET) about 22 miles (36 kilometers) north-northwest of Tecpan, Mexico, according to USGS. The Mexican National Seismological Service measured its magnitude at 7.0.

The quake's depth at the epicenter was a shallow 15 miles (24 kilometers), the USGS said.

Gustavo Lozano was with his family at home in Barra de Potosi, a fishing village nearly a three-hour drive northwest of Tecpan, when the earthquake hit.

"There was no way not to feel it," he told CNN. "It was extremely strong."

Unaware that no tsunami advisory had been issued, he and his family drove to a shelter at the Ixtapa-Zihuatanejo International Airport, where a few dozen other people were gathering, he told CNN.

En route, they noticed a few walls from older buildings had collapsed. But the precautionary measure of taking shelter was not needed. "It seems like the worst has already happened," he said.

A Hertz customer service representative, Jose Claro Cervantes, said a woman who was working at a pharmacy in the airport fainted.

The quake was also felt in Mexico City, 170 miles (273 kilometers) northeast of the epicenter. "I was working in my radio news program ... and we were talking about Gabriel García Marquez's death, when I started to feel how the ground was shaking and the lamps were moving," journalist Sol Rivera said via e-mail.

She urged her listeners to remain calm and to move to a safe space, she said.

Reporters called to inform her that everything was OK, but some nerves were frayed.

At least one building in the city was damaged, but there were no reports of major damage, Mexico City Mayor Miguel Angel Mancera told CNN affiliate FOROtv.

The capital's secretary of civil protection, Fausto Lugo, said electricity was lost in parts of the city and that some people reported being trapped inside elevators, but that there were no reports of injuries.

Acapulco's civil protection office said via Twitter that basic services were operating without reports of damage.