Drivers dodged boulders in the eastern Sierra when a 6.0 magnitude earthquake struck near the California-Nevada border Thursday and then a swarm of aftershocks followed. Rockslides were triggered in Mono County briefly closing miles of U.S. 395.

According to the United States Geological Survey, the first temblor was a magnitude 6.0 and hit south of Lake Tahoe in Alpine County at 3:49 p.m.

It was followed by dozens of aftershocks, at least a half-dozen of which were magnitude 4.0 or greater according to the USGS.

The USGS said the epicenter was near the town of Walker, a community in the eastern Sierra Nevada with just a few hundred households.

People as far away as the San Francisco Bay Area, Fresno, and even Las Vegas reported feeling the quakes.

Miles of U.S. 395, a major Sierra route, were briefly closed by rockslides and authorities say some cars were struck but there weren't any injuries.

Video posted by Brett Durrant on Twitter near Coleville, California along U.S 395 shows billowing dust from rockslides moments after the quake.

There were reports of rockslides along State Route 89 in Mono County, east of Sierra Nevada.

Caltrans crews were dispatched to the area to remove fallen rocks from the road. It was the largest quake to hit the area since a magnitude 6.1 temblor in 1994. 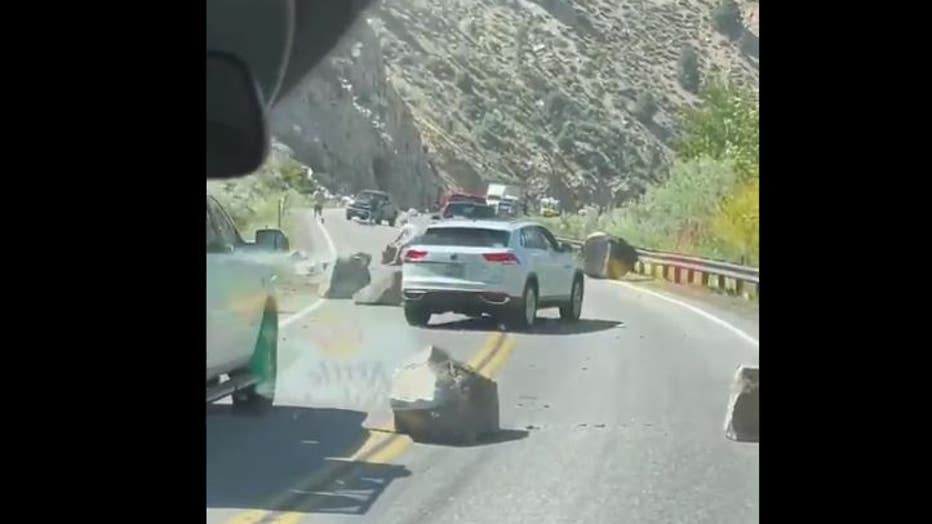 Officials with the California Office of Emergency Services said they felt the quake in their Sacramento area offices when it happened.

"We actually felt the earthquake here in our office in Sacramento. We saw some of the light fixtures swaying," said Brian Ferguson, Deputy Director of Crisis Communications at CAL-OES.

The state's Office of Emergency Services says there were no immediate reports of large damage.

"We have a team of folks who are actively working to do those assessments, check on the roads, check on the infrastructure, any sites of note whether it be sewage treatment, a jail, hospital that could be impacted," said Ferguson.

The earthquake swarm happened on the Antelope Valley fault.

"This is just one of the more unusual locations where we see earthquakes from time to time," said Prof. Richard Allen, director of the UC Berkeley Seismological Laboratory.

Allen said this is an area being moved by shifting plates to the west along the more famous Hayward and San Andreas faults.

"That motion is actually moving further and further east into this eastern California shear zone. And so this is part of a long term tectonic process that happens over millions and millions of years.

Sarah Minson with the United States Geological Survey spoke with KTVU by phone to break down a series of quakes that struck between Nevada and California.

Initially, the USGS reported that a magnitude 4.8 earthquake stuck Farmington, California two minutes after the 6.0 shaker, but the agency pulled the reading after further review.

Sarah Minson with USGS explained to KTVU that it uses an automated system to detect earthquakes. The information is then immediately reviewed by someone to determine whether the automated algorithm is correct or if adjustments need to be made.

"It's rare, but from time to time earthquakes may be detected automatically that are not real earthquakes when you actually have a human go in and take a look at the data," Minson said.

California's MyShake app alert, an early earthquake warning system for mobile devices, was launched in 2019. Officials said the system was working and that alerts did go out.

Prof. Allen said aftershocks could continue over the next few days or weeks and could even be larger than the 6.0 felt near Antelope Valley.

It's an important reminder to have an earthquake preparedness plan ready.

KTVU's Jana Katsuyama and Associated Press contributed to this report.