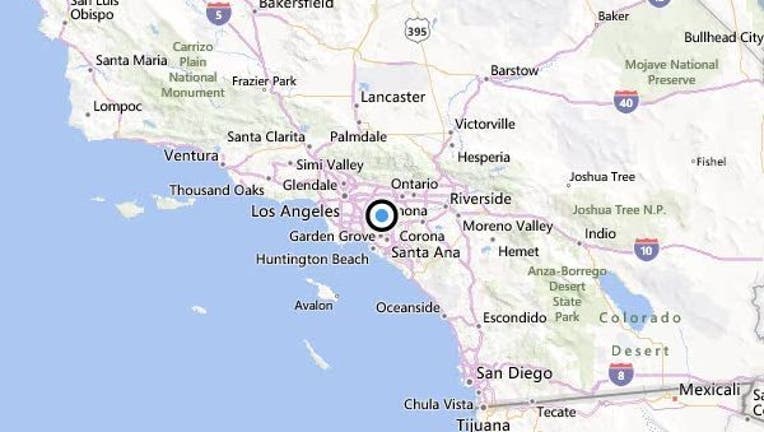 A map showing the location of the epicenter of Friday evening's quake near La Habra, California. (Bing Maps / March 28, 2014)

LOS ANGELES -- A magnitude 5.1 earthquake was reported Friday night one mile from La Habra, Calif., according to the U.S. Geological Survey. The temblor occurred at 9:09 p.m. Pacific time at a depth of 0.6 miles.

Pasadena officials reported no damage so far. Closer to the epicenter, there have been reports of fallen items in homes and broken glass. Still no immediate reports of injuries.

Mayor Eric Garcetti said LAPD and LAFD checks have found no damage so far in Los Angeles. He said the quake is a reminder to be prepared.
Updated at 10:08 p.m.
There have been about 20 aftershocks from the 5.1 quake as well as several foreshocks.
Updated at 10 p.m.
Brea police said a rock slide took place in Carbon Canyon and that Carbon Canyon Road in closed.

Friday night’s 5.1 earthquake hit only about 2 to 3 miles beneath the surface, which means the shaking is very concentrated in a small area, officials said.
Updated at 9:48 p.m.

So far, there have been reports of only moderate damage from the quake. Residents in La Habra, near the epicenter, have sent out pictures on social media showing broken vases, topped furniture and items scattered around their homes. No structural damage has been reported so far.

Disneyland has closed some rides, according to guests. Some said they were stuck on rides.

The Los Angeles Fire Department said there have been no reports of significant damage in Los Angeles. Power was out in some neighborhoods near the epicenter. There are no reported injures.

The 5.1 magnitude earthquake that rattled Southern California Friday night raises the possibility that a larger quake is on the way, seismologists said. (It was originally listed as 5.3 magnitude).

U.S. Geological Survey seismologist Lucy Jones said the 5.1 quake has a 5% chance of being a foreshock of an even larger quake.

In Orange, a few miles to the east of the epicenter, patrons at BJs Brewery went from boisterous conversation to tense silence. The suspended LED lights swayed. When it was over, the room erupted in applause.

Residents in Orange County reported the quake lasted for about 10 seconds. They said they felt gradual shaking.

The quake was felt across a large swath of Southern California. The Los Angeles Fire Department said it is going into emergency mode and looking for signs of damage or injuries.