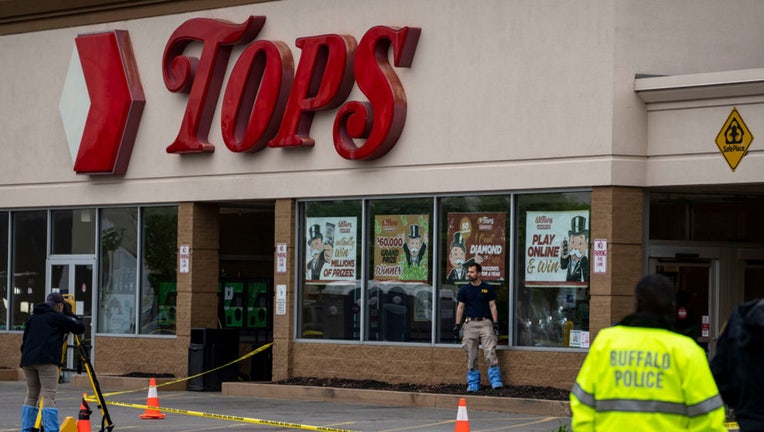 FILE - Bullet holes are seen in the window of Tops Friendly Market at Jefferson Avenue and Riley Street, as federal investigators work the scene of a mass shooting on Monday, May 16, 2022 in Buffalo, NY.  (Kent Nishimura / Los Angeles Times via Getty Images)

LYNNWOOD, Wash. - A Lynnwood man has pleaded guilty to hate crimes that stemmed from him calling several stores across the country, making racially-motivated threats.

In a plea deal, 37-year-old Joey George admitted to making threatening phone calls from his home in Lynnwood to grocery stores in Buffalo, restaurants in California and Connecticut, and a marijuana dispensary in Maryland.

In those calls, George told the staff at the store to "take him seriously" and ordered the store to clear out the customers as he was "nearby" and "preparing to shoot all Black customers." One grocery store closed down.

In addition to the calls to Buffalo, George admits that in May 2022, he called a restaurant in San Bruno, California. In that call, he allegedly threatened to shoot Black and Hispanic patrons in the restaurant. He told law enforcement that he "made the threat to strike fear in the Bay Area Black community," according to federal prosecutors.

On September 11, 2021, George called a cannabis dispensary in Rockville, Maryland, and used racial slurs as he threatened to shoot and kill Black people at the business. The dispensary shut down and hired extra security, causing a loss of over $50,000. On that same day, George also called a Denny’s restaurant in Enfield, Connecticut and threatened Black patrons at the restaurant, according to federal prosecutors.

As a part of his plea agreement, George agreed to pay restitution to the impacted businesses. The amount he must pay is unclear.

Sentencing is set for Dec. 16.