The symbolic feeding was also a message to government leaders that more needs to be done to save them from extinction. There are only 75 southern residents left.

Sacred traditional ceremonies are very private, but this time, Lummi Nation invited a select group of journalists to bear witness.

It was 7 a.m. when we met at Squalicum Harbor in Bellingham. It was a gray, blustery day as winds blew through yacht lines and seagulls squawked.

Lummi elders loaded a Lummi law enforcement boat and took off through the harbor and out to the Salish Sea. Us journalists, along with a few tribal members, followed on King County's research vessel, the SoundGuardian.

"I just want to thank each and every one of you for being here," Lummi council member Lawrence Solomon said to us before leading the morning with the Lummi national anthem.

The song speaks about a great flood and the Lummi people who survived it. It's a song of strength.

The Lummis are from the northernmost part of Washington state. As Coast Salish people, they have lived on the land and sea long before any other humans arrived.

The Salish Sea is their home and they call the southern resident orcas their relatives -- in Lummi, qwe 'lhol mechen, which means our relatives under the water.

"They take care of us and we take care of them, and the customs and rituals that we have tie us together," said Al Scott Johnnie from the Lummi Cultural Department.

On this day, we get to witness those ties. As we pulled up to a cove near Henry Island, the elders signal for us to turn off the cameras. During the sacred ceremony, we are not allowed to record or take notes. We are only allowed to watch with our own eyes from a distance.

The Lummis all join together on the law enforcement boat and sail off to the beach while us journalists hover in the water on the SoundGuardian. As the ceremony starts, we can see and hear them around the fire. Using spirit boards, they move around each other. Over the rumble of our own boat motor, we can hear them sing.

The ceremony lasts long enough for the tide to fall, beaching their boat. Lost in the ceremony, no one noticed. When the ritual is over, we hitch them up to the SoundGuardian and pull them back into the water. They joke that it's not the first time it's happened.

Then, it was time to release a fish -- one single Chinook salmon -- a symbolic offering to the starving southern resident orcas. The salmon stayed still in Chairman Jay Julius' hands as hereditary Chief Bill James blessed it and Julius released it into the water.

I reflected on all I had seen as we took off on our boats and headed to English Camp on San Juan Island. I don't speak Lummi and we don't communicate in the same way, but on land, the elders explained the urgency they felt in sharing their story and why they invited us. 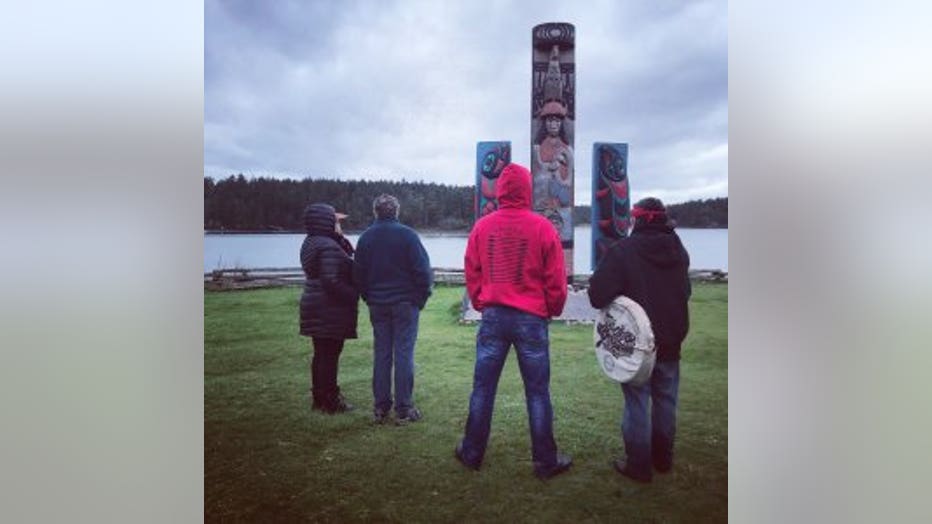 After a sacred ceremony for resident orcas, members of Lummi Nation reflect in front of totem poles at English Camp on San Juan Island.

They explained that while the tribes have their own ways of communicating with each other, they know the broader world absorbs information differently. They needed other storytellers to help spread their message.

"What happens to the Salish Sea inevitably will happen to us," Julius said. "We’re running out of time. I know we’ve got efforts from the state; from the governor; from committees; task force; but the message needs to get out."

The message is that the southern residents need more salmon to survive.

Julius said the ritual that day is the Lummis' version of a southern resident orca task force, a comparison to the governor's own task force, where Julius also gives input. But he tells me he doesn't feel the task force, the state and federal government are doing enough to bring the necessary salmon to the orcas.

As Coast Salish people, they all used to live in balance in a time when more salmon and orcas swam the waters. The Lummis remember when the southern resident orcas swam 200 strong, instead of the 75 that remain today.

"We remember vividly what yesterday was and what precontact was," Julius said. "It’s important to live in this new world but at the same time, protect what once was. Because if we don’t, then shame on us. Shame on all of us."