PHILADELPHIA (WPIX11) – Whether its socks or a pair of underwear, many people hold on to their own superstitions of luck. But for Bienvenido Renoso, it was his lucky belt buckle that saved his life.

The Philadelphia grocery store worker found himself in the middle of a shoot out the broke out right outside the 8th Brothers Supermarket where he works. 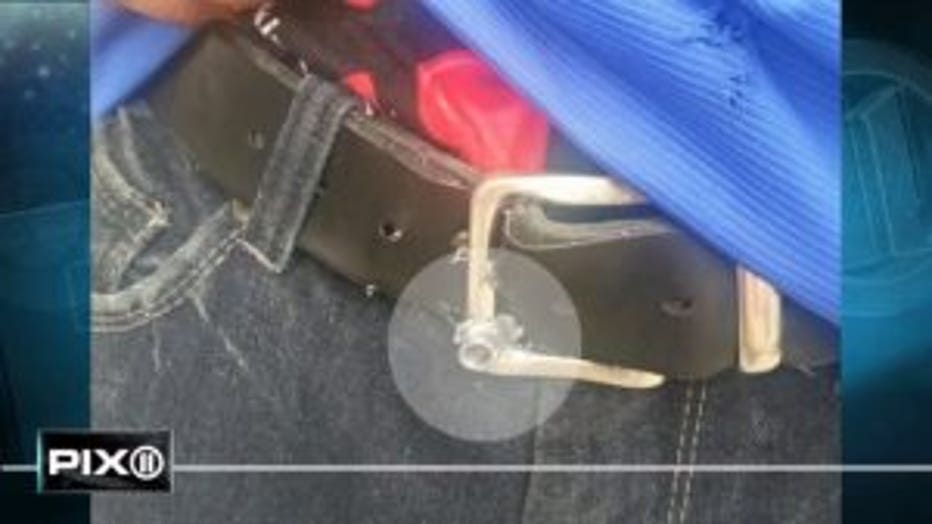 Closer look at the bullet that got lodged in Bienvenido Renoso’s belt buckle that ultimately saved his life. (WPHL)

When gunfire erupted, the 38-year-old hit the floor. As the video shows, a pound cake above his head falls to the ground after getting struck by a bullet.

As the hail of bullets tapers off, Renoso takes a moment to assess the damage – to see if he was struck. Luckily he managed to dodge death.

It was later when someone pointed out a hole in his shirt, which then uncovered a bigger surprise – a bullet lodged into his metal belt buckle that prevented what would have most likely been a deadly outcome.

Unfortunately, one person who was not identified was wounded in the shooting.

No arrests have made; police are still investigating.