ICE HARBOR DAM, S.E. Wash. -- Without enough chinook salmon to sustain them, southern resident killer whales are starving in the Salish Sea. Some believe the answer lies 300 miles away. "Free the Snake" is their rallying cry.

"Breach the dams, it’s not difficult," Sharon Grace said after demonstrating outside the governor's orca task force meeting in Anacortes.

Grace is with the Southern Resident Killer Whale Chinook Salmon Initiative, a group that has collected more than 500,000 petition signatures in support of breaching four dams along the lower Snake River in eastern Washington.

The four dams stretch along the Snake River between Pasco and Pullman. In them, orca champions see the death of crucial salmon habitat.

"Damming those rivers up and preventing access to their spawning grounds was the coup de grace for chinook salmon," said Ken Balcomb, the founder of Center for Whale Research who has studied the southern resident population for 42 years. 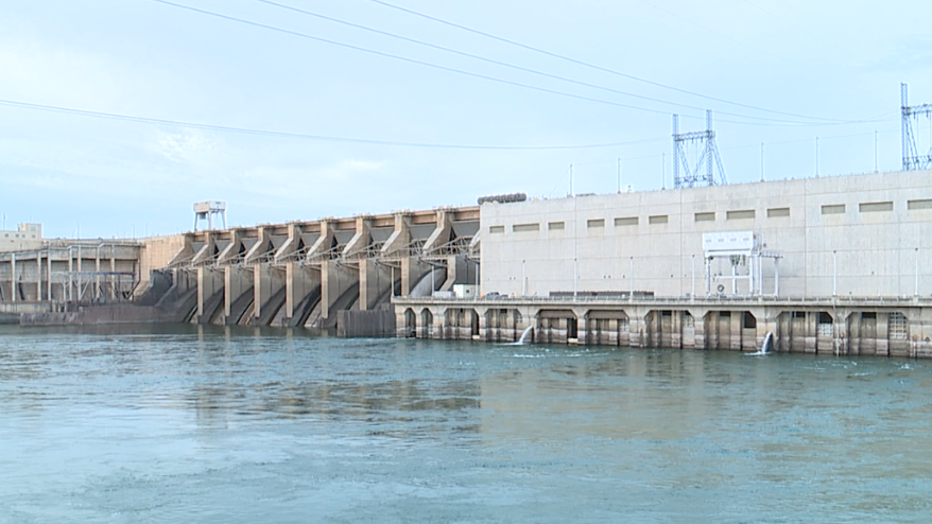 In contrast, without the dams, those in eastern Washington see their way of life wash away.

"It would devastate it," said Randall Ward, a grain merchandiser at Tri-Cities Grain. "I mean, it would basically end my livelihood."

Despite Ward's claim, grain merchandisers below Ice Harbor Lock and Dam would likely not be negatively impacted by a breach. However, those above the dam might have to change their business if the Snake River becomes too shallow for barging.

The Columbia Snake River System is a 465-mile river highway that makes Lewiston, Idaho, a seaport.

In 2014, nearly 10 percent of all U.S. wheat exports moved on barges through the Snake River dams.

"We feed the world in the Pacific Northwest and I think it’s really important for those farmers to keep the dams and keep their river highway," said Nicole Berg. Berg is a fourth-generation farmer in Paterson, Washington. Her farm uses Tri-Cities Grain's facilities along the Snake River to load wheat onto barges.

The dams also churn out about 5 percent of the power needed in the Pacific Northwest. The surplus hydropower is sold out of the region to states like California.

Bonneville Power Administration markets that energy. It's a federal agency that's currently strapped because of new renewable energy sources and a boom in natural gas, which keep prices low and competition for customers high.

"There is no comparable source of firm reliable power available that delivers the same value at anywhere near the cost of the federal Columbia River hydroelectricity system," BPA Deputy Administrator Dan James testified at a recent field congressional committee hearing in Pasco, Washington.

But the system he speaks of is also home to 13 species of salmon and steelhead listed under the Endangered Species Act, a federal mandate to protect and recover.

The four dams on the lower Snake River have been in the crosshairs of salmon advocates for years.

"I think that removing the four lower Snake River dams is the most beneficial thing we can do to protect salmon from extinction," said Joseph Bogaard, executive director of Save Our Wild Salmon.

The plight of the orcas -- three dead in the past four months -- have invigorated the cause.

This summer, NOAA Fisheries ranked the most important chinook stocks for the critically endangered orca. Five of the top 10 come from the Columbia and Snake rivers, the same rivers that serve as the largest provider for power in the Pacific Northwest.

"There is a balance, dams and fish can coexist," said Rep. Cathy McMorris Rodgers, R-Wash.

The dams have proved detrimental to fish passage and over the years, the federal government has poured in billions of dollars to improve it.

At Ice Harbor Dam, operation project manager Tim Roberts points out the results, including a fish ladder, which is a roughly 24-hour climb for adult fish heading upstream to spawn, and a bypass system to cut off juvenile fish headed straight for the turbines.

New turbines are currently being installed for the fish that do slip through. Roberts said these new turbines will benefit the fish. Ice Harbor Dam is replacing three of its six turbines to the tune of around $100 million.

"It’s distributing the pressure across the entire blade so there’s not pockets of high pressure and low pressure the fish would be subjected to," Roberts explained.

"Is the Ice Harbor Dam doing enough to preserve the endangered fish that are in this system?" Q13 correspondent Simone Del Rosario asked.

"Yeah you bet," he answered. "Over the last 20 years that I’ve worked for the Corps, we’ve continued to make improvements throughout those 20 years."

But is it enough?

I analyzed the most recent data from the Army Corps of Engineers on juvenile chinook survival through each of the four lower Snake River dams.

Only taking into account the danger of passing each dam, my analysis showed 29 percent of subyearling chinook will die before reaching the Columbia River.

"The other mortality that’s just as significant, maybe more, is the reservoir mortality due to predation temperature and gas," said Jim Waddell, a retired civil engineer who worked for the Army Corps when they considered breaching the dams nearly 20 years ago.

He claims the ability to breach that soon is possible under the 2002 Environmental Impact Study that listed dam breaching as an alternative.

The Corps objects to that claim, saying only Congress can authorize changes in its operations.

It’s a fight that will most likely drag out in court. A federal judge ordered the dam managers to look at the environmental impacts of these structures and again consider the benefits of breaching. It’s a study that is currently estimated to cost around $81 million. The final report is due in 2021.

It's a delayed decision that dam-breaching advocates believe will come too late to save the orca.

"We’ve got maybe, at most, five more years of reproductive life in this population to and if we don’t do it in that five years, it ain’t gonna happen," Balcomb said.

"I think there’s way more benefit than there is deficit from having the dams in place and I think the investments we have made in mitigating for the presence of the dams have been very successful," Newhouse said.

This marks the beginning of our coverage on what is widely believed to be the most controversial recommendation the governor's task force could make. In the next few weeks, Q13's Simone Del Rosario will look at the local economic impact of breaching, the regional impact on power with and without the dams and the federal fight that has already started. Tell the task force your thoughts on potential recommendations, like dam breaching, here.

**Updated: October 10, 2018**
After this article was published, a representative from Tri-Cities Grain told Q13 News that they would still be able to barge the river if the dams were breached.