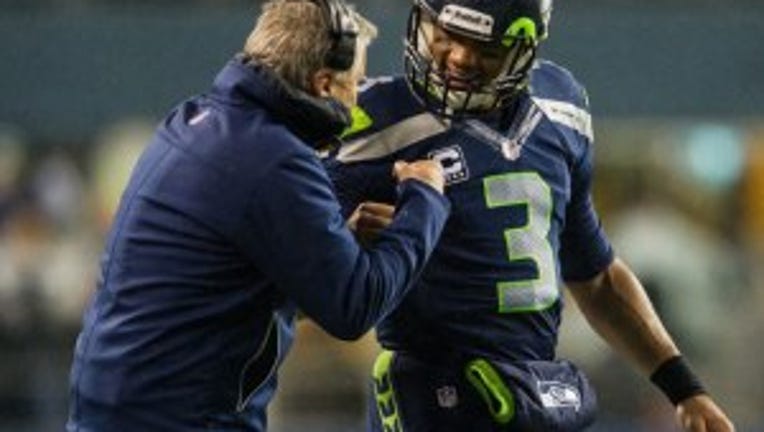 SEATTLE -- All the pundits were saying it minutes after the game ended:

What a statement game from Seattle.

The Seahawks manhandled Drew Brees and the New Orleans Saints 34-7 on Monday Night Football at CenturyLink Field. The Seahawks victory secured the team a spot in the playoffs, and led the Hawks one step closer to guaranteeing home field advantage throughout the playoffs.

The tone of the game was set early by stiff defensive play. Seahawks defensive end Chris Avril stripped a scrambling Brees with six minutes left in the first quarter, and the ball was snagged by Michael Bennett, who returned it 22 yards for a touchdown to put the Hawks up 10-0 early. From there the defense continued throughout the night, holding Brees to his season-low 142 yards passing and the struggling New Orleans offense to -1 yards rushing.

And after two weeks of hand-wringing Seahawks faithful, the Hawks' passing defense looked as strong as ever. With two corners, Brandon Browner and Walter Thurmond facing suspensions for violating the leagues substance abuse policy, backup corners Byron Maxwell and Jeremey Lane held their own and were a huge factor in Brees' low numbers,  Seahawks coach Pete Carroll said.

"We just did what we've been doing," said Carroll. "We came off great off the bye week."

"We made a great quarterback look normal," Sherman said after the game.

As proficient as the Seahawks' defense looked, Russell Wilson and his receivers would not be outdone on the big stage on Monday night. Wilson went 22-for-30 with 310 yards passing and three touchdowns. He divided his time equally, with TE Zach Miller, WR Dough Baldwin and WR Golden Tates all with four or more catches. Wilson again showed his footwork and poise on a national stage, running and ducking Saints defenders as he needed and only allowing one sack.

Along with the victory, Seahawks fans and CenturyLink Field again secured the title of the loudest stadium in the league, registering a decibel reading of 137.6. The Seattle Times said the noise from the Hawks' defensive touchdown even produced a small earthquake, with the Richter scale hitting a magnitude 1.2.

Work is not done for the Hawks, who look to come one step closer to securing home field advantage throughout the playoffs when they face the 8-4 49ers Sunday in San Francisco. With a win there, the Seahawks will win the NFC West division title. The game will be broadcast at 1:25 p.m. on Q13 FOX.

Live Updates from the Game

-- Seahawks get a first down on fourth down. Take it into Saints territory. We're seeing guards in the fullback position. Not a bad way to end the game.

-- Turbin runs to the left, and is taking most of the shots. Such is the game of running out the clock.

-- Michael Bennett gets a ton of pressure on Breese, and the New Orleans Saints give the ball over on fourth down. They are down 34-7 with a little more than eight minutes left in the game.

-- No word on Irvin, but TE Kellen Davis is being evaluated for a possible concussion.

Fourth Quarter-- KJ Wright is great on pass defense. And he's a linebacker.

-- A pitch to Lynch is considered a forward pass. It was a good move by Wilson, but it didn't quite work.

-- The Seahawks force another punt from Drew Brees and the New Orleans Saints. Some of these pass interference calls are getting egregious, though. As a coworker said, "you might as well just put flags on the quarterbacks for the defenders to grab."

-- Ricardo Lockette with a catch to bring the Hawks down to 25. The Hawks have a short yardage on third down. Wilson has to get rid of it quickly, and there's a penalty. The Hawks seemed to have got away with one there...

-- The Saints have to punt on their first possession of the second half and Golden Tate has a bit of a return to bring the Hawks out to their own 21.

-- The crowd noise is ramping up again. It's great to see how surprised the announcers are each time the Hawks' fans ramp it up. We certainly get some "corner of the country" bias.

-- Scratch that. The Saints have never come back down 20 points at the half. If anyone could do it, it's Brees though. He's got a rocket for an arm.

-- The Seahawks have to punt on their first possession. The Saints have come back from a 21-point deficit once before on Monday Night Football.

Seahawks lead New Orleans 27-7 at the half

-- Seahawks get another touchdown with 13 seconds left to go in the first half. Seahawks go up 27-7.

-- The fans registered a magnitude 1.2 earthquake during the Seahawks fumble return.

-- Russell Wilson looks to pass when he scrambles. But he's not afraid to run. Gets 15 to put the Hawks close to a touchdown.

-- Wilson and the Hawks have 2nd and 10 at their own 44, and a Lynch run pushes them toward field goal range. No matter how this quarter ends, it's clear that the off weak had little affect on the Hawks.

-- The Hawks are backed up deep in their own field position. Drew Brees is looking to get one more shot before the end of the half. Would love to go into halftime with solid momentum.

-- "Why do they have seats here. Nobody ever sits." Mike Tirico on CenturyLink Stadium. The New Orleans Saints go 3-and-out with 2:14 left in the first half.

-- Seahawks have to settle for a field goal after taking the ball a long ways down the field. Hope that doesn't come back to haunt them... Hawks go up 20-7 with 3:41 left to go in the 2nd Quarter.

-- Wilson has a 17 yard pass to Golden Tate for the first down. There was a bit of a blown false start call in the play before, but the Sehawks make up for it anyway.

-- Saints bring the all out blitz and the Hawks make him pay. Doug Baldwin with the 52-yard pass from Wilson. In other news the Seahawks broke the sound record for the second time.

-- Brees hits Jimmy Graham for a 2 yard touchdown. The Saints cut the Hawks' lead to 10 with 8:45 left to go in the first half.

-- Drew Brees goes up the middle to G. Graham for a long gain. A flag is down, and Russell Sherman is dinged with a 25-yard penalty.

2nd Quarter -- The Saints are starting to drive for the first time this game.  They're on the Hawks' 27 yard line. And the Saints get a delay of game.

-- The Saints get their first first down with 15 seconds left to go in the first quarter. #CenturyLinkVisitorProblems

-- Seahawks complete on third and goal for a touchdown on a three yard pass to Zach Miller. Seahawks go up 17-0 with 1:55 left to go in the first quarter.

-- Seahawks take over the ball after a 10 yard penalty. No first down for the Saints on their first three drives, and only have nine yards.

-- Bruce Irvin puts a huge hit on a Saints Wide Reciever to force the Saints to 3rd and 9. And the Saints have to punt...

-- Who would want to come in to CenturyLink and compete against this noise? Hawks are up 10-0 early on in the first quarter.

-- Touchdown Seahawks! Chris Avril strips Drew Brees and Michael Bennett intercepts the ball to take it to the house. Seahawks go up 10-0 with 6:27 left in the first quarter.

-- Brees takes over on the 20. The Saints' last drive went three yards and ended in a punt.

-- Lynch can't get a first on third and long. Seahawks have to settle for a field goal to go up 3-0 with 7:47 left in the first quarter.

-- Wilson gets the first down on a three yard scramble. 1st and 10 from the 13. Seahawks opening drive is going well, with a mix of pass and run.

-- Seahawks are driving. Wilson gets to the NO 35 on a 10 yard rush from the option. Great open field pass to start the game. Golden Tate brings the Seahawks to the Saints 23.

-- Brees goes long and Sherman breaks it up. The Seahawks get the ball on their own 30. Nice way to start off for the Hawks defense, on a three-and-out.

-- Boom. A loss of three yards right off the bat. The announcers are saying it's going to get cold, and the Saints will have trouble dealing with the cold.

-- Kickoff! The Seahawks win the coin toss and choose to defer. Drew Brees starts at the 20. Fred Couples raised the 12th man flag.