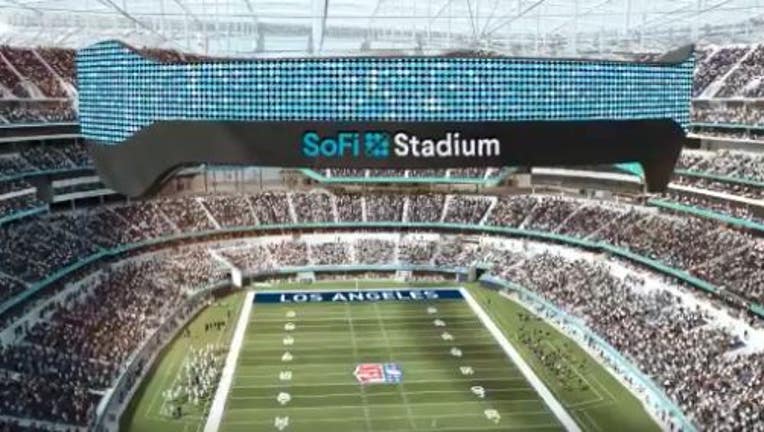 INGLEWOOD, Calif. - The Los Angeles Rams and Los Angeles Chargers will play home games at the brand new SoFi Stadium in Inglewood for the 2020 NFL season, but without fans in attendance until further notice.

No fans inside SoFi for start of NFL season

Both teams announced Tuesday they came to the conclusion after "careful consideration," and under the guidance of local and state health officials.

However, fans still have the option to fill stadium seats with cardboard cutouts of themselves.

RELATED: Rams fans can help fill SoFi Stadium seats with cutouts of themselves

Across the nation in Miami, the Dolphins will allow up to 13,000 fans at their home opener against the Buffalo Bills.

RELATED: Miami Dolphins to allow up to 13,000 fans at home opener

The stadium will open Sept. 13, when the Rams host the Dallas Cowboys in a nationally televised Sunday night game.

The Chargers will play their first game at SoFi Stadium on Sunday, Sept. 20 against the Super Bowl-champion Kansas City Chiefs.

"While not being able to open SoFi Stadium with fans in attendance is heartbreaking, we are grateful for the opportunity to play NFL football this fall," Chargers owner Dean Spanos said.

"We thought maybe it’d be five or six games where there wouldn’t be fans but the reality is this: the trends in California…the numbers are dropping, the numbers in the county are dropping so we have great hope that by the fifth or sixth game that we’re going to have fans here and that it’ll be everything that everybody wanted," Inglewood Mayor James T. Butts Jr. said on Good Day LA on Wednesday morning.

Before the global coronavirus pandemic struck, Taylor Swift was scheduled to open the stadium in July.

Swift not only canceled her tour but she also canceled all of her appearances for the rest of the year, citing coronavirus concerns.

RELATED: Taylor Swift cancels all upcoming appearances and performances for 2020 due to coronavirus concerns

The teams issued a joint statement:

"While we are doing everything to safely open SoFi Stadium and ultimately fulfill its promise to Rams fans, the NFL and to this region, we know our ability to welcome fans into the building will be guided by the wisdom of health care experts and the policies of local, state and federal government officials. Therefore, we won’t speculate on any timeline as to when fans will be able to join us.

The health and well-being of our employees, community and the nation, remains our highest concern. “Millions across California and the country are on the front lines fighting COVID-19, caring for our neighbors and protecting our communities. We applaud their selfless and tireless heroism and thank them for their many sacrifices."

No fans at SOFI Stadium

• Get an inside look at the new SoFi Stadium, future home of the Rams and Chargers

• Construction continues at SoFi Stadium, though altered by pandemic