NEW YORK (CNN) -- Sunday's graduation ceremony at Hofstra University was a bittersweet affair marked by a moment of silence for a 21-year-old student killed by a police officer two days ago. 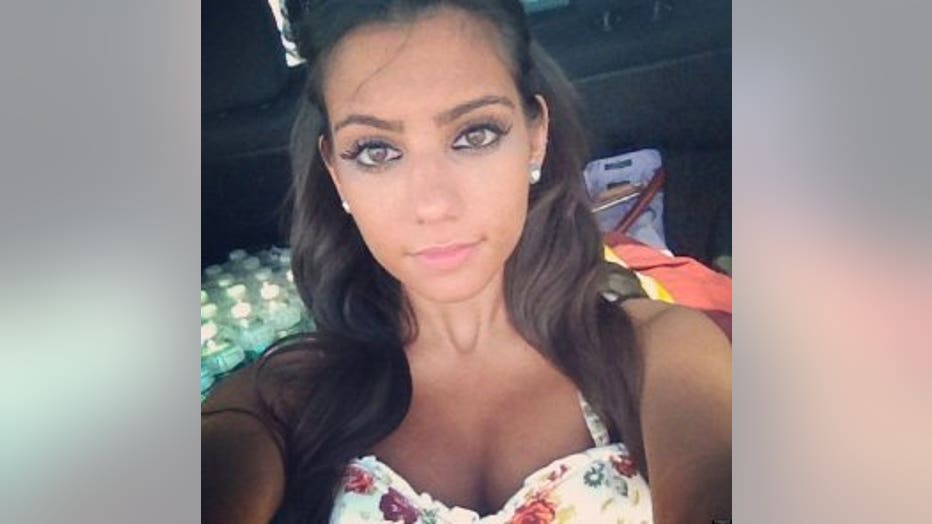 Many students at the university in East Garden City, New York, wore white ribbons on their gowns in tribute to Andrea Rebello, CNN affliate WCBS reported.

"I want to express our community's collective grief and our sorrow over the senseless and tragic death of a very young member of the Hofstra family," university President Stuart Rabinowitz said. "Our hearts and our thoughts and our prayers are with Andrea's family, and with her friends and classmates, many of whom are in this room this afternoon."

She was killed by police gunfire during a confrontation between a home invasion suspect and authorities Friday night, a police spokeswoman said Saturday.

An officer fired eight shots at the intruder, who authorities say was holding a gun to Rebello's head during a home invasion robbery at an off-campus house in Uniondale.

One shot hit Rebello in the head, Maureen Roach, a spokeswoman with the Nassau County police, said.

The intruder, whom authorities identified as Dalton Smith, 30, of Hempstead, was struck seven times and died.

Smith invaded the home Rebello shared with her twin sister and two others during the predawn hours on Friday.

At some point, a female roommate of the twins was able to leave the home and call police, a police spokesman told CNN on Friday.

When a police officer arrived, Smith told the officer he was going to kill Rebello. He turned the handgun toward the officer, she said.

The officer, fearing for his life, drew his gun and fired, Roach said.

Authorities have not identified the officer.

At the time of the shooting, Smith was wanted for jumping parole, police said.

He was on parole for first-degree robbery and had an "extensive" arrest history that includes robbery, assault, and promoting prison contraband, said police in Nassau County.

A warrant for his arrest was issued April 25 for allegedly absconding from parole, police said

She described Rebello as a fun-loving, personable and self-aware young woman.