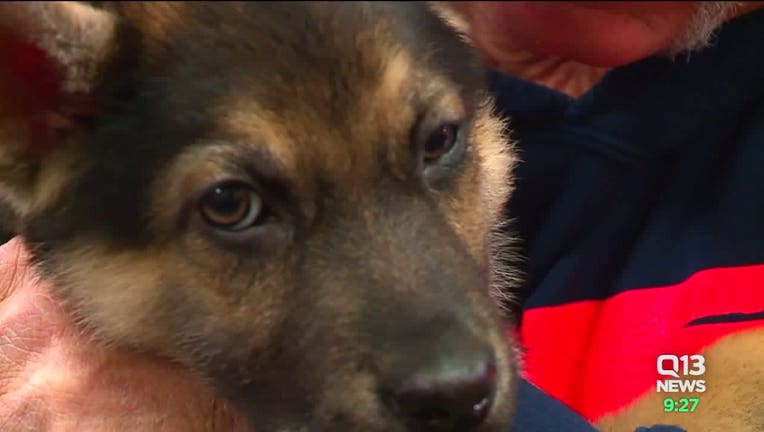 FERNDALE, Wash. -- An adorable puppy with a fatal heart condition and a huge social media following could be getting another chance at life after his "bucket list" went viral.

Logan, a 9-week-old German Shepherd puppy, was born with a heart condition, and veterinarians who cared for him said he didn't have long to live.

According to the rescue organization that's caring for Logan, Bellingham-based Rescued Hearts Northwest, his foster family and friends of the rescue group came up with a plan for Logan to live the ultimate puppy bucket list, including swimming in the ocean, park visits with his friends -- and an event at a local pet store in which hundreds of people showed up just to give Logan a hug.

Logan's precious face and viral bucket list have been shared across the country, and now, his story has reached a pair of Colorado State veterinarians who believe they can help.

"We sent him Logans records and they reviewed his EKG. We got word today ... that he believes he can do surgery on Logan to repair his heart!!!" Rescued Hearts Northwest said on its Facebook page.

Because the heart condition is so dire, the appointment is set for next week in Fort Collins, Colo., with surgery scheduled for the following day.

"This is the best news we could have ever asked for but we were hit with the reality of needing to raise the funds for the $4,000 surgery, transportation and lodging during recuperation in a very short amount of time," the group said.

And that's not the only hurdle the organization will have to leap to get Logan the surgery he needs.

Because of Logan's health issues, he is unable to ride in the cargo area of an airplane. Airlines have told Rescued Hearts Northwest that he also is too big to ride with a passenger on a plane.

"We were so close but are now at a standstill," the group said.

You can donate to Logan's surgery through PayPal -- rescuedheartsnorthwest@yahoo.com -- or send donations through GoFundMe or to the Rescued Hearts P.O. Box:

Please specify that the donation is for Logan.

The group is also looking for ideas or help to safely transport Logan to Colorado State University.