LYNNWOOD, WWash. - The U.S. men’s national soccer team makes their long awaited return to the World Cup on Monday morning. It’s been more than 3,000 days since their last World Cup game. We followed on fan from Lynnwood, who is excited to return to another World Cup as a fan.

It’s certainly a long trip from Lynnwood, Washington to Doha, Qatar. 7,367 miles if you check on Google Maps.

But we’re sure Christopher Talamantez is ready. Before he left on his trip last week, he showed us what he’d be packing.

"For this week and next week, nothing but red, white, and blue," said Talamantez. 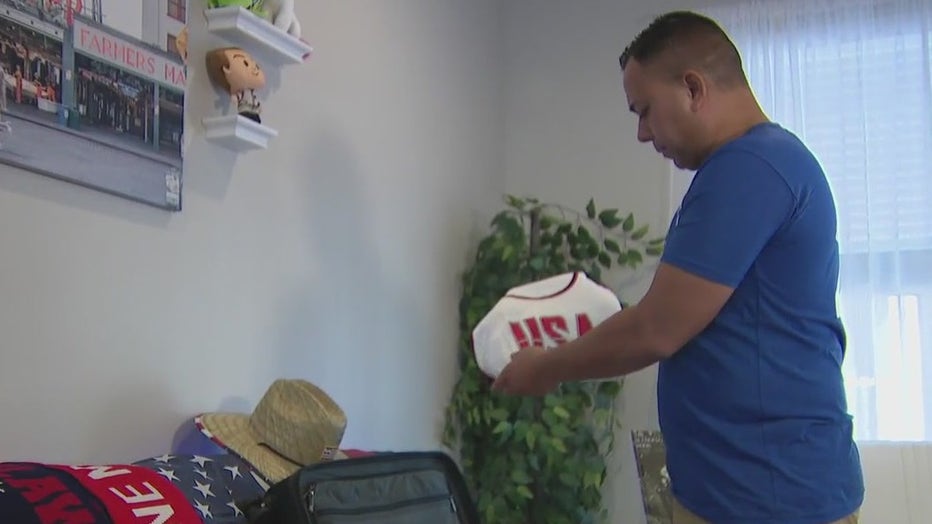 He wasn’t kidding. Hats, scarves, shirts, everything red, white and blue. He even showed us a shirt with a patriotic cat on the front.

"We’re cat people in our house," he said.

Talamantez even packed for a red, white, and blue sun hat for outside activities, outside of watching soccer.

"Then once we’re on our safari, some extra protection on the dome," he said. "Do a little safari with a camel, an overnight stay. Watch a traditional show, eat traditional food and hold a falcon."

The main focus though, will be watching the U.S. team play. It’s something he’s waited years for. He said, once the schedule was released, he jumped on chance to head to Qatar.

"Once I saw that England is matched up with USA, that’s when I hopped on my computer and went up trying to find a game ticket to purchase for that game," he said.

Where to watch the 2022 World Cup in Seattle

The 2022 World Cup is set to kick off on FOX on Nov. 20. While games could be watched at home, we've put together a list of places in Seattle where fans can watch some of the matches.

For the Lynnwood resident, this is not his first World Cup. He attended the 2014 World Cup in Brazil and was in the stadium at the time, when John Brooks kicked a game-winning goal against Ghana.

"The U.S. section we just hugged each other threw beer up in the air and had a blast," he said.

Christopher’s been to World Cup qualifiers in Mexico City and more recently in Coumbus, Ohio. And being from Puget Sound, he’s a Seattle Sounders fan too. He is looking to seeing local players Jordan Morris and Christian Roldan.

"He’s (Morris) very consistent. With Christian Roldan, he’s a team player. He’s almost like a second coach on the field. Where he can just take command," he said.

Getting to Doha was not easy. As Vice President of the fan group, "American Outlaws Seattle," they’ve worked on setting up travel packages for U.S. team fans.

But getting to Qatar, according to Talamantez was different.

"Initially they didn’t have the game tickets available. What they had available was the hospitality package. So those are from $950 to $2,000 ," he said.

Which he ended up doing for him and his wife. Games will be shown early in the morning in the U.S. . But in Doha, he said, it’ll be interesting to watch games late at night there.

But what’s cool about going on these trips, according to Talamantez, is the chance to meet other Americans who’ve made the trek.

"It’s sort of like a class reunion. Just pick up to where you left off," he said.