TACOMA -- Ever since a Tesla burst into flames along Hghway 167 earlier this week, everyone's talking about the safety of electric cars.

Fire crews in Kent had some trouble putting it out, and our questions about it led us to Pierce County's fire training facility. New recruits at Central Pierce Fire & Rescue spent Friday afternoon attacking a dummy car spilling with flames.

“It gives them that realization of how to put out a car fire,” said CPFR Capt. Woody Juarez. 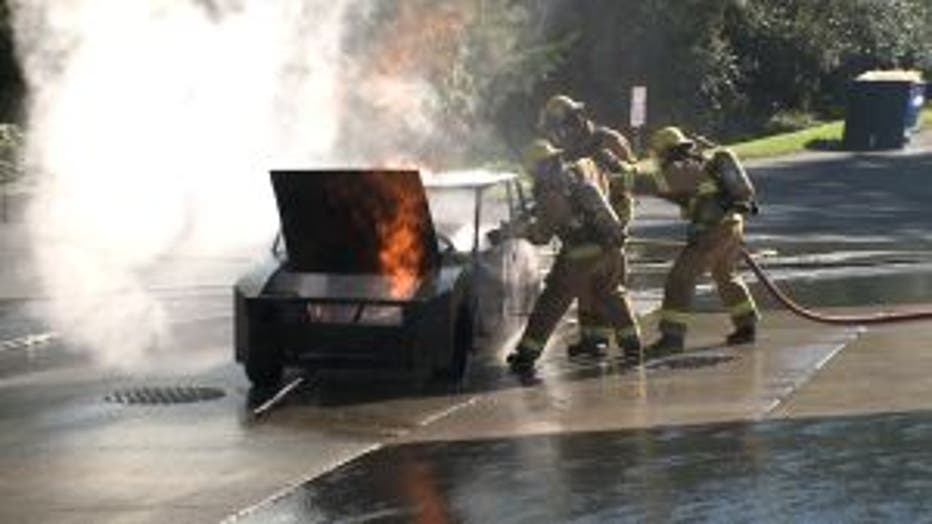 Car fire training is at the top of the list since an all-electric car went up alongside the highway after it struck a metal rod on the pavement. The driver of the Tesla was able to pull over before the flames erupted. No one was injured.

Gas-powered, hybrid or electric -- all car fires present a special set of challenges.

“There’s a lot more plastic, they burn a lot faster,” said Juarez. “It’s not like looking at a 1972 Buick that just didn’t burn that much. It burned, just not a quickly or as fast.”

For instance, lightweight plastics and other new materials used to build the latest models ignite faster than old steel panels.

“It’s constantly changing,” said Jeff Pugh with the Puyallup Extrication Team. “The coming of the new vehicles, the hybrids and electric vehicles, you bet it’s a huge learning curve.”

The Tesla fire was a first for Kent Fire & Rescue and the incident caught the attention of fire departments across the country.

Usually a combination of water and foam is the best way to put out a vehicle fire but it depends on the type of material that’s burning, said firefighters. Plus, the chemicals in hybrid and electric batteries are a new twist for firefighters.

Either way, Pugh said, a fire is still a fire.

“Whether it’s a battery pack burning or the parts of the car burning, it doesn’t matter,” said Pugh. “You’ve gotta cool it and take the oxygen away.”

Tesla’s CEO posted a message on his company's blog on Friday saying electric cars are safer in a fire because they don’t have a big tank of gasoline inside.

And as for the firefighters, they continue to learn from experiences like the Tesla fire; they'll add that knowledge and new techniques to training as things change.