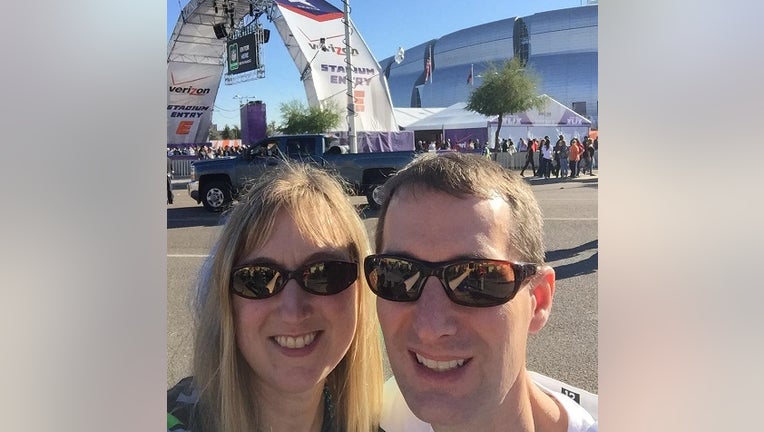 Melanie and Anton Faulk, of Bellevue, bought Super Bowl tickets, but this as as close as these 12s got to the game. (Photo courtesy of family)

BELLEVUE, Wash. -- The Attorney General's Office wants to hear from 12s who didn't get to go to the Super Bowl because ticket brokers didn't come through.

Melanie Faulk, of Bellevue, and her family are diehard Seahawks fans. And early in the season, they had a feeling the team was headed to another Super Bowl.

"In September, Anton said we'll dip into our life savings and we'll pick up tickets to go to the game, if we get in," Faulk said.

So, right after the NFC Championship game, they booked flights, arranged to stay with friends in Phoenix and then went online to find game tickets.

"We looked at the NFL Exchange, StubHub and Vivid Seats," she said.

Vivid was the only site with specific seats listed. Since the Faulks had brought from Vivid Seats before and everything worked out, they felt confident using them again. But when they got down to Phoenix, they found out Vivid didn't have their tickets.

"They're like, 'The seller still hasn't dropped them off, but we're sure they're going to. They're reputable, we've dealt with them before,'" Faulk said.

But at 1 p.m. on Game Day, the broker called them and said they couldn't fulfill the ticket order.

"They didn't really give a good explanation," she said. "We just sat there going, what are we going to do? We're sitting there, outside the stadium, can't get in."

The Attorney General's Office says what Vivid and other ticket brokers did to Super Bowl fans isn't necessarily illegal.

"Some brokers call this a 'try and get' policy, which means they'll sell you a ticket they don't have and get it for you," said state Assistant Attorney General Jake Bernstein.

Faulk said her broker didn't, so she is going to file a complaint. She said that even though the company gave her a 200% refund, the money doesn't change anything.

"No, because it doesn't pay for the experience; we'll never get to be there for that," she said.

The Attorney General's Office says any fan who had a similar experience should contact their office and file a consumer complaint so they can investigate.