The Massachusetts Emergency Management Agency reports more than 116,000 power outages in the state as of Saturday afternoon.

Be sure to keep gas meters and vents clear to prevent carbon monoxide poisoning.

Duxbury, MA firefighters warn to be mindful of the dangers of carbon monoxide.

"We just cleared another carbon monoxide call caused by exhaust from a generator," they tweeted Saturday afternoon. "Please make sure you keep generators away from your living spaces."

Learn how to safely use generators and heaters during winter storms at this link. 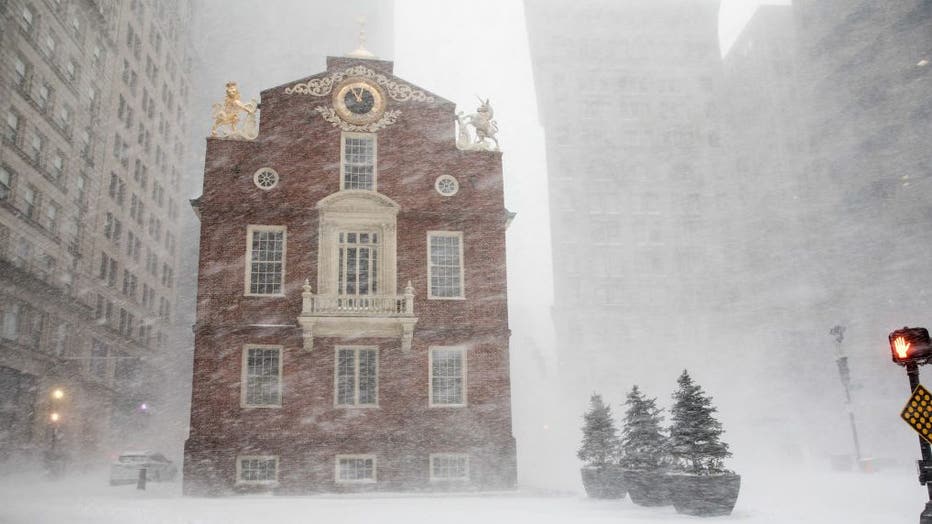 Boston has officially met blizzard criteria with a visibility of less than 1/4 mile and wind gusts higher than 35 mph for 3 consecutive hours, according to the National Weather Service.

FOC Weather Multimedia Journalist Robert Ray is in Gloucester, Massachusetts, where a 68 mph wind gust was reported on Saturday. 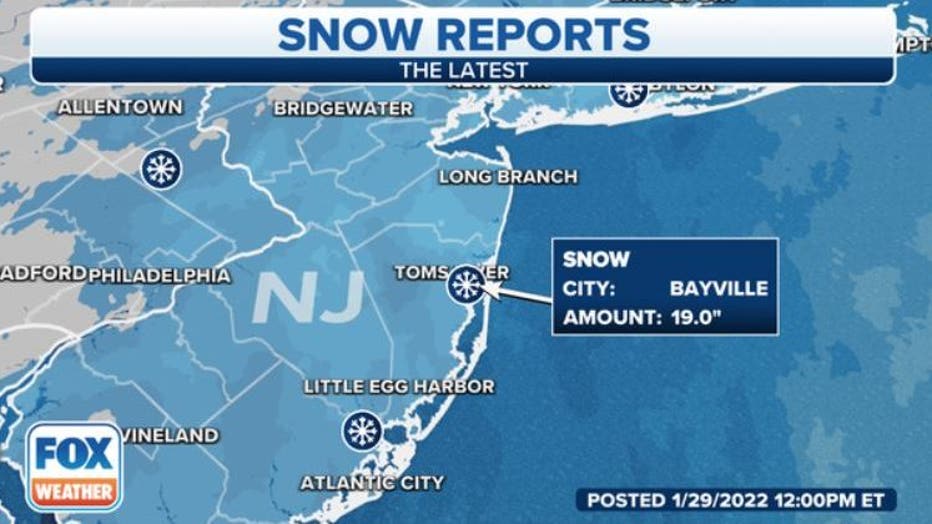 A new top snow total of 19 inches has been reported in Bayville, New Jersey.

The National Weather Service has confirmed blizzard conditions along beaches in New Jersey and Delaware Friday night and Saturday morning.

85% of flights canceled at Newark Airport

More than 600 flights have been canceled at Newark Airport so far on Saturday. 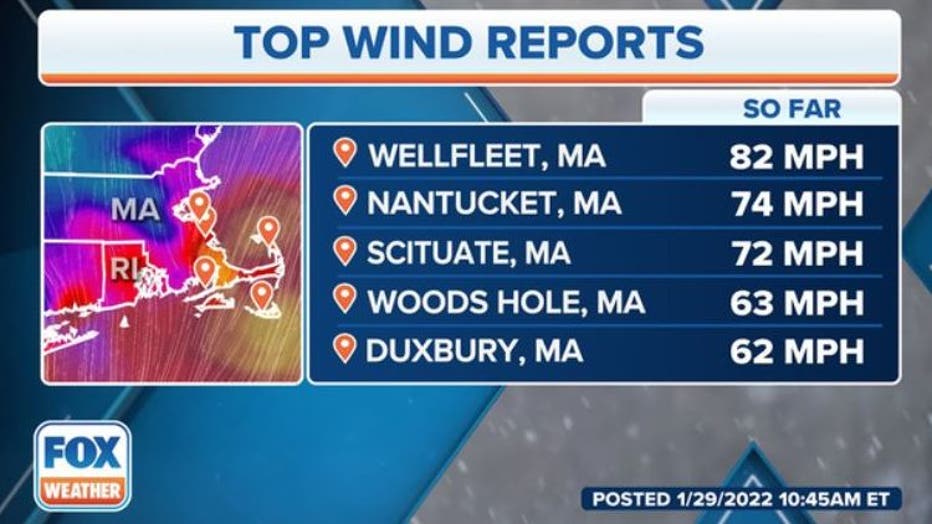 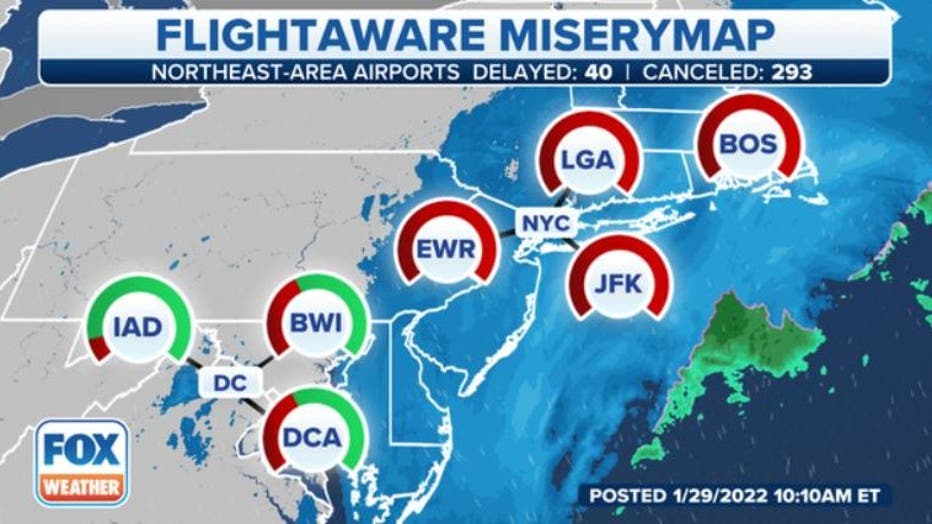 Current airport conditions in the Northeast

'Large and dangerous storm': MassDOT crews out in full force

State officials are warning people in Massachusetts to stay off the roads on Saturday.

For more information on this powerful nor'easter, click here.

No on-street parking on any street city-wide from midnight to 7 a.m. Sunday.

Updated snowfall forecast for the Northeast 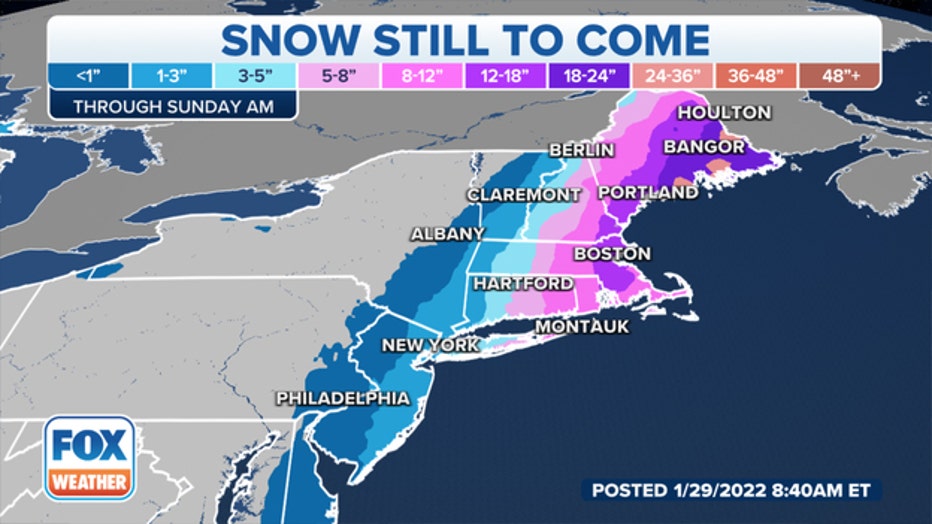 The highest snow totals from the nor'easter are expected in southeastern New England from Rhode Island into eastern Massachusetts, including Boston, where this could be one of the city's all-time biggest snowstorms.

At least 6 inches of snow is also possible farther south from the New York City tri-state area and the Philadelphia metro area into the Delmarva Peninsula.

Check out the road conditions from a plow's perspective in Massachusetts 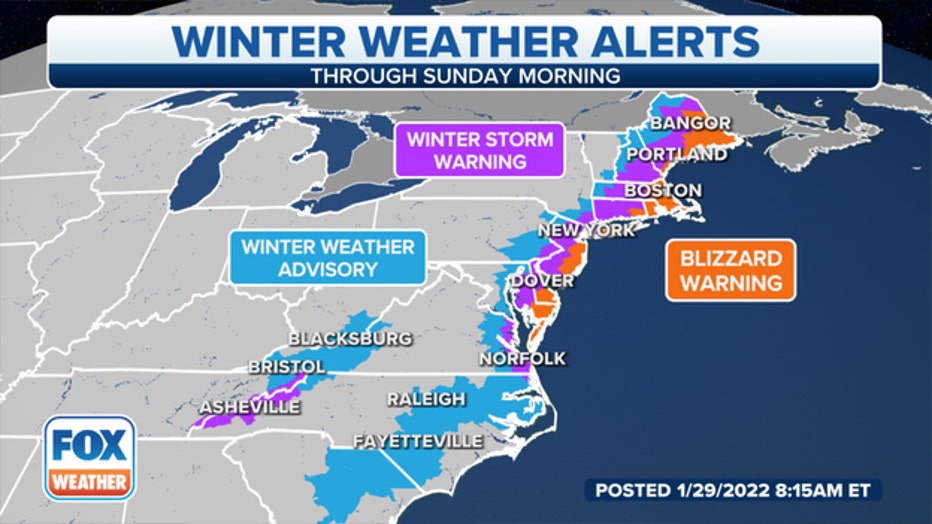 A look at the conditions this morning from Chatham, MA, where there is an ongoing Blizzard Warning.

The latest wind report shows it has gusts of 46 mph.

Chatham could see upwards of two feet of snow with this storm.

WHEN STORMS ‘BOMB OUT’: EXPLAINING HOW A BOMB CYCLONE FORMS

Flooding has been reported across Nantucket in Massachusetts.

Strong winds have led to flooding up and down the East Coast as a powerful nor'easter gains strength.

Eversource in CT shows equipment in its warehouse ready to go

"Stocked and ready to go"

Eversource in Connecticut shows materials on hand ready to be sent out and make repairs as power outages start to climb,

Wind reports continue to get higher 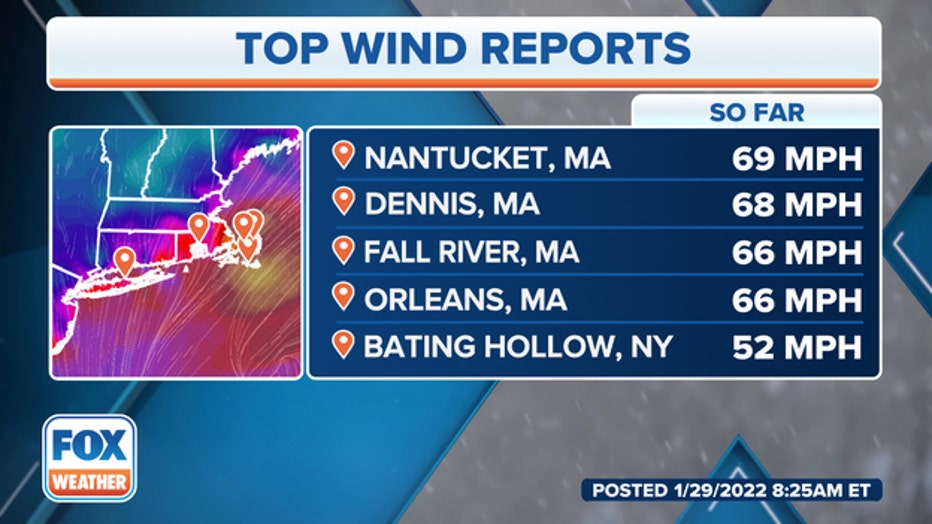 The New Hampshire Department of Transportation is urging drivers to consider postponing travel until after the storm.

NWS: Band of snow with snowfall rates of 2.5 inches moving into Mass.

A wind gust near 60 mph has been reported at the airport on Nantucket so far Saturday morning.

Strong winds and flooding are a concern as a powerful nor’easter moves up the East Coast.

Read more about the storm by clicking here.

Watch: Waves crashing over the seawall in Weymouth, Mass.

Video posted to Twitter shows large waves that have started crashing over the seawall in Weymouth, Massachusetts.

Police are urging everyone to stay off the roads as a potentially historic storm moves up the East Coast.

Earlier, full restrictions were in place meaning only cars were allowed on the bridge.

Philadelphia International Airport has reported more than 300 flight cancellations on Saturday due to heavy snow and high winds from the nor'easter.

The airport said the canceled flights include both outgoing and incoming planes. There were at least 78 cancellations and 267 delays for departing and arriving flights on Friday, according to FOX 29.

Spotter reports 11 inches of snow in Cape May County, NJ

A major nor'easter will become a blizzard for parts of the East Coast this weekend as heavy snow and high winds pound areas from the mid-Atlantic to Maine.

FOX Weather Multimedia Journalist Robert Ray is in Gloucester, Massachusetts, where winds are picking up and coastal flooding is a concern.

FEMA in contact with governors in states affected by storm

FEMA Administrator Deanne Criswell spoke with several governors on Friday ahead of the nor’easter.

"We remain in close contact with our state partners as they prepare for this storm," Criswell said in a statement on Friday. "FEMA is prepared to assist communities who may face impacts caused by the storm, and we continue to encourage everyone to follow the guidance of their state and local officials."

98% of flights out of LaGuardia Airport canceled Saturday

According to FlightAware, 98% of all flights out of LaGuardia Airport are canceled Saturday. There are only eight flights scheduled to depart that airport.

The National Weather Service has confirmed blizzard conditions near the town of Lewes in Sussex County, Delaware. Webcams from the area showed a whiteout early Saturday morning.

According to the NWS, a snowstorm must reach the following criteria to become an official blizzard: sustained winds or frequent gusts to at least 35 mph and considerable falling and/or blowing snow that frequently reduces visibility to one-quarter mile or less, both of which must persist for a period of three hours or longer.

NOAA's Weather Prediction Center says heavy snowfall rates up to 2 to 4 inches per hour are expected today along portions of the mid-Atlantic and New England coasts.

The heavy snow in combination with strong winds will produce dangerous blizzard conditions in some coastal areas, resulting in nearly impossible travel at times.

Power outages likely for parts of the Northeast

The combination of heavy snow and high winds is expected to bring down power lines in areas of the Northeast. Coastal parts of New England have the highest chances of seeing power outages. 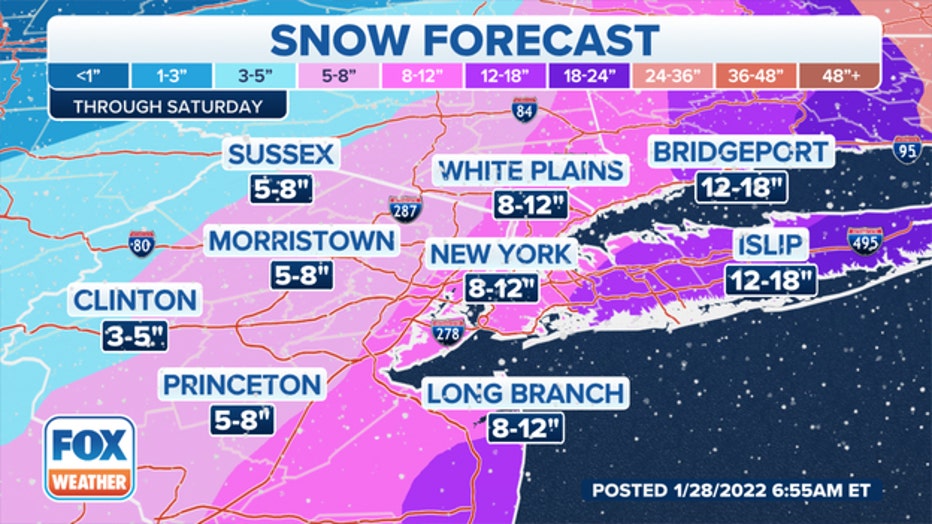 Snow is falling in New York City, and before all is said and done, upward of a foot could fall in the tri-state area. The heaviest snowfall is expected to be over eastern Long Island, where more than a foot of snow could pile up. Areas to the west and away from the coastline will see considerably less snow.

Make sure to follow FOX Weather on social media for more videos, photos and coverage of the nor'easter. Don't forget to tag us in your weather photos or use #FOXWeather.