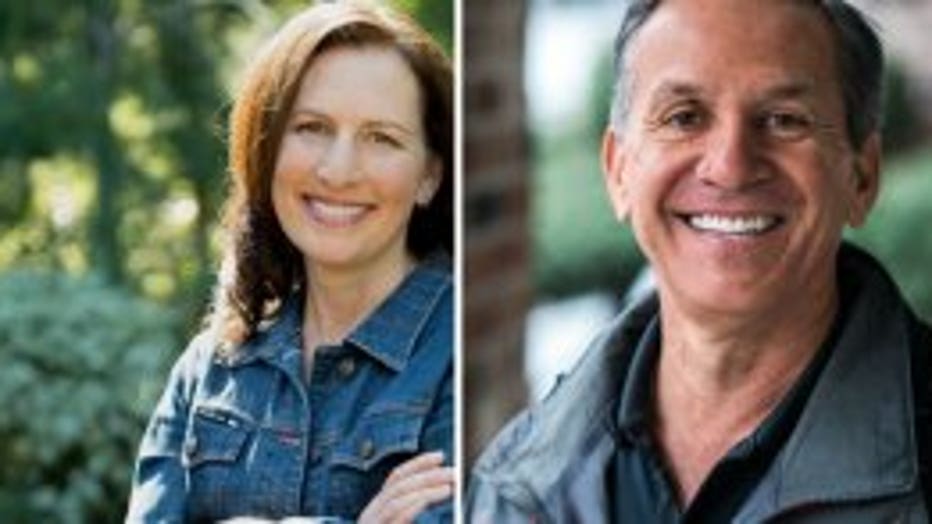 Kim Schrier, a Democrat, and Republican Dino Rossi will face off in the November election for the U.S. House seat held by retiring Rep Dave Reichert, R-Wash.

Democrats are trying to flip an open U.S. House seat in Washington state that's been in GOP hands since it was created nearly three decades ago, running a political newcomer and national party favorite against a well-known Republican in a race that could be critical to controlling the chamber.

As part of a surge of women seeking office for the first time, Dr. Kim Schrier's candidacy will test how far a "blue wave" can go in the only congressional district that substantially blends Washington's wide-ranging political spectrum, from the ultraliberal far eastern Seattle suburbs to solidly conservative rural areas.

Millions of dollars of outside money has poured in to the 8th Congressional District, which is one of two dozen districts nationwide held by the GOP but whose voters chose Hillary Clinton over Donald Trump in the 2016 presidential election. It's one of the tightest midterm races and a critical potential pickup for Democrats trying to take the U.S. House of Representatives for the first time since 2010.

Republican Rep. David Reichert is retiring from a seat he's held since 2005.

Schrier, a 50-year-old pediatrician and Type 1 diabetic, said she was moved to run after Reichert voted to repeal former President Barack Obama's health care law. She has made health care a signature campaign issue.

"People relate to the fact that I'm ticked off when our government tries to take our health care away, and I believe health care is a human right, and that is just plain wrong," Schrier said.

She faces Dino Rossi, a former state lawmaker, who has carried the district in three statewide races. Rossi has been on local ballots more than 10 times but hasn't won a general election in 18 years.

The district created after the 1980 census has never sent a Democrat to the House but is anchored in a corner of the deep-blue Seattle region.

"The 8th District is a lot more sensitive to public sentiment so that's the dynamic we're seeing. It's playing out," said Stuart Elway, an independent pollster. "If there's not a blue wave, it's going to be close. If there's a red wave, he's going to win."

What Schrier may have in her favor is voter distribution. More than 82 percent of the district's voters live in places Clinton carried, mostly in King County, where Seattle is located and which overwhelmingly supported her.

Rossi, a 58-year-old whose background is in commercial real estate sales, has wide name recognition and is perhaps best known for losing the country's closest race for governor in 2004. He also had a leading role in balancing the state's budget 15 years ago and most recently served two stints as an appointed Republican fill-in in the state Senate.

"These folks know me pretty well, but I spend a lot of time knocking on doors just to remind them why they liked me in the first place," Rossi said.

If elected, Rossi said he would work to connect the parties and seek a place on the House's chief tax-writing Ways and Means committee. Rossi campaigns as a "fiscal conservative with a social conscience" while noting his work with Special Olympics.

In his last campaign for office — a 2010 matchup against incumbent U.S. Sen. Patty Murray — Rossi was endorsed by the Family Research Council, an anti-gay and religious conservative group. He also has signed the tea party-backed "Contract From America," which favors a flat income tax, more oil exploration and strict limits on federal spending. Rossi says those groups aren't involved in his current campaign.

Rossi calls Schrier a product of an anti-Trump movement, slamming her lack of leadership experience and painting her top legislative priority of expanding Medicare as a "government takeover of health care" and lacking in funding details. He said he would support future efforts to repeal Obama's health care law and defund Planned Parenthood.

Schrier said allowing Medicare to be a public buy-in option will allow for true competition and effectively pay for itself. She calls Rossi career politician, who will "rubber stamp" the Trump agenda on health care and environmental issues, but highlights where she agrees with the GOP.

For independent voters like Maggie Lemenager, she said she's leaning toward Rossi because the economy has soared under GOP control. The 65-year-old retired teacher from Renton said she voted for Trump in 2016.

"The economy is the big one," Lemenager said of her priorities.