Limited number of tickets to go on sale for World Series, NLCS at Globe Life Field

Major League Baseball has announced it will allow a limited number of fans in the stands when the playoffs come to Globe Life Field in Arlington.

ARLINGTON, Texas - Major League Baseball has announced it will allow a limited number of fans in the stands when the playoffs come to Globe Life Field in Arlington.

The league will make 11,500 tickets available for each game of the National League Championship Series and the World Series. Tickets sales start next week.

There will only be about a quarter of what the ballpark can hold, but it’s the first time any fans will be watching baseball there since it opened.

Fans will be a good distance away from players, and safety measures will be in place.

Rangers fans will have their first chance to see baseball in the new park. Unfortunately for them, they won't be seeing the Rangers. Season ticket holders will get the first chance to buy tickets.

It will start with the National League Championship Series on Oct. 12 and continuing through the World Series. 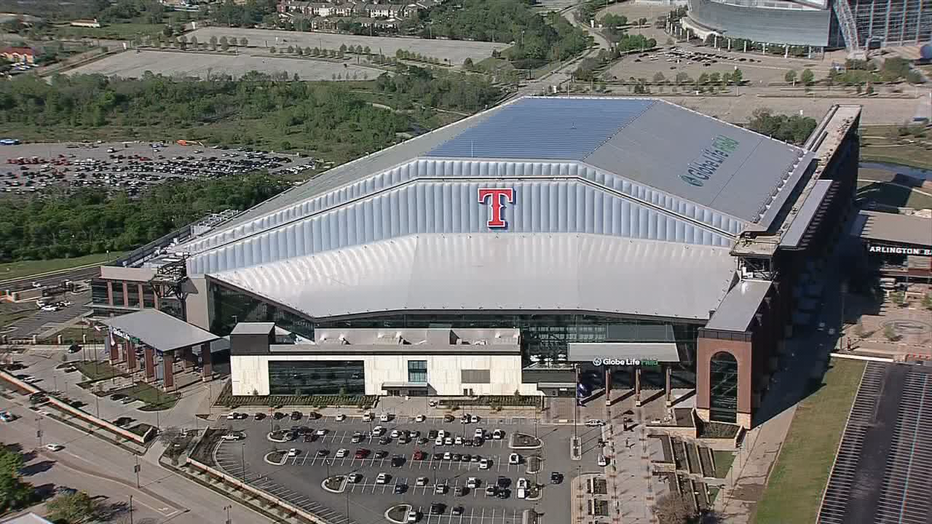 About 11,500 tickets will be available. That includes 10,550 scattered throughout the stands. The rest will be in luxury suites.

Seating pods will be in place to enforce social distancing.  Masks will be required except when eating or drinking.

People who buy a pod of seats cannot sell individual seats to people who aren’t in their party.

No fans will be seated within 20 feet of any player.

For Rangers Executive CP of Business Operations Rob Matwick, this first year at the new park with short seasons and without fans has been a nightmare. But he says Wednesday’s developments bring a bit of a silver lining.

“This is what we’ve been pointing towards since we started the construction, gosh, four years ago now. To see it come into fruition is pretty significant,” Matwick said. “It’s not necessarily the circumstance we’d hope to have it in. We’d rather have Rangers on the field. But it will be exciting, nonetheless, to have fans be able to go into Globe Life Field and see baseball in 2020.”

Limited number of tickets to go on sale for World Series, NLCS at Globe Life Field

The league will make 11,500 tickets available for each game of the National League Championship Series and the World Series. Tickets sales start next week.

It’s the news Randy Ford, owner of J. Gilligan’s Bar and Grill in Arlington, has waited two weeks to hear.

“Now the fact that we can have fans, that a game changer. The cardboard cutouts were cute and novelty, but they don’t drink any beverages to speak of,” he said.

J. Gilligan’s is just a five-minute drive from the ballpark, and Ford hopes the potential for both out-of-town and in-town fans in Arlington will bring financial support for local businesses trying to stay afloat.

“That will be great because other people coming in from other parts of the country, I know for the whole area, that exciting news,” he said.

The tickets for the NLCS at Globe Life Field go on sale Oct. 6 this coming Tuesday at 10 a.m. at mlb.com and texasrangers.com.