WHATCOM COUNTY, Wash. -- Half circles of leafy green beauty, arching up about seven feet high and stretching into the distance nearly as far as the eye can see. Don't call them vines though, they're canes.

By the summer, they'll hold one of the sweetest natural treats you'll find: Washington red raspberries. But the tiny fruit is having some big problems. A huge portion of the U.S. raspberries are grown here in the far northern corner of the state. Financial, trade and weather issues could doom many family farmers who have been growing raspberries for generations.

"I love being outside, this is a beautiful part of the world," Jon Maberry says.

Maberry is one of those farmers. His great grandfather literally put down roots outside of Lynden in the 1940s.

"We just gotta make it through this tough time," he says.

Things are not as sweet as they should be for Maberry, his family or his employees. While they farm and harvest about a thousand acres, about five percent are the sweet Hood strawberries, 35 percent are blueberries and the other 60 are red raspberries.

"Family farming really ties you back to the crop," says Maberry. "It's the soils -- we grow about 85% of the frozen raspberry crop in just a ten mile radius from here."

The berries on these canes will be ready to harvest in July, but this has already been a brutal year for some of the growers in western Washington.

Whatcom County in particular has had a severe winter, one of the worst in recent memories. They also face stiff competition from foreign countries -- which could put a lot of these companies or farms out of business.

"Historically, when we've seen a short crop, we see prices rise and the markets reacts to it, but with this foreign product coming in and the Mexico concerns -- that's not going to be the case," says Maberry. 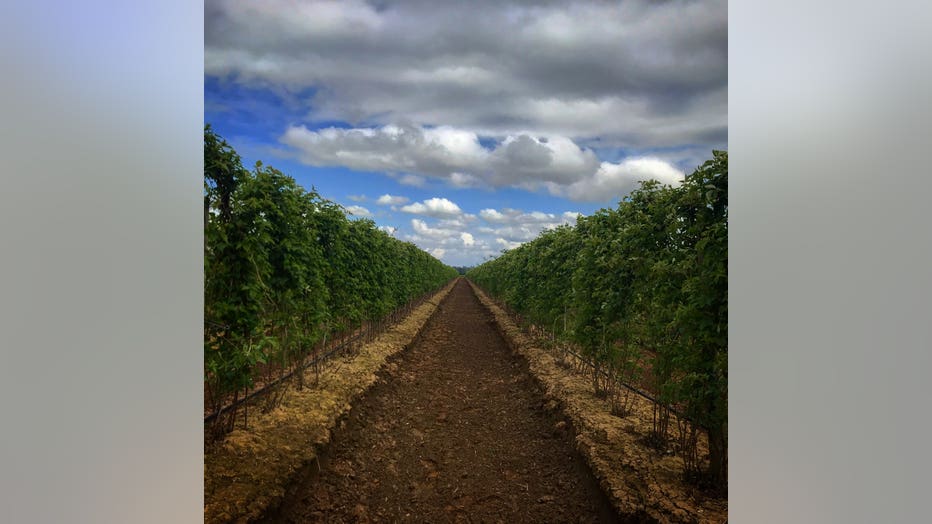 "It's beyond serious, he replies. "I mean we're right on the edge."

Washington state's congressional delegation is getting behind growers like Jon Maberry and, as of late April, seeking answers from the U.S. Trade ambassador to look into the "surge of imports from Mexico and eastern Europe."

"And if nothing happens," says Maberry, "especially on the trade issues and the foreign stuff coming in undercutting us, we could lose half our grower base."

The Washington Red Raspberry Commission estimates the number of foreign imports in 2018 almost doubled from the year before. The organization says foreign growers can undercut pries because their products offer less.

"There's limited environmental protections , if people care about that," says Maberry. He lists off the other things buyers of his raspberries get. "Worker standards, labor standards, as well as food standards, and safety."

Jon and fellow growers will be undertaking promotional campaign to both promote and distinguish Washington raspberries-- and push for more clear country of origin labeling. But he says the problem of foreign competition in our food supply goes to every aisle of the grocery store.

"We're importing about 50 percent of our fruits and vegetables now," says Maberry. "And that number continues to rise, and there's really no reason for that."

He hopes consumers read the labels and decide to buy local -- before there are no local farmers left to buy from.