The letters were sent using Washington State Sheriff's Association letterhead and purported to be signed by Lewis County Sheriff Rob Snaza, but Snaza said he never authorized the use of his name or the sheriff's association's logo.

Snaza said in mid-November, he met with a group of people who were concerned about the statewide mask mandate and customers being removed from businesses for refusing to wear a mask. They asked the sheriff if he and other elected sheriffs in Washington would support a letter ordering those businesses to ceast and desist. 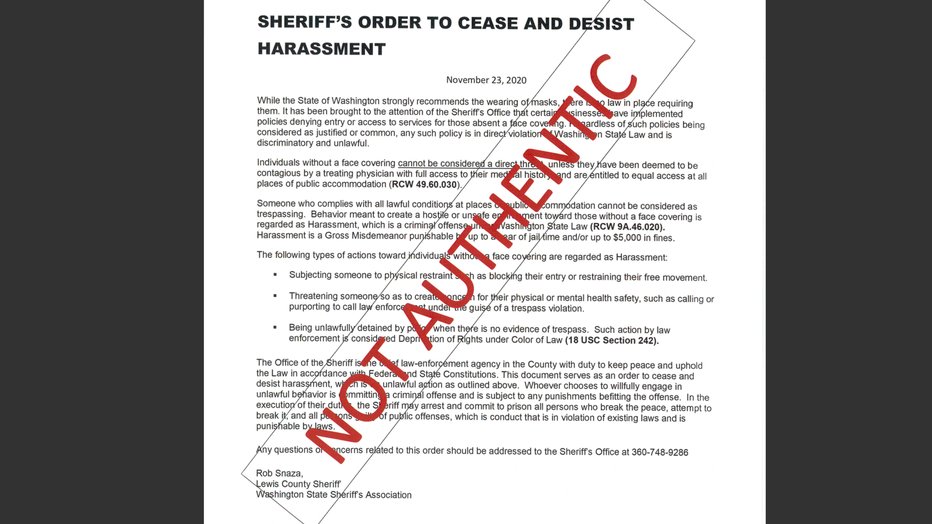 Snaza told the group he would discuss the issue with other sheriffs, but he said he did not offer support to the letter.

A week later, the organization that met with Snaza starting sending the letters without permission. Snaza did not name the group that asked him for support.

"I appreciate the views of others, but do not support the use of my name, or that of my office, to further agendas I have not lent my support to," Snaza said. "I will continue to voice my opinion regarding concerns impacting our community, and encourage others to continue to contact me regarding their own concerns."

Prosecutor Jonathan Meyer said the letters have caused "heightened emotions, tension, and stress regardless of one's position on the issues.

"The intentional spread of inaccurate information in the names of a public official and a professional law enforcement organization is reckless, irresponsible, and, perhaps, criminal," he said.