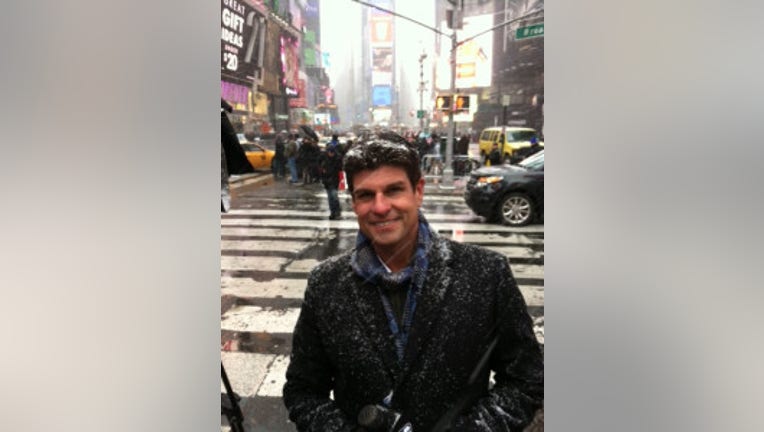 NEW YORK CITY -  It’s snowing in New York. And the Seahawks fans filtering into the city for tomorrow’s game against the Giants at MetLife Field couldn’t be happier about it. “This is what football is all about”, says Tony DiCipprio, a Seahawks fan from Boston who made his way to New York for the game.

“This is a preview of the Super Bowl for the Seahawks, and I think getting used to playing in the snow here is a great thing,” DiCipprio says,

MetLife Stadium will host the Super Bowl in February. The Seahawks can take a huge step toward locking up the top seed in the NFC and homefielld advantage throughout the playoffs with a win against the Giants. They are also getting a good taste of what New York winter is all about. 4 to 6 inches of snow is falling on the city today, with high temperatures right around freezing.

“The snow is a non-factor for New York”, says Dave Amal from Brooklyn. “You can throw anything at New Yorkers, and we can deal with it. The Ball Drop on New Year’s Eve, the Super Bowl, the snow, it doesn’t matter. We just get the salt on the streets, and the party goes on. New York knows how to throw a party.”

The Super Bowl is one of the biggest parties in the world, and the city will be transformed for it. Ten blocks of midtown Manhattan near Times square will be blocked off to traffic, and turned into Super Bowl boulevard: A football themed fan experience, with a  concert stage, and even a toboggan run right down Broadway.

Tonight, Seahawks fans are gathering at Manhattan’s official Seahawks bar, Carlow East, at 84th and Lexington. I have heard about this place, and I’m looking forward to checking it out for myself. There will be hundreds of Hawk fans packing the place.

If the Seahawks wanted a dress rehearsal for that big game in February at MetLife Stadium, they couldn’t have asked for a better stage. The Great White Way is blanketed in snow. And even though it’s going to be cold tomorrow, Hawk fans say “Let it snow!”