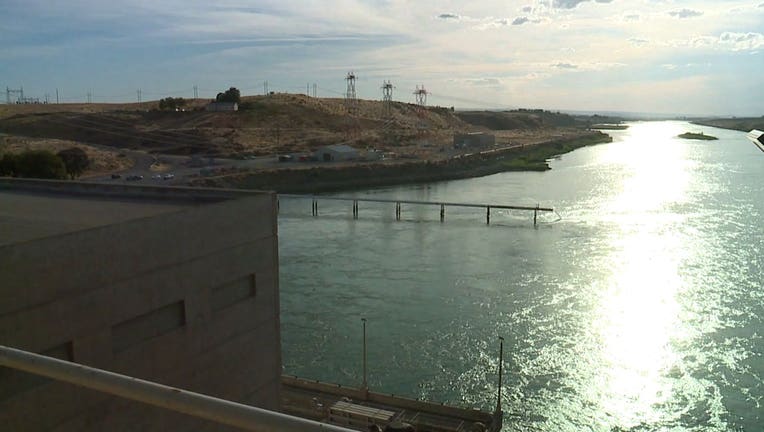 SPOKANE, Wash. - The record-shattering heat wave in the Pacific Northwest prompted fishing and conservation groups to ask a federal court Friday to order more spill from dams on the lower Snake and Columbia rivers next spring, which could aid the migration of endangered salmon and steelhead runs.

Earthjustice, on behalf of a coalition of fishing and conservation groups, asked a federal court in Portland, Oregon, for more water to be released to help the fish navigate a series of dams in the river basins. Increasing the amount of water helps flush young fish along their river migration to reach the ocean where they mature.

But increasing spill also means that water is not available later to generate power.

The groups are also seeking lowered reservoir levels, which are routinely too hot, to help speed fish migration.

"Right now we’re back in court asking for another stop-gap measure to slow the trend toward extinction of these fish," Earthjustice attorney Todd True said.

The Columbia River Basin was once the greatest salmon-producing river system in the world. But all remaining salmon on the Snake River, its largest tributary, now face extinction. Four dams in eastern Washington state — Ice Harbor, Little Goose, Lower Monumental and Lower Granite — slow passage along the lower Snake River, a major migration corridor linking pristine cold-water streams in central Idaho to the Columbia River and out to the Pacific Ocean.

The dams plus rising water temperatures in the reservoirs make the passage increasingly deadly, conservation groups contend. Many are calling for the four dams to be breached.

In 2015, some of the earliest and hottest weather on record produced warm river temperatures that killed more than 90% of all adult sockeye salmon returning to the Columbia Basin, conservation groups said. State agencies have since had to limit or cancel fishing seasons to protect the dwindling population. This summer could be a disaster for Snake River salmon with its record-breaking heat, the groups said.

Climate change has made the West much warmer and drier in the past 30 years, and scientists have long warned that the weather will get wilder as the world warms. Special calculations are needed to determine how much global warming is to blame, if at all, for a single extreme weather event.

The litigation challenges the most recent plan for dam operations issued by the Trump administration in late 2020. That plan called for the same operations the courts have consistently rejected for more than two decades.

Numerous groups that use the river system have opposed breaching the four dams, along with mostly Republican politicians in the region who argue the dams provide many benefits, such as electricity to power air conditioners during the heat wave.

"At a time when the Pacific Northwest is emerging from the pandemic, experiencing historic heat that has led to drought, wildfires, and significant loss of life, and is faced with rampant homelessness, it is difficult to imagine a group filing a motion that will greatly increase the electricity costs for millions of residents, decrease our clean energy generation, and double the risk of regional blackouts," he said.

The request for a preliminary injunction allowing more spill lists the National Marine Fisheries Service, the U.S. Army Corps of Engineers and the U.S. Bureau of Reclamation as defendants.