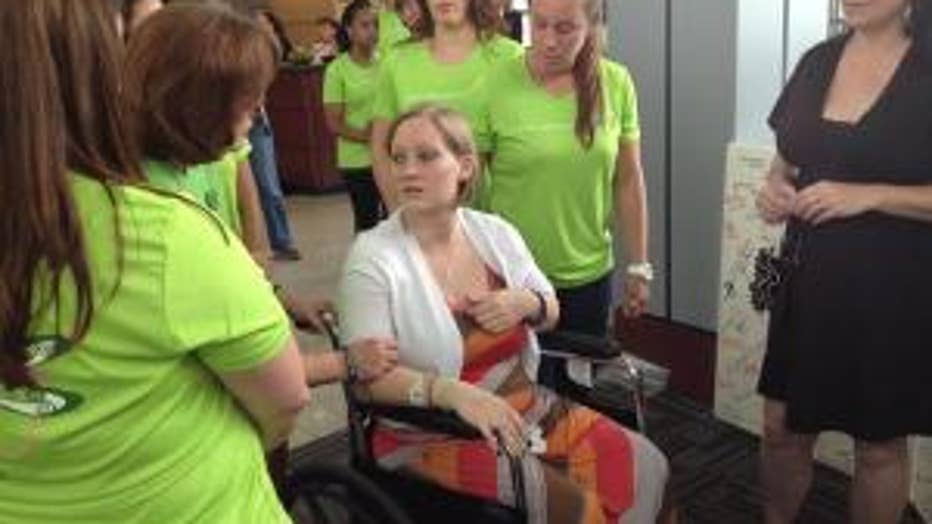 That's how long she was hospitalized after bomb blasts at the Boston Marathon ripped apart her legs.

She was the last of the more than 250 victims from that attack to be released.

"I leave here today -- after 11 surgeries, some pretty dark moments, and 50 days in this hospital -- with nothing but admiration for this great city," said Brannock, who was treated at Beth Israel Deaconess Medical Center in Boston.

On the day of the marathon, she, her sister and her brother-in-law had gone to watch Brannock's mother run.

They were standing near the finish line when the bombs went off.

"I fell backwards, and I could see oranges and yellows," Brannock told CNN on Monday. "I could hear the sirens and people crying and screaming. But I never heard the actual boom."

"I had a conversation with God in my head, and I told him I wasn't ready to go."

Just at that moment, a woman crawled over to Brannock and grabbed her hand. She used her belt as a tourniquet on Brannock's leg.

"She had heard me screaming for help and she said, 'My name is Joan from California, and I'm not going to let you go.' And she stayed with me the whole time."

Brannock, 29, credits this mystery woman with saving her life. She desperately wants to find and thank her.

Brannock, a preschool teacher from Maryland, suffered severe bone and tissue damage, requiring the amputation of her lower left leg.

"I would not be here today without the talent and devotion of my care team, as well as the first responders and the marathon spectator -- who I only know as 'Joan from California' -- wherever you are -- you saved my life," she said.

The double bombings near the finish line of the Boston Marathon on April 15 killed three people and injured at least 264.