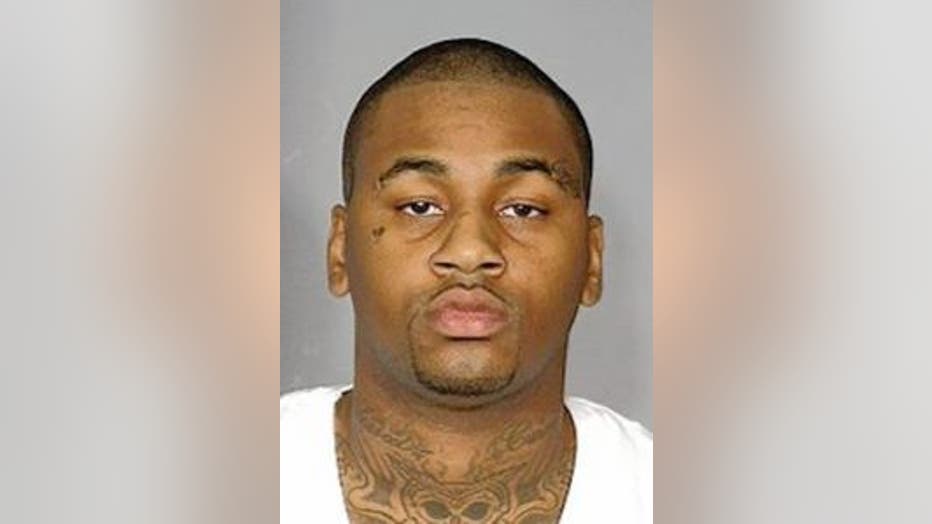 A man suspected in a deadly car-to-car shooting in the heart of the Las Vegas Strip boasted online about living a fast life of guns, cars and women.

Ammar Harris, described by law enforcement officials as a man with an "extensive and violent criminal history," is accused of being the gunman in the Feb. 21 shooting that killed three people, including Kenneth Cherry Jr., an Oakland native and rapper known as Kenny Clutch. Harris was arrested in Los Angeles on Thursday.

Harris is slated to appear in a downtown Los Angeles courtroom Monday for an extradition proceeding.

According to law enforcement sources, Harris operated as a pimp in Las Vegas. In a video released by Las Vegas police, Harris flashed a fistful of $100 bills as he bragged about the money he made. He boasted about money, guns, expensive cars and run-ins with the law on social media accounts, authorities said.

On one social media site, using the name Jai'duh, someone authorities believe was Harris posted pictures of stacks of $100 bills and a Carbon 15 pistol.

Harris' police record includes a 2010 arrest in Las Vegas on suspicion of pimping-related offenses of pandering with force and sexual assault. He has previously been arrested on suspicion of a variety of crimes in South Carolina and Georgia, authorities said.

Las Vegas police said Harris opened fire from his Range Rover on Cherry's Maserati on Las Vegas Boulevard after an altercation at a valet stand at the Aria hotel resort.

The Maserati then sped into the intersection at Flamingo Road, where it rammed a Yellow Cab, which erupted in flames near the mega-wattage casinos of the Bellagio, Flamingo and Ceasars Palace. The explosion killed the taxi driver and the passenger inside.

Cherry and a passenger in his Maserati were taken to a hospital, where Cherry was pronounced dead. Four other vehicles were involved in the fiery crash, which left three other people with injuries.

"What I can tell you is that Mr. Harris' behavior was unlike any other I've seen, and I've been in this community in law enforcement for 32 years," Clark County Dist. Atty. Steve Wolfson said.

"I cannot imagine anything more serious than firing a weapon from a moving vehicle into another moving vehicle on a corner such as Las Vegas Boulevard and Flamingo."

Even in a city accustomed to spectacle, the shooting and collision were shocking.

On the night of the shooting, Harris was accompanied by three people in his Range Rover, none considered suspects, said Lt. Ray Steiber of the Las Vegas Metropolitan Police Department.