As cleanup continues across the country from Hurricane Ida, this season’s third major storm continued to churn in the open waters of the Atlantic Ocean.

On Friday night, Larry intensified into a category 3 hurricane, the National Hurricane Center reported, sustaining winds near 115 mph. Accuweather meteorologists said they expected it to become a Category 4, which carries winds from 130-156 mph. Anything above a category 3 is considered a "major" hurricane.

Larry was about 900 miles east of the Northern Leeward Islands Sunday, meaning it won’t be nearing land anytime soon.

The storm is projected to remain over the open waters of the Atlantic for several more days, but will eventually approach Bermuda and make a close pass to North America, Accuweather said.

The National Hurricane Center said the threat of heavy rainfall, coastal flooding and strong winds for the island country was possible by the middle of this week. 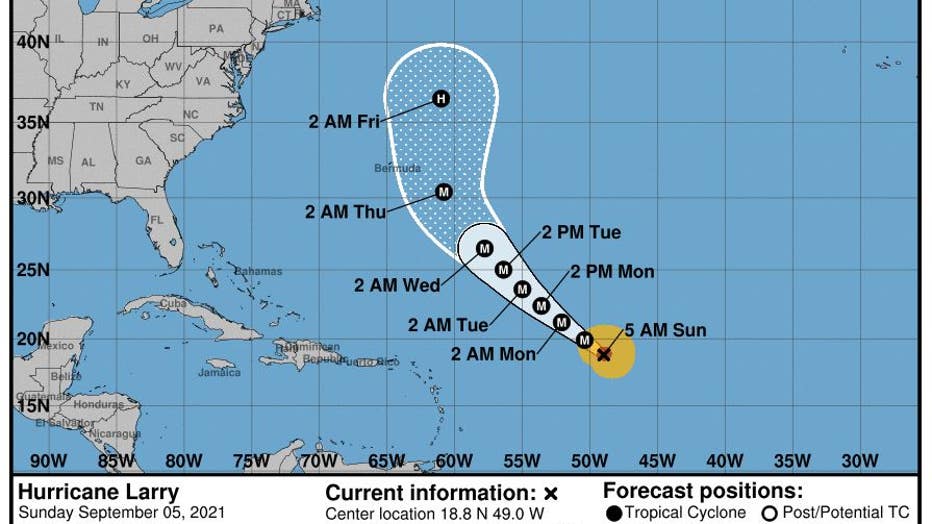 Depending on the path the storm takes, after nearing Bermuda the storm was predicted to then take a turn away from the U.S. and curve off to the northeast.

Meanwhile, the National Hurricane Center issued an advisory saying dangerous surf and rip currents are expected to develop along Atlantic shores in the coming days. Significant swells were predicted to reach the eastern United States after Labor Day.

"These swells are likely to cause life-threatening surf and rip current conditions, and beachgoers and other interests along these coasts are urged to follow the advice of lifeguards and local officials this week," the National Hurricane Center said, adding that Larry was expected to remain a major hurricane through the middle of this week.

Larry is this season’s third major hurricane, with Grace and Ida coming before.

RELATED: Ida aftermath: Some in Louisiana to be without power for several more weeks

Several states are still cleaning up after Ida’s destruction, which made landfall in Louisiana on Aug. 29 and continued up through the United States before dumping record-breaking rain and killing at least 50 people from Virginia to Connecticut.

Much of Louisiana is still without power, and some parishes weren’t expected to see electricity again for several more weeks.